Joan Laporta admitted Barcelona's contract offer for Lionel Messi will be curbed by the club's financial problems but insisted talks are "going well". 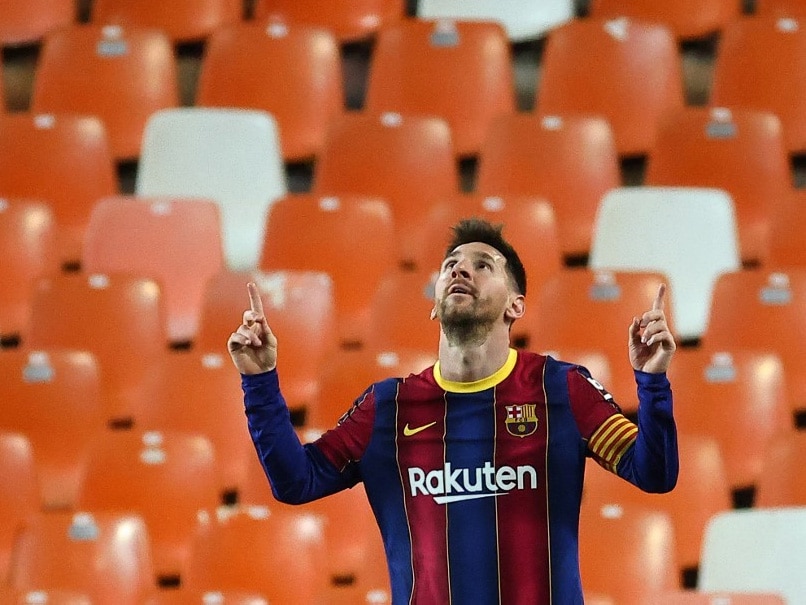 Lionel Messi's contract with Barcelona runs out in the summer.© AFP

Barcelona president Joan Laporta said on Friday he is "moderately optimistic" Lionel Messi will stay but would not guarantee the future of Ronald Koeman, with further talks planned between club and coach next week. Laporta also remained defiant over Barca's continuing membership of the European Super League, insisting they will not apologise and will take UEFA to court if fines are imposed on the three remaining clubs. Lionel Messi's contract expires this summer, allowing the Argentinian to leave for free.

Laporta admitted Barca's offer will be curbed by the club's financial problems but insisted talks are "going well".

"We can make an offer within our means," said Laporta in his first press conference since being voted in as president in March.

"He deserves more and could get a better contract somewhere else but I'm convinced he appreciates the efforts we are making. I think he is keen to stay. For Leo, it's not about money, it's about winning. And that's what we are working on."

Asked how optimistic he is that Messi will stay, Laporta answered: "Moderately optimistic." He added: "The new contract is going well but it's not done yet."

Laporta has also been talking to Koeman this week, with the Dutchman's future in doubt after a disappointing end to the season.

Koeman has a year left on his contract after only being appointed last year.

"He still has a contract in place. We don't believe in transitional projects or seasons. We spoke to Koeman and we will continue to talk to him next week before making a decision."

Laporta said Koeman had recently gone to hospital for a heart problem and that it was important not to rush decisions.

"We are trying to come to an agreement over what we want for next season," Laporta added.

Pep Guardiola and Xavi Hernandez have both been mentioned as possible successors if Koeman leaves.

He was also asked about Barcelona's continued involvement in the Europan Super League, despite nine of the 12 founding clubs quitting the project. Real Madrid and Juventus also remain attached.

The nine clubs that left accepted fines and agreed to commit to UEFA's current competitions but European football's governing body has opened separate disciplinary proceedings against Barca, Madrid and Juventus.

"We are not going to apologise nor do we have any intention of paying a fine," said Laporta. "It has no justification. If they fine us we will go to CAS (Court of Arbitration for Sport) and I'm sure we will win. European law means we are legally allowed to create new competitions."

"When I arrived, the project was already very advanced but it was important for Barca to be involved. Barca will never stand on the sidelines when it comes to new movements in the world of football."

Barcelona have debts of 1.2 billion euros ($1.46 billion), which will restrict their activity in the transfer window.

Laporta said new signings will be announced next week, with Sergio Aguero expected to join on a free transfer from Manchester City. He admitted they will be looking for player-exchange and loan deals this summer.

He said the financial situation will be clearer when an audit is completed in July but admitted some of the findings so far have been "worrying" and "surprising".

"We are fighting to reverse this economic situation," said Laporta. "In a year and a half, maximum two seasons, our club will be financially healthy again."