India had blanked Kenya 3-0 in the league game at the Mumbai Football Arena, which was skipper Chhetri's 100th appearance in national colours. 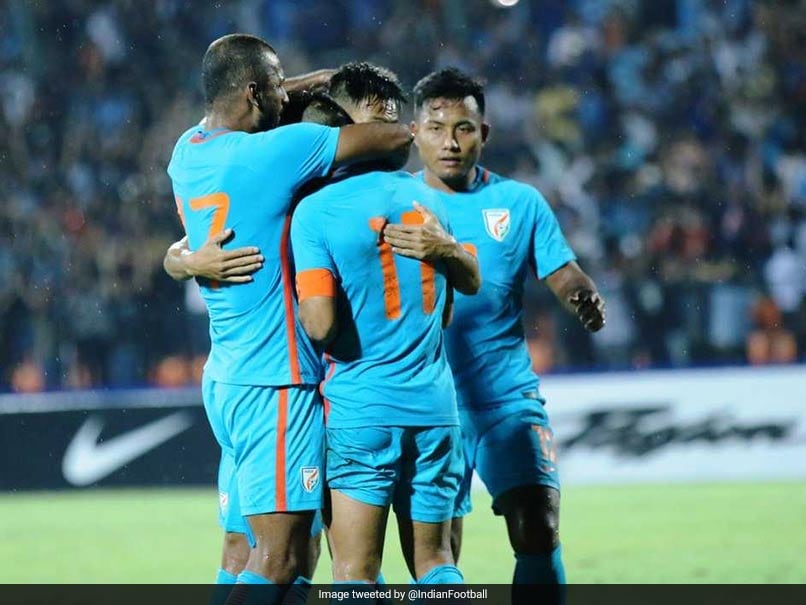 All eyes will again be on India skipper Chhetri, who has 62 goals to his credit© Twitter

India will look to their talismanic striker Sunil Chhetri as they face Kenya in the summit showdown of the Intercontinental Cup on Sunday. The world's third leading scorer, Chhetri have so far found the back of the net in each of the three games, including a hat-trick against Chinese Taipei and a brace against Kenya. The tournament is being used by hosts India as a preparatory ground for the AFC Asian Cup, to be held in January next year, and a win in the final will surely boost their confidence going ahead. India had blanked Kenya 3-0 in the league game at the Mumbai Football Arena, which was skipper Chhetri's 100th appearance in national colours. And the India captain made the game memorable by scoring a brace.

They will look to replicate the performance of their league game against the African side again in the summit clash, which the organisers have claimed to be a 'sold out' match.

The hosts are the side to beat this tournament as they have throughout played an aggressive brand of football. But the Stephen Constantine coached team cannot take Kenya lightly as they have defeated New Zealand 2-1 and blanked Chinese Taipei 4-0 last night. Constantine will ensure that his best playing XI will take the field tomorrow after his strategy of making seven changes initially in the game against New Zealand backfired as the team lost 2-1.

For India, all eyes will again be on Chhetri,who has 62 goals to his credit and will look to add to his tally. He and the experienced Jeje Lalpekhlua can pose challenge to any strong defense and Kenya's would be no exception. India also boast of an array of decent midfielders like Udanta Singh, Anirudh Thapa, Pranay Halder and Halicharan Narzary. They will have to play their roles to perfection if the physically strong Kenyan strikers are to be tamed.

At the back, India have experienced defenders like Sandesh Jhingan and Pritam Kotal. Add to it the likes of Subhasish Bose, and the hosts can make Kenya's life pretty difficult.

And goalkeeper Gurpreet Singh Sandhu, who was benched in the last game, will be back in action. He will have to surely be at his best.

On the other hand, Kenya would have bolstered their confidence after they drubbed Chinese Taipei, and will look to spoil India's party. Kenya coach Sebastian Migne would want his two main strikers -- Ovella Ochieng and Pistone Mutamba -- to go all guns blazing. While Kenya will seek to take revenge of their humiliating loss in the league stage, the home team will look to end the tournament that witnessed an outpouring of emotions after Chhetri's impassioned plea asking fans to turn up for India games, on a positive note.

Kenya Football India vs Kenya, Final
Get the latest updates on IPL 2021, check out the IPL 2021 Schedule and Indian Premier League Live Score . Like us on Facebook or follow us on Twitter for more sports updates. You can also download the NDTV Cricket app for Android or iOS.