Miku scored the only goal of the match in the 41st minute. 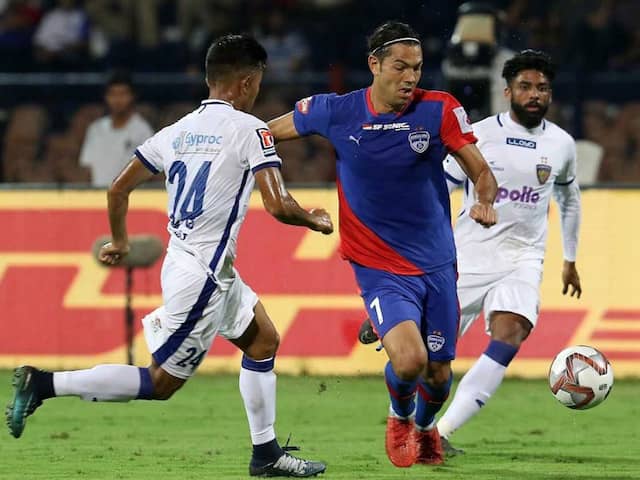 Bengaluru FC got their Indian Super League campaign off to a perfect start with a 1-0 win over defending champions Chennaiyin FC at the Sree Kanteerava stadium on Sunday. In what was a repeat of last season's final at the same venue, Miku's 41st minute strike was enough for the Blues to overcome the visitors' challenge. Chennaiyin FC will be disappointed as they got nothing out of this game, particularly after they were gifted two gild-edge chances to take the lead. Bengaluru, though, were quick to get off the blocks with Eric Paartalu being gifted an excellent chance as early as the third minute.

After some scrappy play in the Chennaiyin box following a throw-in by Rahul Bheke, the loose ball fell to the Australian midfielder's feet but his snap shot was aimed straight at goalkeeper Karanjit Singh.

The visitors started to gain a foothold in the match through their quick breaks as the minutes wore on and they should have drawn first blood midway into the game.

Gregory Nelson and Jeje Lalpekhlua broke at pace following an error by Bheke and Nelson's perfectly threaded through ball left the India striker one-on-one with Gurpreet.

As the Bengaluru goalkeeper rushed forward, Jeje slotted the ball for a completely unmarked Germanpreet Singh but his pass was over-hit with the Chennaiyin midfielder unable to direct it towards an empty goal.

Bengaluru were seeing plenty of the ball but failed to make it count while Chennaiyin continued to look dangerous on the break.

Another Bheke mistake around the half-an-hour mark almost gifted Chennaiyin with a goal after his poor back-pass was intercepted by Jeje. The off-balance Chennaiyin forward had only Gurpreet to beat but lost his footing.

Gurpreet then pulled off a fine save from a long-distance effort by Germanpreet before Bengaluru took the lead against the run of play.

Xisco Hernandez won the ball following a midfield scrap and quickly released Miku behind the Chennaiyin defence with a perfectly weighted pass.

The Venezuelan striker unleashed a thunderbolt of a shot which, despite being aimed at Karanjit's near post, left the Chennaiyin goalkeeper with no chance.

The visitors came close to grabbing an equaliser straight after the interval following a long-throw into the Bengaluru box.

The resulting loose ball fell to Inigo Calderon at the edge of the box whose blocked shot fell to Eli Sabia with his back to goal. The central defender's clever backheel unfortunately was directed straight to the rival goalkeeper.

The visitors took the game to the opposition in the second period with Bengaluru looking dangerous on the break.

One such break in the 72nd minute found Sunil Chhetri with some space in the Chennaiyin box but Calderon was quick to recover and deny the Bengaluru skipper the chance to put the match to bed.

Gregory threw caution to the wind in the closing stages by bringing on striker Carlos Salom for defender Mailson Alves. But while Chennaiyin threw the kitchen sink, the hosts held on to their lead for a perfect start to their campaign.