Chennaiyin FC's Mailson Alves turned out to be the star of the title with a brace. And there was also some Brazilian touch to the game. 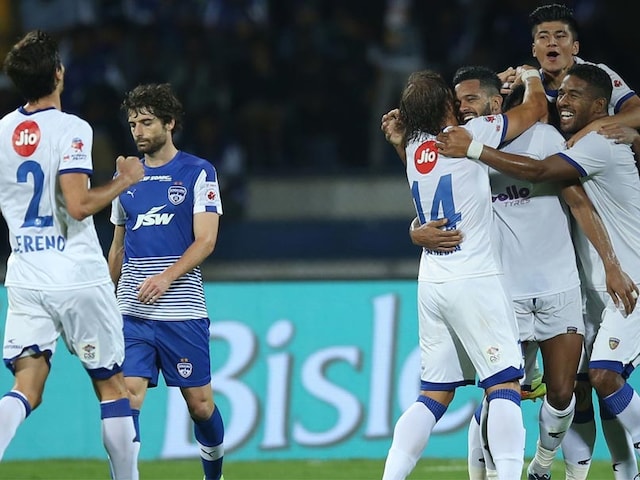 Chennaiyin FC lifted their game to a level befitting the occasion and sent fancied Bengaluru FC crushing to a painful 2-3 defeat, clinching the Indian Super League (ISL) title in style on Saturday.

Chennaiyin FC's Mailson Alves turned out to be the star of the title with a brace. And there was also some Brazilian touch to the game.

Mailson first scored in the 17th minute, which cancelled Sunil Chhetri's ninth minute opener for the hosts, and then propelled his side to a remarkable lead with another leaping header in the 45th minute.

Raphael Augusto, also a Brazilian, added to the home team's agony with his 67th minute strike, leaving the raucous home fans stunned at the Sree Kanteerava Stadium, which was packed to the rafters.

Miku scored for Bengaluru in injury time but that proved to be too little, too late.

Interestingly, four out of the five goals came through headers.

This was Chennaiyin FC's second title triumph in the ISL, tying them with ATK as the most successful team in the tournament.

In their quest to find the equaliser, Bengaluru FC often left gap in the back line, and Chennaiyin took full advantage of that to close out the game.

Entering the final after an unbeaten run of 10 games, Bengaluru FC started it in the earnest and effected the first breakthrough.

Chhetri's opening goal gave Bengaluru FC the advantage they needed early on in the summit showdown.

Chhetri headed in after the impressive Udanta Singh, with a great burst of pace down the wings, made the assist.

Bengaluru, who played in 3-4-3 formation, were dominant in the first 10 minutes.

The home team's joy, though, was short lived as Alves jumped high to meet Gregory Nelson's corner and headed in the equaliser.

Bengaluru had their second chance to score, but it turned out to be a pretty bad miss inside the box from Dimos Delgado in 30th minute, after he received Inigo Calderon's header.

In 43rd minute, Miku took a shot from the edge of the box, but the ball sailed over the cross, leaving Karanjit Singh in great relief.

As the half time approached, Mailson found himself at the right place as the centre half rose as high as possible to head in one more time off a set piece past a hapless Gurpreet Singh Sandhu.

A minute before, Chhetri went for the goal from outside the box, but ball sailed straight into hands of Karanjit.

In a counter-attack, Calderon's cross from the right flank inside the box was very well collected by Gurpreet Singh Sandhu.

Bengaluru FC tried to create openings in the second half but it was the visiting side that tasted success, with Augusto finding the back of the net.

Udanta once managed to find the back of the net but that was flagged off by the linesman in what was a very tight call.

Comments
Topics mentioned in this article
Chennaiyin FC Bengaluru FC Indian Super League Football
Get the latest updates on IPL 2020, check out the IPL Schedule for 2020 and Indian Premier League (IPL) Cricket live score . Like us on Facebook or follow us on Twitter for more sports updates. You can also download the NDTV Cricket app for Android or iOS.