Gareth Bale scored in the 44th, 53rd and 55th minutes at the Zayed Sports City Stadium. 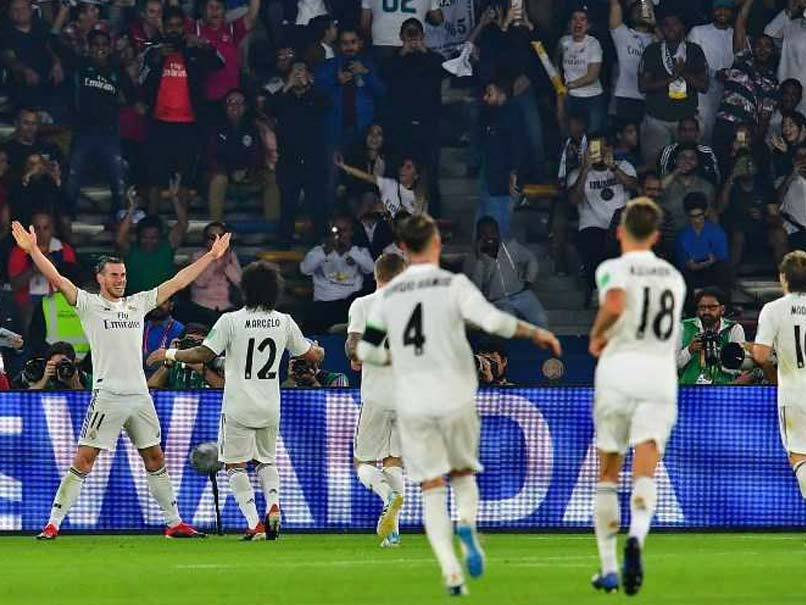 Gareth Bale now has 10 goals in 21 games for Real Madrid this season.© AFP

Gareth Bale hit an 11-minute hat-trick on Wednesday as Real Madrid strolled into the Club World Cup final by beating Kashima Antlers 3-1 in Abu Dhabi. Bale scored in the 44th, 53rd and 55th minutes at the Zayed Sports City Stadium to put Madrid within touching distance of a record fourth success in this competition, and their third triumph in a row. Real are currently tied with their La Liga rivals Barcelona, having each won it three times before, but it would be a major surprise if the European champions were not hoisting the trophy again on Saturday, when they face hosts Al Ain in the final.

Bale had missed the 1-0 victory over Rayo Vallecano last weekend with an ankle problem but he was in irresistible form, albeit against limited opposition.

The Welshman joins Lionel Messi and Cristiano Ronaldo as the only player to score in three separate Club World Cup tournaments while his treble, coming either side of half-time, is the fastest in the history of the competition.

"Bale ate everything today, the floodlights, the stands, the nets," coach Santiago Solari said. "He has shown what a player he is and what he can do. So let him rest and eat the nets again on Saturday."

Kashima Antlers, from Japan's J1 League, qualified after winning the Asian Champions League last month but, despite a lively start and a late consolation from Shoma Doi, they were clearly second best.

Bale now has 10 goals in 21 games for Real Madrid this season while victory will also come as a relief to Solari.

A handful of underwhelming performances had been badly timed given the sacking of Jose Mourinho by Manchester United, with speculation linking the Portuguese with a return to the club never far away.

"We see the final as a reward for this team that has been together a long time and given great joy to Madrid fans," Solari said.

Madrid were still sleeping during the opening 10 minutes and Antlers should have led, as Serginho's shot was tipped wide by Thibaut Courtois before Gen Shoji failed to connect with a free header three yards out.

They soon found their rhythm, however, with Karim Benzema twice shooting straight at the goalkeeper while Bale had an effort blocked after nipping between the Antlers central defenders.

Madrid's front two were tying Antlers in knots and two minutes before half-time, Bale struck. A neat one-two with Marcelo on the edge of the area set him in behind and Bale guided the bouncing ball into the far corner.

Benzema had a shot cleared off the line at the start of the second half but Madrid did not have long to wait.

Bale scored twice in as many minutes as first, he capitalised on a poor backpass from Shuto Yamamoto and then drove into the far corner after Marcelo had, again, teed him up.

Three clear, Madrid were home and dry, and Bale departed on the hour, replaced by Marco Asensio while Casemiro, recovered from an ankle injury, came on to make his first appearance since November 12.

Antlers pulled one goal back with 13 minutes left as Doi drove in after Yasushi Endo headed down. Initially ruled offside, VAR showed Endo was level but a comeback never looked likely.

Real Madrid Gareth Bale Football
Get the latest updates on SA vs IND 2021-22, check out the Schedule and Live Score . Like us on Facebook or follow us on Twitter for more sports updates. You can also download the NDTV Cricket app for Android or iOS.