Thiago Alcantara, who is being heavily linked with a move to Liverpool, and David Alaba both have just a year left on their Bayern Munich contracts. 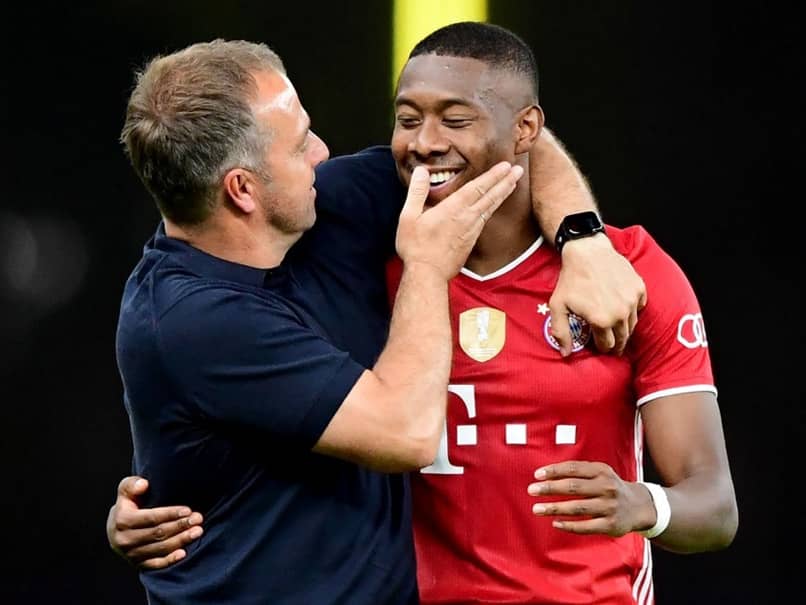 Bayern Munich coach Hansi Flick says he is determined to keep defender David Alaba and midfielder Thiago Alcantara, who has been linked to a move to Liverpool. "I will do everything I can to ensure that we can keep two such quality players," said Hansi Flick after the Bundesliga champions completed the double with a 4-2 win over Bayer Leverkusen in the German Cup final on Saturday. "I'm trying to keep the squad together as it is at the moment."

Both Alaba, who scored the opening goal in Berlin, and Alcantara, a second-half replacement in the cup final, only have a year left on their contracts.

Alcantara, 29, is of particular concern as the Spanish media has linked him to a move to Liverpool, but Bayern chairman Karl-Heinz Rummenigge says no offer has yet been received.

"We have negotiated with him seriously and granted all his wishes, but it looks like he wants to do something new at the end of his career," Rummenigge told daily Bild.

However, Flick hopes to persuade Alcantara, who joined Bayern in 2013: "I'll do my best to make sure he stays.

"You could seen that he identifies 100 per cent with the club," Flick added after the Spaniard enthusiastically took part in the cup final celebrations.

Flick also thinks Robert Lewandowski, the man-of-the-match after scoring twice in Berlin to leave him on 51 goals this season, is a Ballon d'Or candidate.

"When you see that he has scored 34 times in the league, it's quite enough to make you think that a player from the Bundesliga could be world footballer of the year," Flick said as Lewandowski was crowned German league top-scorer last weekend for the fifth time.

Bayern, who are chasing the treble, are among the favourites for the Champions League knock-out stages to be held in Lisbon next month.

Thiago David Alaba Football
Get the latest updates on India vs England Series, India vs England , live score and IPL 2021 Auction . Like us on Facebook or follow us on Twitter for more sports updates. You can also download the NDTV Cricket app for Android or iOS.