Buffon, who played a record 176 times for Italy, has an option to extend his stay at the Parc des Princes for a further season. 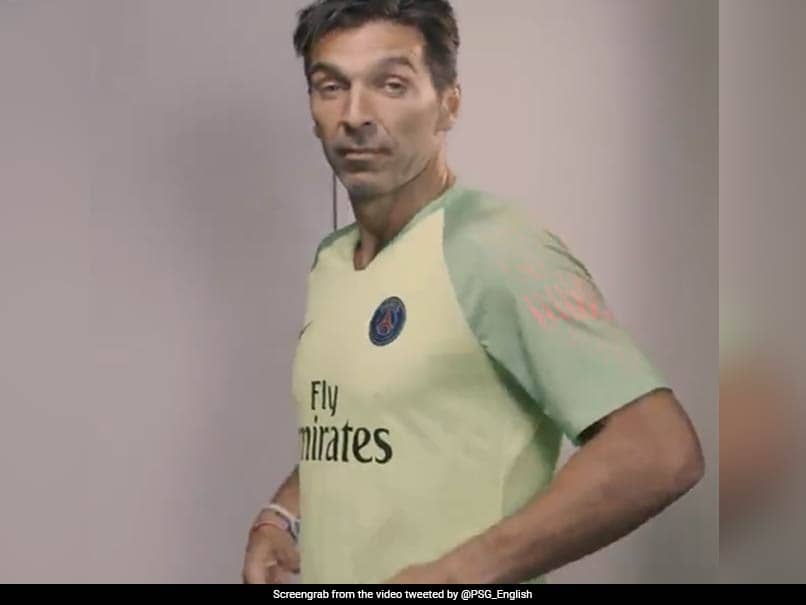 Gianluigi Buffon will be unveiled as the latest member of PSG on Monday.© Twitter

Veteran Italian goalkeeper Gianluigi Buffon has joined Paris Saint-Germain on a one-year deal, the French Ligue 1 champions announced on Friday. The 40-year-old 2006 World Cup winner joins the big-spending Parisian side days after his contract with Juventus ended in June. "We all feel an immense pride in welcoming Gianluigi Buffon into the great Paris Saint-Germain family," PSG's Qatari president Nasser Al-Khelaifi announced in a statement. Confirmation of Buffon's move came after he had arrived at PSG around midday accompanied by his doctor. He was also seen at the American Hospital in the nearby suburb of Neuilly.

Buffon, who played a record 176 times for Italy, has an option to extend his stay at the Parc des Princes for a further season.

He will be officially unveiled as the latest teammate of PSG stars Neymar and Kylian Mbappe and company on Monday.

The first signing since German Thomas Tuchel took over as PSG manager in May said he was thrilled at his new job outside Italy.

"For the first time in my career, I am leaving my country and only a project this ambitious could have encouraged me to make such a decision," he said.

"I am going to bring all my energy, all my experience and all of my thirst to win to help my new club achieve all the great objectives it has set out for the future."

The serial French champions' overriding ambition is to finally be crowned European champions, something which has also eluded Buffon in his stellar career.

"His arrival reaffirms our will to always go higher, an ambition that we intend to pursue with a determination just as strong," said Al-Khelaifi.

Al-Khelaifi suggested Buffon and PSG were an ideal match.

"At 40 years old, his passion for football is intact and Gianluigi has found the ideal environment in our project to set himself extremely high objectives transmitting his experience, not only to the other goalkeepers at the club, but to all of our players."

Ironically, given his and the club's desire to finally sate their Champions League hunger, Buffon is unavailable for PSG's opening three European matches next season.

That's as a result of the ban handed down by UEFA for his red card and attack on referee Michael Oliver after Juve's dramatic Champions League quarter-final loss to Real Madrid.

Buffon had been charged both with breaching UEFA's "general principles of conduct" over his outburst and also for his red card for dissent.

The last-eight clash between holders Real and Juventus was decided by a last-gasp Cristiano Ronaldo penalty after the Serie A champions had staged a remarkable comeback to wipe out a 3-0 first-leg deficit at the Santiago Bernabeu.

But Buffon, who was sent off in the aftermath of the penalty decision, lashed out at Oliver's decision to award the spot-kick, saying the English official had a "rubbish bin for a heart".

He joins a PSG keeper roster comprising Kevin Trapp, who was part of Germany's squad at the World Cup, and Alphonse Areola, who is with semi-finalists France in Russia.

Paris SG Gianluigi Buffon Football
Get the latest updates on India vs Australia Series, check out the India vs Australia Schedule for 2020-21 and Ind vs Aus live score . Like us on Facebook or follow us on Twitter for more sports updates. You can also download the NDTV Cricket app for Android or iOS.