Germany, Netherlands To Meet In Euro 2020 Qualifying As England Given Clement Draw

The Germans were the most dangerous team outside the first pot of seeds for the competition. 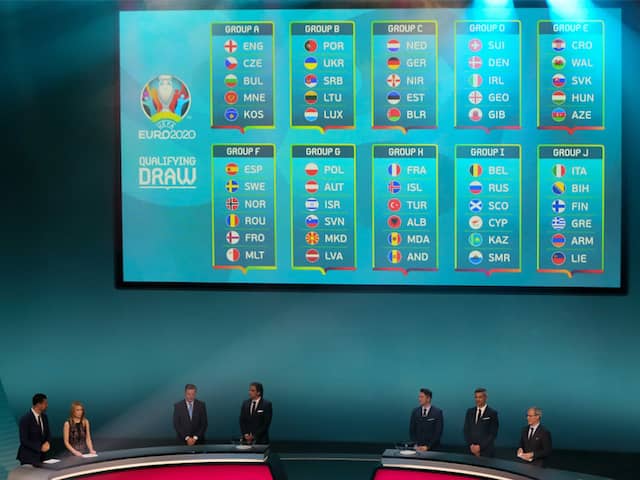 Former champions Germany and the Netherlands will meet each in qualifying for Euro 2020.© AFP

Former champions Germany and the Netherlands will meet each in qualifying for Euro 2020 after being paired together in Sunday's draw in Dublin, but World Cup semi-finalists England have little to complain about. The Germans were the most dangerous team outside the first pot of seeds for the competition, relegated due to poor recent results which included losing to the Dutch in the Nations League. Joachim Loew's side will also face Northern Ireland, who they met at the Euro 2016 finals, as well as Estonia and Belarus in Group C.

"The group is typically tough, I'd say. The Netherlands and Germany are the favourites, but it should be enough for both (to go through)," said Germany head coach Joachim Loew.

The top two teams in each of the 10 groups will qualify for Euro 2020, which for the first time will be staged in 12 different venues across the continent, including Amsterdam.

And having missed out on both Euro 2016 and this year's World Cup, Dutch coach Ronald Koeman insisted qualifying rather than scoring another victory over Germany is his priority.

"If you look back how it was one year ago and how the public were with the national team, it is totally different at this stage," said Koeman, who has led the Netherlands to the final four of the Nations League.

"They have a lot of belief in the team, the team is showing a good development and now the target is to qualify for the tournament. We need to be there."

The semi-finals and final will be played at Wembley, handing England a major incentive to go on and win the competition, fresh from reaching the last four at this year's World Cup.

Gareth Southgate's side will be happy with a draw which places them in Group A along with the Czech Republic, Bulgaria, Montenegro and Kosovo.

England are in a section with just five teams rather than six because they have qualified for the Nations League semi-finals, which will be held next June in Portugal. The draw for the last four will take place on Monday.

World Cup winners France will meet Iceland and Turkey as well as Albania, Moldova and Andorra in Group H.

But with the top two in each group qualifying, and the safety net of play-offs to determine the last four qualifiers related to final positions in the recent Nations League, the prospect of any leading nation missing out on Euro 2020 is extremely slim.

The task looks tougher for Scotland as they aim to reach a major tournament for the first time since the 1998 World Cup -- they must take on Belgium, Russia, Cyprus, Kazakhstan and San Marino in Group I.

Scotland have, at least, already secured a play-off spot after topping their Nations League section.

The draw hosts Republic of Ireland benefited from a rule that only two of the 12 hosts for the final tournament could be drawn in the same group as they avoided the Netherlands and Germany and neighbours Northern Ireland took their place.

New manager Mick McCarthy will instead meet Switzerland and Denmark in Group D as well as Georgia and Gibraltar.

Wales must take on World Cup runners-up Croatia in Group E alongside Slovakia, Hungary and Azerbaijan.

Arguably the toughest group is Group F in which Sweden, Norway and Romania will likely compete for one berth behind Spain.

The qualifiers will begin in March, with the final round of games in November 2019.