"Felt Red Card Could Bottom Everything Out": Gareth Southgate Admits To Being Worried About Harry Maguire

Harry Maguire looked distraught as he was sent off in the first-half against Denmark last month, and England ended up losing the match by a solitary goal. 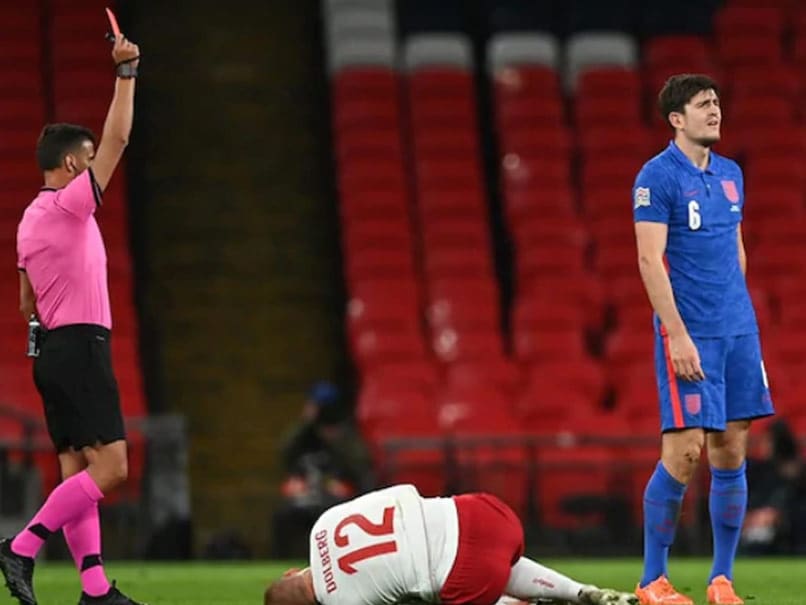 England manager Gareth Southgate has admitted that he got worried about Harry Maguire's career when the Manchester United skipper was sent off against Denmark in the Nations League. Maguire looked distraught as he was sent off in the first-half against Denmark last month, and England ended up losing the match 0-1.

The 27-year-old also witnessed a dip in form after he was found guilty of aggravated assault, resisting arrest, and repeated attempts of bribery after an incident in Greece in August.

However, Maguire has slowly started returning to form and also scored for Manchester Unitedduring their 4-1 win over Newcastle United. He also scored for England in their match against Republic of Ireland.

"I was really pleased with Harry. I felt that the red card could bottom everything out. You could see on his face when he was walking off the pitch that night [against Denmark], how he was just having one of those spells where he must have felt everything was against him," Goal.com quoted Solskjaer as saying.

"I had some good conversations with him and I know his club would have supported him and his club performances were solid after that. Against Ireland I thought it was important to get him back in an England shirt. It was a lovely moment for him to captain the team and to get the goal as well is a real boost - so that was great to see," he added.

England are currently preparing for two UEFA Nations Leaguefixtures against Belgium and Iceland.

England are currently in third place in Group 2 in the UEFA Nations League and the side is level on points with Denmark.

Only the group winner will progress to the Nations League semi-finals.

England will need to defeat Belgium to remain in contention for the semi-final spot otherwise they will need to make up a significant goal difference in their final match versus Iceland and hope Belgium loses to Denmark.

Manchester United Harry Maguire Football
Get the latest updates on ICC T20 Worldcup 2022, check out the Schedule and Live Score. Like us on Facebook or follow us on Twitter for more sports updates. You can also download the NDTV Cricket app for Android or iOS.