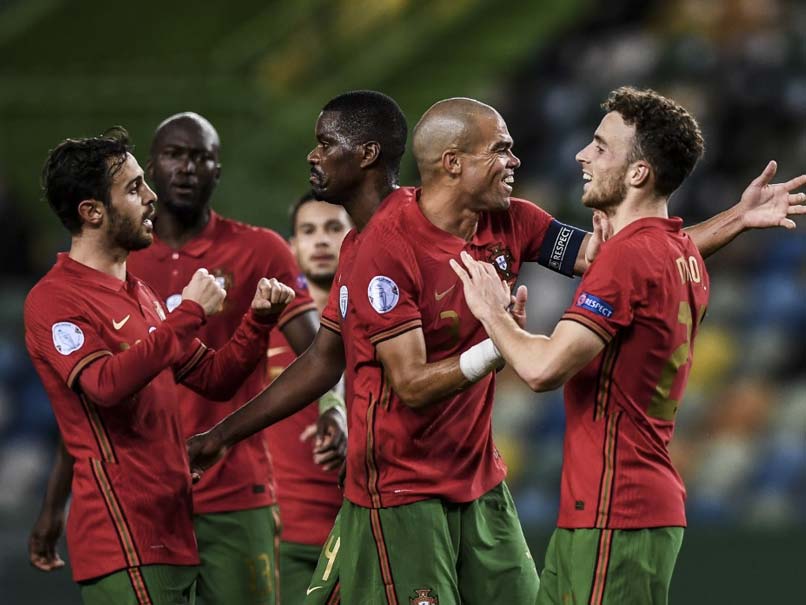 Portugal registered a comfortable 3-0 victory over Sweden on Wednesday.© AFP

Portugal made light of Cristiano Ronaldo's absencedue to a positive coronavirus test to see off Sweden 3-0 on Wednesday and stay top of their Nations League group. A Diogo Jota brace and another strike from Bernardo Silva were enough to stay level on 10 points with France and hold onto first place in League A Group 3. Ronaldo, who was pictured watching the match on television wearing a Portugal top, was forced to leave the national team camp after returning a positive test for Covid-19 on Tuesday.

The Juventus forward returned to Italy on Wednesday to continue his self-isolation.

His Portugal teammates had few problems dealing with Sweden, who have now lost all four of their Nations League matches and are rock bottom of the group.

The Swedes are three points behind Croatia, who were beaten 2-1 by France in Zagreb.

Silva curled home the opener in the 21st minute thanks to unselfish play from Jota, who laid on the Manchester City midfielder instead of going for goal himself in a promising position.

Fellow Premier League star Jota made it two just before the break when, completely unmarked, he chested down Joao Cancelo's beautifully flighted pass and slotted home.

The new Liverpool signing then put the result beyond any doubt in the 72nd minute with a superb individual goal, weaving in from the left before drilling a low finish past Sweden goalkeeper Robin Olsen.

Sweden Bernardo Silva Football
Get the latest updates on SA vs IND 2021-22, check out the Schedule and Live Score . Like us on Facebook or follow us on Twitter for more sports updates. You can also download the NDTV Cricket app for Android or iOS.