Defender Joe Bryan was the unlikely hero for Scott Parker's side in the Championship play-off final, scoring two goals in extra time. 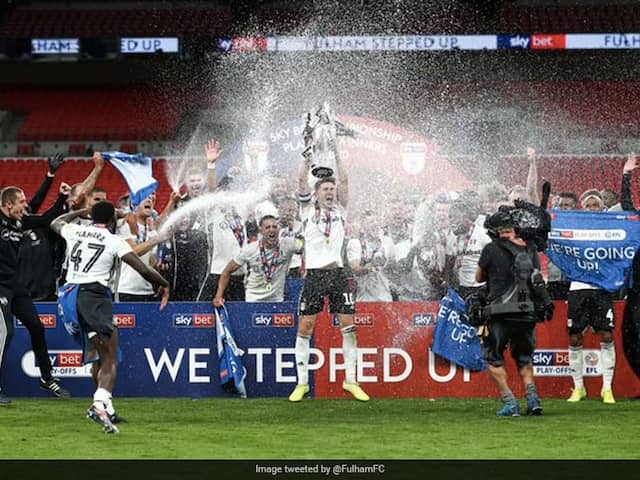 Fulham made an instant return to the Premier League on Tuesday, beating Brentford 2-1 at Wembley in what is regarded as the most lucrative game in world football. Defender Joe Bryan was the unlikely hero for Scott Parker's side in the Championship play-off final, scoring two goals in extra time after the London clubs were locked at 0-0 at the end of a cagey 90 minutes.

Henrik Dalsgaard scored a late consolation for Brentford but it was too little too late for Thomas Frank's team, who have not played in the English top-flight for 73 years.

The Craven Cottage club will earn around £135 million ($176 million) for bouncing back from relegation last season and this result also gives rookie boss Parker a first success of his fledgling managerial career.

"We've done what we've done tonight, but there's still improvement, and that's what makes me so proud and happy," Parker told Sky Sports.

"For all of the good players and everything you see, what makes me so happy I see a group of players who only a year ago were struggling psychologically, didn't have a mindset or mentality.

"I've driven this team every single day and what makes me proud is I stood on the touchline tonight and have seen a team that represents what I've been saying over the last 12 months."

Left-back Bryan broke the deadlock for Fulham in the 105th minute when he made the most of a costly misjudgement by Brentford goalkeeper David Raya.

While Raya and everyone else expected a cross from a free-kick 35 yards out, Bryan beat the goalkeeper at his near post to break the deadlock.

The goal sparked wild celebrations, which only grew in the 117th minute when Bryan got forward again and exchanged passes with substitute Aleksandar Mitrovic before finding the net again.

Promotion was confirmed for Fulham but only after Henrik Dalsgaard had pulled one back for Brentford with seconds to go, heading home after Christian Norgaard had knocked a free-kick across the face of goal.

Brentford, who beat Fulham twice in the league this season, finished third in the Championship table, ahead of their London rivals on goal difference.

The result is a bitter blow for Brentford, who were on the brink of automatic promotion last month before successive defeats against lowly Stoke and Barnsley forced them to settle for a third-place finish behind Leeds and West Brom.

"Of course it's tough when you lose a final like this in a very tight game but I'm extremely proud of my players," said Frank.

"We have gone from a mid-table club to a team who, in the league table, was the third-best team. We are very fine margins away from the Premier League, which is an incredible achievement from us."

Fulham Joe Bryan English Premier League Brentford Football
Get the latest updates on IPL 2020, check out the IPL Schedule for 2020 and Indian Premier League (IPL) Cricket live score . Like us on Facebook or follow us on Twitter for more sports updates. You can also download the NDTV Cricket app for Android or iOS.