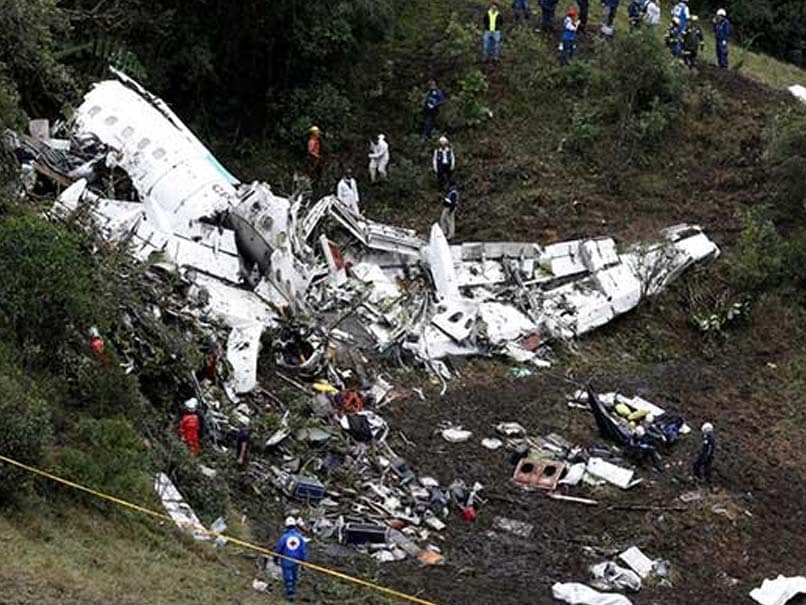 The football world mourned after a plane carrying a Brazilian team crashed in the mountains in Colombia, killing 76 people but miraculously leaving six survivors, officials said.

Football legends Pele and Maradona as well as current superstars Lionel Messiand Cristiano Ronaldo led tributes to the players of Chapecoense Real, a humble team whose march to glory was cut abruptly short.

Having risen only recently from obscurity, the team was on its way to play in the finals of the Copa Sudamericana, South America's second-biggest club tournament, when disaster struck.

"The pain is terrible. Just as we had made it, I will not say to the top, but to have national prominence, a tragedy like this happens," club vice-president Ivan Tozzo told Globo SportTV.

"It is very difficult, a very great tragedy." Colombia's civil aviation authority initially said 75 people were killed, but it later emerged that four people on the passenger manifest had not in fact boarded the plane -- a club official, a journalist, the mayor of the team's hometown and the city council president.

"It's one of those things in life. Only God knows why I ended up staying behind," the mayor, Luciano Buligon, told Brazil's TV Globo.

The six survivors are being treated in hospital, officials said.

The charter plane, flown by Bolivian company LAMIA, departed from the Bolivian city of Santa Cruz and declared an emergency at around 10:00 pm Monday (0300 GMT Tuesday).

It reported "electrical failures" and crashed soon after near the city of Medellin, its destination, officials said. Governor Luis Perez of Antioquia department, where the plane went down, said investigators had found its two black box recorders.

He said a crew member had reported that "the lights on the aircraft suddenly went out."

The British Aerospace 146 airliner was first sold as new in 1999 and was used by two other airlines before being acquired by LAMIA, a spokesman for the manufacturer told AFP.

Specialist sites revealed that the same plane was used two weeks ago to fly the Argentine national team with Messi on board to San Juan, Argentina for a World Cup qualifying match. Britain's Air Accidents Investigation Branch said it was sending investigators along with representatives of the plane's manufacturer BAE Systems to Colombia to help with investigations.

Scores of rescuers picked through the wreckage of the white fuselage, plastered over a remote hillside in northwestern Colombia.

The plane went down about 50 kilometers (30 miles) from Medellin, the country's second city, in a remote mountain area called Cerro Gordo.

"We found ourselves faced with a disastrous scene. The plane was completely destroyed," fire service captain Elkin Gonzalez told AFP.

Rescuers and aviation authorities said the survivors were three players, two crew members and a journalist.

"I have just seen the plane and given the state it is in, it is a miracle that six people survived," said Perez, the regional governor.

His last-minute save in the semi-final had ensured the team made it through to the Copa Sudamericana final.

The cup final first-leg had been scheduled for Wednesday against Atletico Nacional of Colombia.

In an emotional gesture, Nacional called in a statement for the title to be handed to its Brazilian opponents "as a posthumous homage to the victims of the fatal accident that has put our sport in mourning."

Regional football confederation CONMEBOL suspended the game. It had yet to announce how the title would be settled.

A source close to CONMEBOL told AFP it was "very unlikely" that the final would ever be played.

Chapecoense is seen as one of the minnows of Brazilian club football. It was founded in 1973 in the city of Chapeco in southern Santa Catarina state.

After decades in the lower divisions, Chapecoense returned to Brazil's top flight Serie A in 2014 for the first time since 1979.

"We have moved from a dream to a true nightmare," said Buligon, the mayor.