Liverpool, third in the Premier League, will host second-tier Wolverhampton Wanderers in the FA Cup round four on January 28. 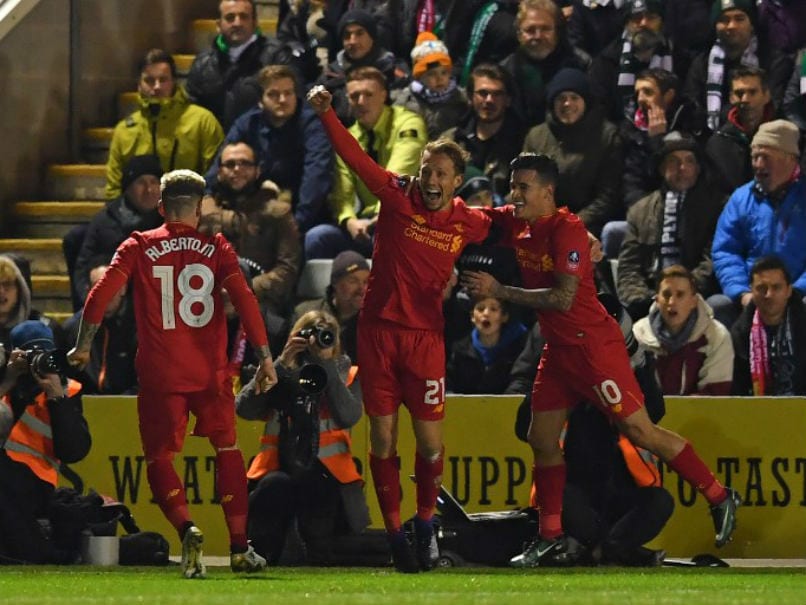 Lucas celebrates with teammates after scoring for Liverpool vs Plymouth in the FA Cup.© AFP

"Every week in training we play old versus young and he is a top scorer for old, which is unbelievable," Liverpool manager Jurgen Klopp said of Lucas's goal.

"Maybe it wasn't the most exciting game, but for us it's very important as it's another game for a few of the young boys, so that's all good."

Liverpool, third in the Premier League, will host second-tier Wolverhampton Wanderers in round four on January 28.

Lucas did a jig of joy after he evaded the attentions of his marker to head the ball past McCormick at Home Park.

It was his first goal since a Europa League tie against Steaua Bucharest in September 2010.

The goal also vindicated Klopp's decision to put Coutinho in his starting line-up for the first time since he limped off injured in the 2-0 defeat of Sunderland at Anfield in late November.

Coutinho helped ensure the Premier League side dominated the opening exchanges of their contest with the League Two promotion contenders.

Despite the setback of conceding, Derek Adams's home side rallied and carved out a couple of chances themselves.

But Loris Karius pulled off a fine save to tip away Graham Carey's long-range shot before Trent Alexander-Arnold denied Arnold Garita with a smart interception.

It was far from plain sailing for Liverpool in a place known as Britain's 'Ocean City' and Karius found himself placed under pressure as Argyle raised their game.

Adams had to go into the game without striker David Goodwillie after a civil court judge ruled that he and former Dundee United team-mate David Robertson raped a woman in 2011.

Plymouth started where they had left off after the break, but Karius dealt comfortably with David Fox's low drive.

Liverpool striker Daniel Sturridge wasted a decent chance from a tight angle and Origi had a powerful shot saved by McCormick.

Klopp decided to withdraw Coutinho in favour of the club's Under-23s captain Harry Wilson, who made his senior debut.

The Welsh youngster almost doubled the lead when he charged down McCormick's clearance, but the ball sailed just over the bar.

The visitors had a narrow escape when Jake Jervis saw his acrobatic volley graze a post, setting the scene for a nervous finale.

Origi should have doubled the lead from the penalty spot after Yann Songo'o felled Alberto Moreno, but his effort was superbly saved by McCormick, diving low to his right.

"Overall I thought it was a very good performance from us. In the end we lost one goal over two games to Liverpool," Plymouth manager Adams told BT Sport.

"The players can be proud of themselves tonight. The supporters showed their appreciation throughout."

Comments
Topics mentioned in this article
Liverpool Plymouth Argyle Lucas Leiva Philippe Coutinho Divock Origi Football
Get the latest updates on IND vs NZ 2021, check out the Schedule and Live Score . Like us on Facebook or follow us on Twitter for more sports updates. You can also download the NDTV Cricket app for Android or iOS.