Manchester United beat AC Milan 1-0 on Thursday to advance to the Europa League quarter-finals 2-1 on aggregate. 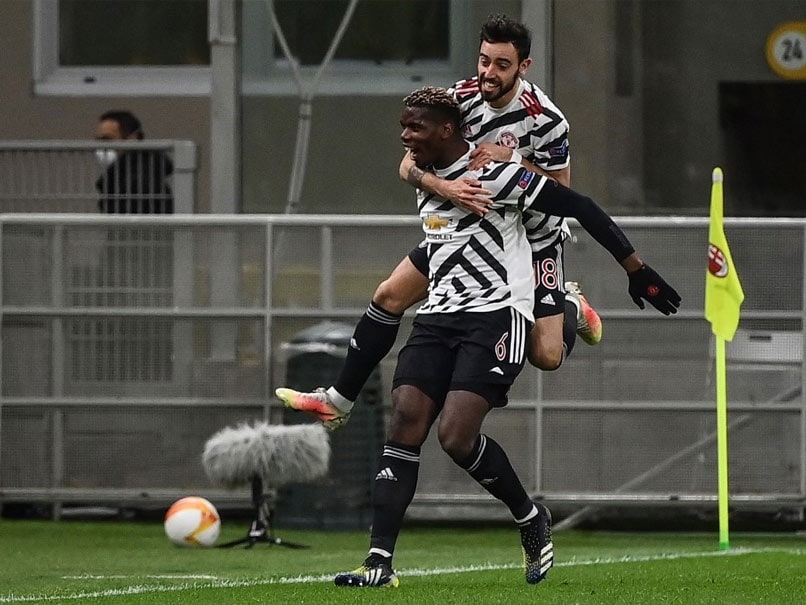 Paul Pogba returned from injury to score the winner as Manchester United beat AC Milan 1-0 on Thursday to advance to the Europa League quarter-finals 2-1 on aggregate. World Cup winner Pogba had been sidelined for over five weeks with a hamstring injury. But the 28-year-old Frenchman scored four minutes after coming off the bench at the start of the second half in the last 16, second leg clash at the San Siro. Coach Ole Gunnar Solskjaer welcomed Pogba's return as "a big, big boost for us".

"The boys have done remarkable without Paul but we know his qualities.

"He makes a very, very big difference to us. Paul has been working really hard, but you could see he couldn't play more than 45 minutes.

"We had to readdress a couple of things in the second half when I think we were much, much better

"We want to go all the way, it was hard to lose in the semi-finals (last year)."

Zlatan Ibrahimovic also returned from a thigh injury for Milan, the Swede coming on after an hour but despite threatening could not find a way past his former club.

"This elimination is a big disappointment," said coach Stefano Pioli.

"We played like a great team but we should have scored a goal in the first half tonight.

"Manchester are a very strong team that got to the semi-finals of the Europa League last year, a team that beat Manchester City 10 days ago.

"It's tough be we have to bounce back immediately in the league."

Milan had a slight advantage against 2017 winners United thanks to Simon Kjaer's stoppage-time away goal in the first leg at Old Trafford.

Solskjaer named an unchanged side from the first leg, sticking with the team that beat West Ham at the weekend in the Premier League.

Anthony Martial and Edinson Cavani remained out injured but Marcus Rashford returned as a starter, with Pogba and Donny van de Beek back on the bench.

United put the hosts under pressure early, but the 'Rossoneri' got into their stride as the first half progressed.

Samu Castillejo pulled a pass back for Franck Kessie after 25 minutes, but a Victor Lindelof sliding tackle averted the danger for United.

Kessie was impressive in midfield, the Ivorian sending through an unmarked Alexis Saelemaekers only for Dean Henderson beat away the Belgian's effort.

Rade Krunic missed a chance to break the deadlock before the break when he shot wide just before half time.

Pogba came off the bench in place of Rashford after the break and had an immediate impact.

The former Juventus player blasting into the top of the net from close range following a scramble on front of the Milan goal.

Mason Greenwood tried his chance from a distance just after but Gianluigi Donnarumma made a save.

Ibrahimovic came on after 65 minutes in place of Castillejo along with Manchester United loanee Diogo Dalot.

And the Swede almost broke through seven minutes later, getting his head to a Hakan Calhanoglu cross, rising above Luke Shaw with Henderson doing well to punch the header out.

United held on with Pogba almost doubling their account with a header two minutes from time.

"I was sure my header would go in but it didn't," said Ibrahimovic.

"We did well throughout the game, we created many chances, but if you don't score then the moment comes when their pressing led us to an error that cost us dearly because of Pogba's goal.

"Everyone knows how strong (Pogba) is, it's no secret. He's not strong, he's very strong."

Zlatan Ibrahimovic Football
Get the latest updates on IPL Auction 2023 and check out  IPL 2023 and Live Cricket Score. Like us on Facebook or follow us on Twitter for more sports updates. You can also download the NDTV Cricket app for Android or iOS.