Leander Dendoncker struck late to snatch a 1-1 draw for Anderlecht against Manchester United in the first leg of Thursday's Europa League quarter-final, while crowd trouble overshadowed Lyon's tie with Besiktas. 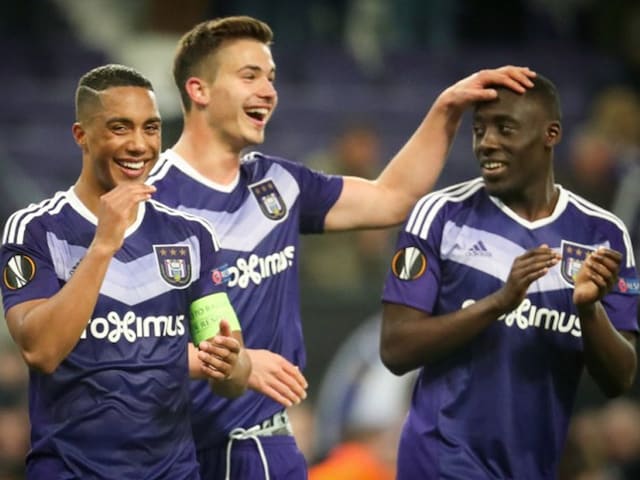 Leander Dendoncker struck late to snatch a 1-1 draw for Anderlecht against Manchester United in the first leg of Thursday's Europa League quarter-final, while crowd trouble overshadowed Lyon's tie with Besiktas. Belgian international midfielder Dendoncker rose to majestically power home a header from Ivan Obradovic's cross four minutes from time and cancel out Henrikh Mkhitaryan's first-half opener. It was no less than Anderlecht deserved for a committed second-half display, although United will rue not taking earlier chances to kill off the tie ahead of next week's return at Old Trafford.

In Lyon, Turkish fans clashed with rival supporters and security forces in the run-up to kick-off before fans spilled onto the pitch causing a 45-minute delay to a match designated as high-risk by authorities.

With United potentially facing two matches a week right through to the end of the season, Jose Mourinho had been hoping for a quiet night to conserve energy ahead of Sunday's crunch Old Trafford clash against Chelsea.

United haven't beaten Chelsea in their last 12 attempts and with their Europa League progression anything but secured and a top-four finish in the Premier League to fight for, that match will take on added significance in the battle for Champions League qualification.

United should have won but Anderlecht had their moments, particularly at the beginning of both halves.

They created the first clear chance but Massimo Bruno connected only with thin air when well placed on the edge of the box.

Frank Acheampong was lively down the Anderlecht left, with one low cross begging to be knocked in but evading everyone.

Yet United soon started to assert their class and were a lick of paint from going in front when Marcus Rashford's inswinger picked out Zlatan Ibrahimovic. Ruben Martinez made a point blank save and Jesse Lingard knocked the follow-up onto the post before Anderlecht scrambled the ball clear.

Bram Nuytinck then threw himself full length to block a Mkhitaryan shot from 18 yards as United started to turn the screw.

Serigne Mbodji was next to produce a desperate last-ditch tackle to deny Lingard but by now Mkhitaryan was dictating play.

United were at times guilty of over-playing in the final third but the chances were starting to rack up.

And Mkhitaryan opened the scoring on 36 minutes after Rashford's volley from Antonio Valencia's cross was only parried by Martinez, the Armenian running on to slot home from close range despite a tight angle. It had been coming.

Anderlecht started the second half with renewed vigour as Nicolae Stanciu curled a free-kick just over the bar and then Valencia was forced into three interventions in quick succession, first hooking a Bruno effort off the line and then twice blocking Acheampong.

United were looking ragged and Anderlecht fashioned another chance but a stumbling Obradovic dragged his effort well wide.

United at times lived dangerously but Anderlecht didn't have the quality to capitalise, even with the introduction of semi-fit top scorer Lukasz Teodorczyk 15 minutes from time.

United's Belgian international Marouane Fellaini -- formerly of Standard Liege -- provided an entertaining 15-minute substitute cameo, provoking a cacophony of jeers from the home crowd every time he touched the ball.

He even had a chance from 20 yards that drew nervous gasps from the home crowd, although it deflected into Martinez's arms.

Pogba could have all but finished off the tie seven minutes from time but his weak shot found only Marintez's legs.

And Dendoncker had the last word with Anderlecht's only shot on target.

Elsewhere, Davy Klaassen struck twice to power Ajax to a 2-0 win over Schalke in Amsterdam as Dutch striker Klaas-Jan Huntelaar made an unhappy return to his former club.

Celta Vigo will take a 3-2 advantage into the return against Belgian side Genk after first-half goals from Pione Sisto, Iago Aspas and John Guidetti in Spain.

But Genk will remain confident of progressing to the last four thanks to strikes from Jean-Paul Boetius and Thomas Buffel.

Comments
Topics mentioned in this article
Manchester United Anderlecht Celta Vigo Ajax FC Schalke 04 Genk Leander Dendoncker Football
Get the latest Cricket news, check out the India cricket schedule, Cricket live score . Like us on Facebook or follow us on Twitter for more sports updates. You can also download the NDTV Cricket app for Android or iOS.