While Manchester United defeated Sunderland 3-0, Everton moved past Leicester City 4-2 in the Premier League on Sunday. 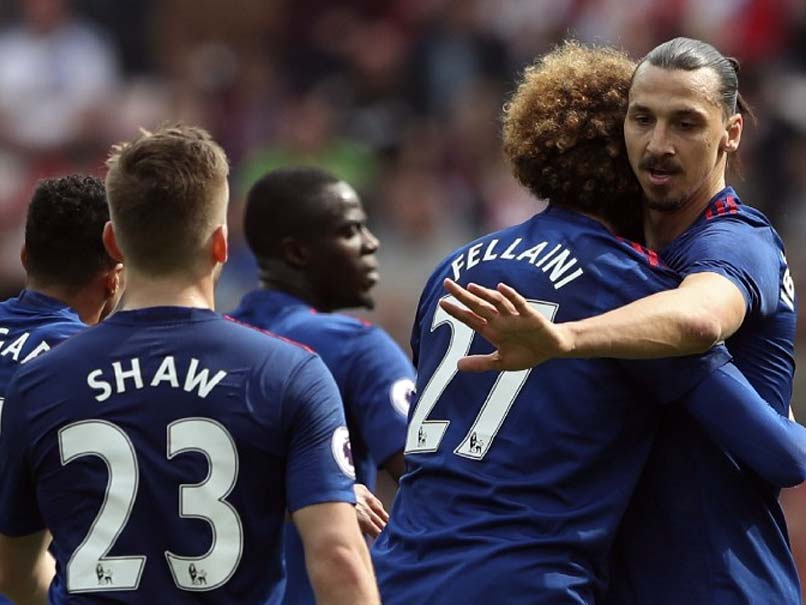 Manchester United earned a 3-0 victory over Sunderland in the Premier League on Sunday.© AFP

Evergreen Manchester United striker Zlatan Ibrahimovic likened himself to film character Benjamin Button after inspiring his team to a 3-0 victory at Premier League basement club Sunderland on Sunday. Ibrahimovic, 35, opened the scoring with his 28th goal of the season and after Seb Larsson had been sent off for Sunderland, goals from Henrikh Mkhitaryan and Marcus Rashford completed victory. "I feel like Benjamin Button. I was born old and will die young," Ibrahimovic said, citing the 2008 Brad Pitt film about a man who ages in reverse.

In the day's other game, league top scorer Romelu Lukaku took his tally to 23 goals with a brace as Everton ended Leicester City's six-game winning run with an entertaining 4-2 victory.

United extended their unbeaten record to 21 league games and climbed to fifth place in the table, four points below fourth-place Manchester City, who have played a game more.

"The result was good," said United manager Jose Mourinho, whose side will return to sixth place if Arsenal win at Crystal Palace on Monday.

"We resisted the results of yesterday when Manchester City and Liverpool won. They left us in a position of 'yes or no?' It was 'yes'."

United were without goalkeeper David de Gea due to a minor hip injury, with Sergio Romero deputising, but Mourinho expects the Spaniard to be fit for the visit of leaders Chelsea next Sunday.

Ibrahimovic broke the deadlock on the half-hour at the Stadium of Light, fending off Billy Jones and whipping a low shot past Jordan Pickford from 20 yards for his 18th goal of the league campaign.

Sunderland then lost Larsson to a furiously contested straight red card after referee Craig Pawson decided the Swede's challenge on Ander Herrera had been unduly reckless.

The hosts' hopes of a comeback evaporated within 46 seconds of kick-off in the second half as Luke Shaw fed Mkhitaryan to drill a low, angled shot beyond Pickford's dive.

Substitute Rashford completed the scoring late on, exchanging passes with Ibrahimovic and arrowing a low drive into the bottom-left corner.

United play Anderlecht in Brussels on Thursday in the first leg of their Europa League quarter-final.

Sunderland have lost six and drawn one of their last seven games and now lie 10 points adrift of safety, relegation to the Championship looming closer with each passing week.

"Manchester United were playing well, but the red card was a decision that went against us.

"We keep going. We have another home game next Saturday (against West Ham United) and we have to try and win it."

Home-grown 18-year-old midfielder Tom Davies put Everton ahead after only 31 seconds following a dart into the box by Kevin Mirallas.

Demarai Gray released Islam Slimani to level in the fourth minute and six minutes later, Marc Albrighton's free-kick from wide on the left embarrassed Joel Robles to put Leicester ahead.

But Lukaku equalised in the 23rd minute, heading in an exquisite cross by Ross Barkley, and after Phil Jagielka had headed in from a corner, Lukaku smashed in his second with over half an hour to play.

Leicester, who visit Atletico Madrid on Wednesday in the first leg of their Champions League quarter-final, remain 11th.

Comments
Topics mentioned in this article
Manchester United Sunderland Leicester City Everton English Premier League Zlatan Ibrahimovic Football
Get the latest updates on India vs South Africa and check out  Schedule, Results and Live Score. Like us on Facebook or follow us on Twitter for more sports updates. You can also download the NDTV Cricket app for Android or iOS.