Bruno Fernandes scored twice as Manchester United romped to a 4-0 victory over Real Sociedad in their Europa League last-32 first leg on Thursday, while Gareth Bale impressed for Tottenham in a 4-1 thrashing of Austrian side Wolfsberg. 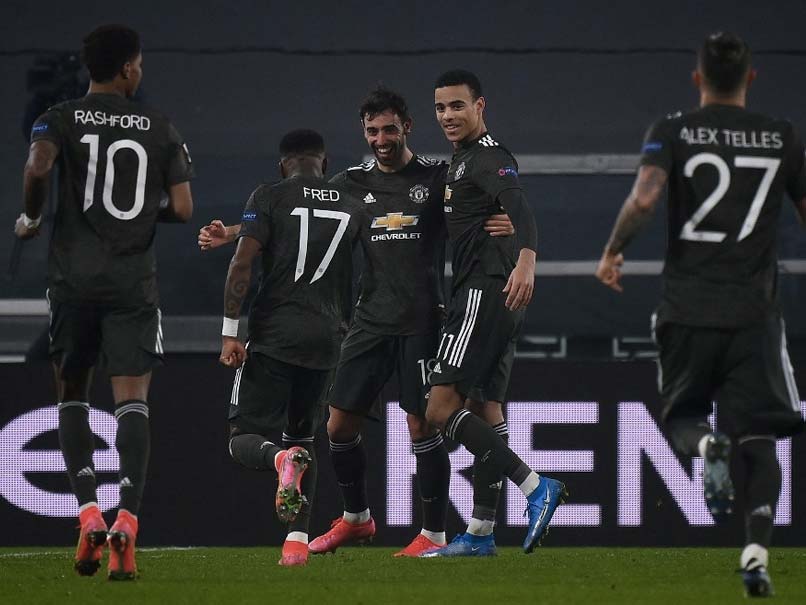 Bruno Fernandes scored twice as Manchester United romped to a 4-0 victory over Real Sociedad in their Europa League last-32 first leg on Thursday, while Gareth Bale impressed for Tottenham in a 4-1 thrashing of Austrian side Wolfsberg. Ole Gunnar Solskjaer's United are all but into the last 16, with four 'away' goals to take into the return game in a week's time, after the first leg was played in Turin due to coronavirus travel restrictions. "We know 4-0 is a good result but we have to be aware of what they can do," Fernandes told BT Sport. "My target is to score the most goals I can, that is my position. The only target is to win trophies."

The Premier League outfit grabbed the lead in the 27th minute when Fernandes pounced on a defensive mix-up to slot in from Marcus Rashford's clipped pass.

Solskjaer's men doubled their advantage 12 minutes into the second period as Fernandes stroked home his 21st goal of the season.

The effort was initially ruled out for offside before the linesman's decision was overruled by VAR.

United continued to play at a pace Sociedad could not deal with and Rashford finally got his goal in the 65th minute following a blistering counter-attack started by goalkeeper Dean Henderson.

The tie was surely put to bed in the final minute of normal time as Daniel James raced clear and fired into the bottom corner.

Bale's agent Jonathan Barnett had said on Wednesday the Wales winger was "towards the end of his career", after Tottenham manager Jose Mourinho had questioned the player's Instagram post suggesting he was in good health despite being unavailable for Spurs' FA Cup defeat at Everton last week.

But Bale notched his first Tottenham assist since April 2013 to tee up Son Heung-min for the opening goal in Budapest against Wolfsberg, before drilling in the second before the half-hour mark.

A wonderful individual strike from Lucas Moura extended Spurs' first-half lead, and although Michael Liendl pulled one back for the Austrians with a second-half penalty, the English club have one foot in the next round after Carlos Vinicius' 88th-minute goal.

"I have a really close relationship with him (Bale)," said Son. "I'm very happy he's getting game time and scored a goal and got an assist. I really enjoy playing with him."

Mourinho has never lost a knockout tie in the competition, which he won with Porto in 2003 and Man United in 2017.

AC Milan, who have not reached the quarter-finals of any European competition since the 2011-12 Champions League, had to settle for a 2-2 draw at Red Star Belgrade.

Milan, who face Inter in a top-of-the-table Serie A derby on Sunday, were pegged back as Milan Pavkov netted a dramatic 93rd-minute leveller for Red Star, who played the closing stages with 10 men.

Arsenal youngster Bukayo Saka continued his excellent season as his sixth goal of the campaign cancelled out Pizzi's penalty in a 1-1 draw against Benfica at the Stadio Olimpico in Rome.

"I feel like I'm improving every game. I'm trying to impress, trying to learn," said Saka. "I just want to keep progressing."

Ligue 1 leaders Lille conceded twice in the final three minutes to lose 2-1 at home to Ajax.

Timothy Weah, son of former Ballon d'Or winner George, put the French team ahead with 18 minutes to play, but Dusan Tadic's penalty and a goal from teenager Brian Brobbey put the Dutch champions on top after the first leg.

"It's good that I scored but I'm not happy because we didn't win," Weah told RMC Sport.

Leicester, sitting third in the Premier League, were held to a goalless draw at Slavia Prague, but there was plenty of excitement elsewhere.

Bayer Leverkusen fought back from three goals down only to lose 4-3 to Young Boys in Bern, while Olympiakos beat PSV Eindhoven 4-2 in Piraeus.

Molde came back from 3-1 down to draw with Hoffenheim, while Edin Dzeko's early goal helped Roma to a 2-0 win at 10-man Braga and Napoli lost 2-0 to Granada.

VfL Wolfsburg Gareth Bale Bruno Fernandes Football
Get the latest updates on IPL Auction 2023 and check out  IPL 2023 and Live Cricket Score. Like us on Facebook or follow us on Twitter for more sports updates. You can also download the NDTV Cricket app for Android or iOS.