Germany were put under immense pressure from a Netherlands side seeking a winner but the visitors snatched victory in the 90th minute through Nico Schulz. 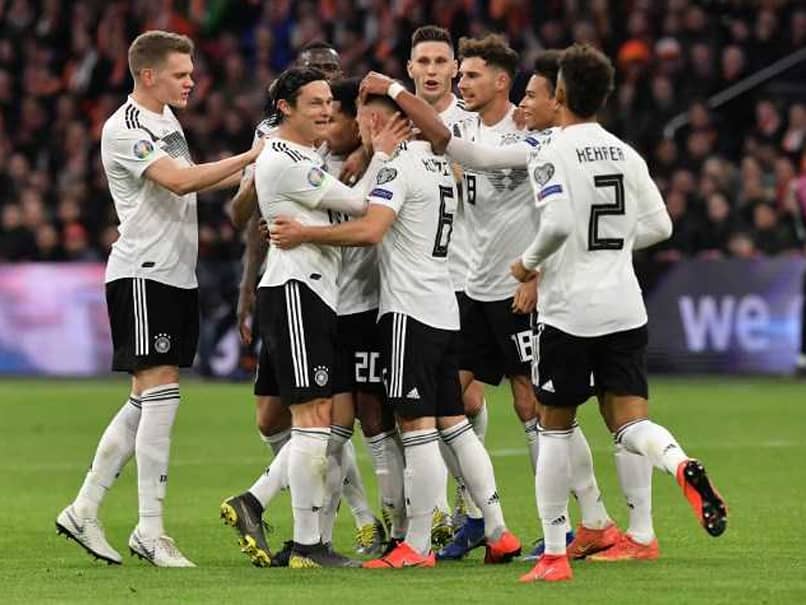 Nico Schulz sealed a thrilling 3-2 win over the Netherlands in a see-saw Euro 2020 qualifier.© AFP

Germany's Nico Schulz sealed a thrilling 3-2 win over the Netherlands in a see-saw Euro 2020 qualifier as Joachim Loew's new-look line-up survived a severe test on Sunday. Elsewhere, World Cup finalists Croatia stumbled to a 1-2 defeat in Hungary, and Eden Hazard celebrated a century of caps with the opening goal in Belgium's 2-0 win over Cyprus. A revamped Germany raced into a 2-0 lead in Amsterdam with thrilling strikes from Leroy Sane and Serge Gnabry but the hosts struck back with a second half header from Matthijs De Ligt before Memphis Depay pounced for an equaliser on 63 minutes.

The four-time world champions were put under immense pressure from a Netherlands side seeking a winner but the visitors, who were booed by their own fans in a 1-1 friendly draw against Serbia last Wednesday, snatched victory in the 90th minute through 25-year-old Schulz.

The Hoffenheim midfielder, who made his international in August, tapped home a loose ball after a tireless Sane had taken the defence with him on a run into the box.

The win comes after Loew took an axe to Germany's squad ahead of the qualifying campaign in the aftermath of last year's calamitous World Cup elimination, when he told Bayern Munich trio Thomas Mueller, Jerome Boateng and Mats Hummels they had no future in the national side.

Bayern stopper Manuel Neuer may also come under pressure for his place after De Ligt beat him with a flying header just after the restart. Neuer, 32, was also slow to react as Depay pounced for the equaliser.

Dutch 'keeper Jasper Cillesen was left with little chance after Gnabry ended his mazy run by outwitting Virgil Van Dijk before sending a rasping long-range effort into the bottom corner in the early action.

Chelsea star Hazard celebrated his 100th cap by scoring the opener in their 2-0 win over Cyprus in Group I with Michy Batshuayi grabbing the second as Real Madrid's Thibaut Courtois went largely untested in the Belgian goal.

Ballon d'Or winner Luka Modric was powerless to stop beaten World Cup finalists Croatia from slipping to a 2-1 defeat to Hungary in Group E on Sunday as Mate Patkai notched a 76th minute winner in Budapest.

Croatia had struggled against Azerbaijan in their opening qualifier last Thursday before escaping with a 2-1 win, but they made the perfect start in the Hungarian capital when Ante Rebic put them ahead on 13 minutes.

But Hungary pulled level through Adam Szalai's fifth goal in as many games and with a quarter of an hour left, 31-year-old Patkai scored his first international goal to pull off a famous victory.

Scotland got back to winning ways with an uninspiring 2-0 win at perennial makeweights San Marino, following an embarrassing defeat at Kazakhstan in their opening qualifier.

"It was a wee bit nervy, it's been a tough few days for everyone," admitted Scotland coach Alex McLeish.

Minnows Israel made it four points from their opening two qualifiers as they swept past Austria 4-2 thanks to a Eran Zahavi hat-trick, setting them up nicely for a tilt at qualification.

Hungary Nico Schulz Eden Hazard Luka Modric Football
Get the latest updates on IPL 2021, IPL Points Table , IPL Schedule 2021 , live score . Like us on Facebook or follow us on Twitter for more sports updates. You can also download the NDTV Cricket app for Android or iOS.