Dominic Calvert-Lewin opened the scoring at Wembley with his 10th goal this season after netting nine times in six games for Everton. 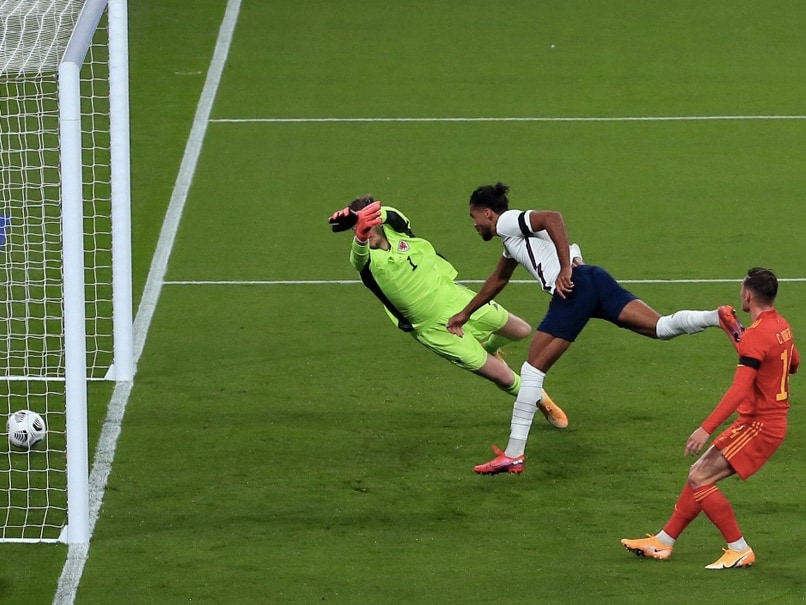 Dominic Calvert-Lewin scored on his England debut as an experimental side beat Wales 3-0.© AFP

Gareth Southgate said Dominic Calvert-Lewin has taken his game to "another level" after the in-form Everton striker scored on his England debut as an experimental side beat Wales 3-0 in Thursday's friendly. Calvert-Lewin opened the scoring at Wembley with his 10th goal this season after netting nine times in six games for Everton. The 23-year-old's first half strike was followed by another maiden England goal as Wolves defender Conor Coady struck after the interval. On his first England start, Southampton striker Danny Ings got the third goal -- his first for his country -- with a fine overhead kick.

Impressed by Calvert-Lewin's rapid rise over the last few months, England boss Southgate said: "Really good, he had excellent presence, his runs are a threat, he presses well and he took his goal well. I thought he could be really pleased.

"He is in really good form. He's an all-round centre forward. I've always liked his general play but it's the goals that are making him another level of player."

With Tammy Abraham, Ben Chilwell and Jadon Sancho missing following their Covid-19 breach and a squad packed with players who have already featured heavily for their clubs, Southgate turned to his understudies before England's Nations League matches against Belgium on Sunday and Denmark on Wednesday.

It was an encouraging display as the least experienced Three Lions team in 44 years, with a total of 54 caps, gave him some food for thought.

Aston Villa playmaker Jack Grealish provided the assist for Calvert-Lewin's goal and was a lively presence in his first England start.

"His work with the ball was very good. We know he draws those fouls, he's comfortable receiving the ball in tight areas and again it was a debut he could be really pleased with," Southgate said.

Arsenal teenager Bukayo Saka lined up at left wing-back and the debutant gradually grew into the game, while Nick Pope replaced error-prone Jordan Pickford in goal and produced a composed display.

"I thought the players did very well. It's so difficult for a new team to come together without much experience," Southgate said.

"It was not fluid at the start but we got more and more into the game, the players saw the tactical problems Wales posed to us when they were pressing and I thought we finished strongly."

Wales, without Gareth Bale and Aaron Ramsey, were beaten for the first time in nine games dating back to June 2019.

They remain without a win over England since 1984, but boss Ryan Giggs had one eye on their Nations League games against the Republic of Ireland and Bulgaria.

It was England's first game at Wembley in 11 months because of the coronavirus pandemic and the sterile behind closed doors atmosphere meant the 'Battle of Britain' felt more like a phoney war at times.

Calvert-Lewin raised the tempo when he got behind the Wales defence and rounded keeper Wayne Hennessey, only to see his shot cleared.

It was a warning that Wales failed to heed and Calvert-Lewin extended his hot streak in the 26th minute.

Grealish cleverly worked a yard of space to loft a fine cross into the six-yard box, where Calvert-Lewin timed his run to evade the flat-footed Chris Mepham and head past Hennessey.

In the absence of the rested Harry Kane, Kieran Trippier was serving as the ninth different England captain under Southgate and the Atletico Madrid defender celebrated the honour by setting up the second goal in the 53rd minute.

Trippier swung his free-kick to the far post and Coady arrived to guide a half-volley past Hennessey from close-range.

Ings put the result beyond doubt in the 63rd minute, meeting Tyrone Mings' header with a superb overhead kick from six yards.

Everton Dominic Calvert-Lewin Danny Ings Football
Get the latest updates on Fifa Worldcup 2022 and check out  Fifa World Cup Schedule, Stats and Live Cricket Score. Like us on Facebook or follow us on Twitter for more sports updates. You can also download the NDTV Cricket app for Android or iOS.