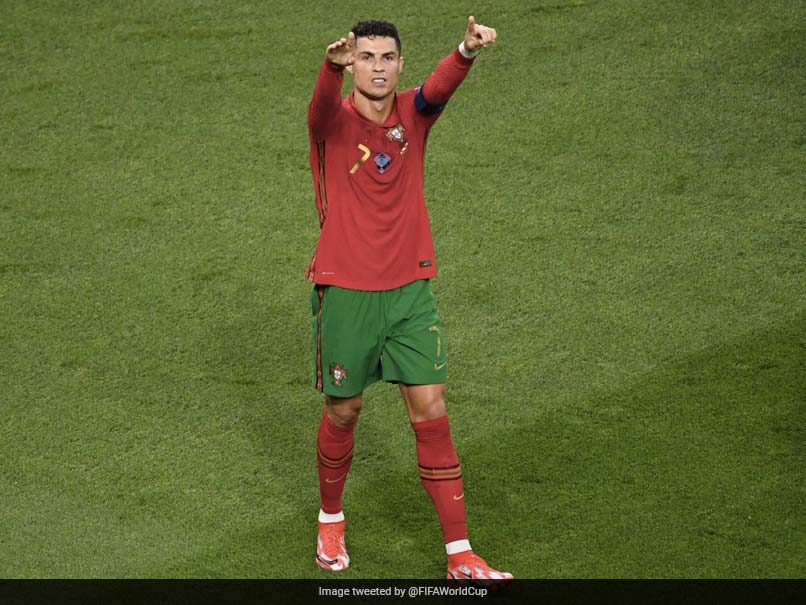 Cristiano Ronaldo broke the all-time international goalscoring record with his 110th Portugal goal and then scored an injury-time winner to salvage his country a dramatic 2-1 World Cup qualifying victory over the Republic of Ireland in Faro on Wednesday. The 36-year-old Ronaldo, whose return to Manchester United from Juventus was confirmed on Tuesday, had missed a penalty in the 15th minute before John Egan gave Ireland a half-time lead. But Ronaldo equalised in the 89th minute with a header, before outjumping the Irish defence again in the sixth minute of added time. He passes Ali Daei, who scored 109 international goals, after equalling the Iranian great's record tally during Euro 2020.

"I'm so happy, not just because I beat the record, but for the special moment that we had," Ronaldo told Sky Sports.

"I have to appreciate what the team did, we believed until the end. I'm so glad."

Portugal sit top of Group A with 10 points from four matches, although Serbia are only three points behind with a game in hand.

The group winners qualify automatically for the finals in Qatar, with the runners-up heading into the play-offs.

Ireland are still only above bottom team Azerbaijan after three defeats, including a humiliating 1-0 home loss to Luxembourg in March.

Luxembourg claimed a second win in World Cup qualifying for the first time in their history in the day's other match, beating the Azeris 2-1.

Ronaldo was gifted the perfect opportunity to take the record on his own early on after Jeff Hendrick was adjudged to have tripped Bruno Fernandes.

The referee was asked by VAR to have a second look on the pitchside monitor, but he stuck with his original decision after a lengthy delay.

But the crowd in the Algarve were stunned, as Ronaldo's well-struck penalty was saved by diving Ireland goalkeeper Gavin Bazunu, a teenager who is on loan at English third-tier side Portsmouth from Manchester City.

The hosts continued to threaten, with Diogo Jota heading against the post just after the half-hour mark.

Stephen Kenny's Irish side grew in confidence, though, and Aaron Connolly was denied by the legs of Portugal goalkeeper Rui Patricio in the 45th minute.

Ireland claimed a shock lead from the resulting corner, as centre-back Egan leapt highest to glance a header into the far corner of the net.

Bazunu almost went from hero to villain in first-half injury time, but managed to gather Jota's volley at the second attempt after initially allowing the ball to squirm out of his grasp.

Portugal started the second half brightly although it was Ireland who almost doubled their lead, as Brighton forward Connolly fired wide under pressure from Joao Palhinha, with his penalty appeals for an apparent nudge in the back waved away.

The Euro 2016 champions predictably piled on the pressure in the final half an hour, with Bernardo Silva inexplicably blazing over from only seven yards out.

Ronaldo saw a free-kick from the edge of the box saved by Bazunu, but he powered a header into the net just seconds later.

James McClean almost grabbed all three points for Ireland as his shot was kept out by Patricio.

But with the allocated five minutes of injury time already played, Ronaldo met Joao Mario's cross with another towering header.

Ronaldo was booked for his celebration and will miss Portugal's next qualifier against Azerbaijan next week through suspension, although it is unlikely he will be overly bothered by that.