On Saturday, Barcelona and Real Madrid go face to face in the biggest football stadium in the world too, but almost all of the 99,000 seats at Camp Nou will be empty. 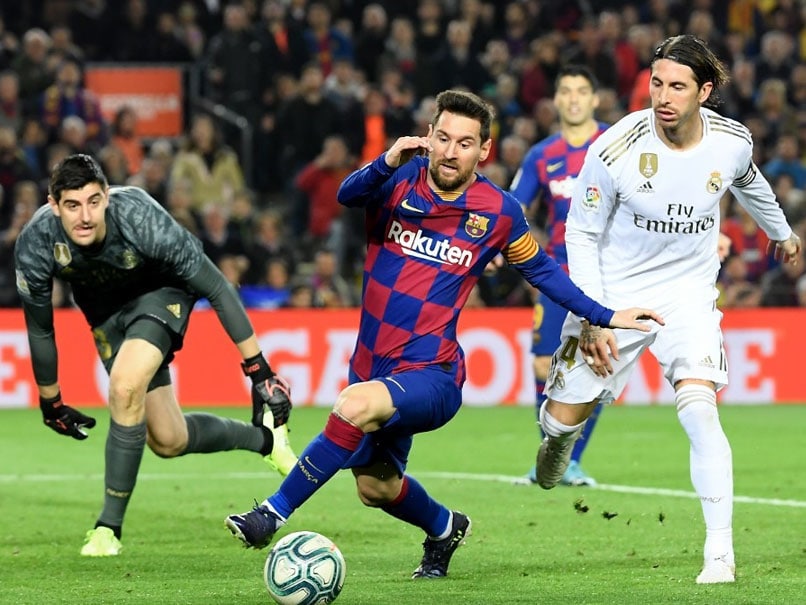 Lionel Messi remains the crown jewels for the Clasico and La Liga.© AFP

"The Clasico is still the Clasico," says La Liga president Javier Tebas. "For the league it's another match but for intrigue and international appeal, it's the two biggest clubs in the world going face to face. It's still the most important club game in the world." On Saturday, Barcelona and Real Madrid go face to face in the biggest football stadium in the world too, but almost all of the 99,000 seats at Camp Nou will be empty. In sporting terms, it would be hard to find a more dramatic event reduced so dramatically, as clear a demonstration as there could be of the effects of the coronavirus pandemic.

"Any football match without fans loses a fundamental part of the game," Tebas says, in an exclusive interview with AFP.

"But we've had more than 300 games played without fans and we've seen the players still provide a spectacle on the pitch. In fact the television numbers prove it. People are still watching."

La Liga usually estimates a potential Clasico audience of 650 million worldwide and predicts greater numbers this weekend, given other sports in many countries remain suspended.

Yet it is those fans that bring emotion and meaning, with their absence perhaps felt even more keenly at a time when the allure of these teams on the pitch is not what it once was.

The decline began before the crisis but it has also been exacerbated by it.

The transfer window was an exercise in cutting costs as Madrid went without a single new signing for the first time in 40 years and although Barca bought, they were more desperate to sell, allowing Luis Suarez to join title rivals Atletico Madrid.

"They showed good judgement," says Tebas. "With the lack of income it would be crazy if they were buying at the same level as before."

Lionel Messi remains the crown jewels for the Clasico and La Liga, and it was no surprise when the Spanish league sided with Barcelona in the dispute over his contract in August.

"We've been lucky to enjoy him for so many years but Messi should think very carefully about what he does next," Tebas says.

"If Messi left Barcelona, that reputation he has now and that has worked so well for him would be very damaged.

"It's true he could get a better offer financially but the reputation he has after more than 20 years, I think he has to hold onto that."

If Messi leaves next summer when his contract expires, it will most likely be to Manchester City and the Premier League, another boost for La Liga's rival that has been seemingly immune to the pandemic.

"It wouldn't be a drama," says Tebas. "Cristiano Ronaldo left, Neymar left. Neymar went to PSG and I haven't seen the French league reaching a super level because of him.

"That's the reality. People who think the players are the ones who define a competition are wrong and I'm glad they think that way because they won't grow."

But there is concern about the might of the Premier League, whose spending reached 1.4 billion euros in the summer, dwarfing the 412 million spent by clubs in La Liga.

"I was surprised," says Tebas. "Given the current economic climate it seemed excessive."

Liverpool and Manchester United were also reported on Tuesday to be leading discussions over a new European Premier League, which would involve 18 of the continent's biggest clubs playing each other.

"It's the perfect project to lose money," says Tebas. "Do you know how many people in Spain watched Dinamo Kiev against Juventus? Less than 50,000.

"More than 50,000 watch our second division games. A match between Barca and Eibar will get 1 million.

"The national feeling for football is hugely important, and what happens in that league of stars when someone is 10th or 15th? If Real Madrid are 10th, let's see then who goes to the Bernabeu.

"There are many television companies who tell me they wouldn't put one euro into that project because the audiences would drop. It's an idea for dreamers, all theories, no reality."

The more immediate challenge for Tebas is to keep La Liga float, as coronavirus infections continue to rise across Spain.

'Difficult to have fans'

For the first time since March, limited numbers of Spanish fans returned last weekend to some lower division games, where protocol depends on local health authorities rather than central government.

But a return in the top two tiers is not close. "Until there is a vaccine I think it will be very difficult to have fans in stadiums," said Tebas.

"And in the short-term it is not a priority. The priority is the competition continues. We don't think we should put too much pressure on the government."

Yet there will be pressure from La Liga clubs, who Tebas estimates lost 600 million euros last season and will lose another billion euros if this season ends without fans.

And there is no back-up plan for another suspension. "There are no spare dates," Tebas said. "We have to assume there won't be another stoppage."