Both teams left the pitch after a touchline argument erupted when the Romanian fourth official, Sebastian Coltescu, appeared to describe Basaksehir assistant coach Pierre Webo, as "black", or "negru" in Romanian. 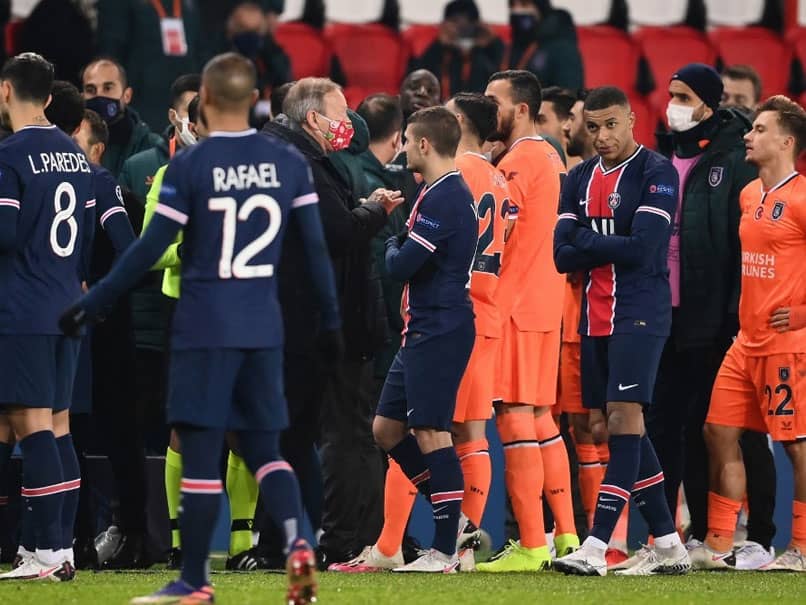 The group game in Paris, which was goalless at the time, was suspended and will resume on Wednesday.© AFP

The unprecedented walkout of Paris Saint-Germain and Istanbul Basaksehir players over an alleged racist comment by a Champions League official sparked a new row about racism in football on Wednesday. Both teams left the pitch on Tuesday after a touchline argument erupted when the Romanian fourth official, Sebastian Coltescu, appeared to describe Basaksehir assistant coach Pierre Webo, a former Cameroon international player, as "black", or "negru" in Romanian. The group game in Paris, which was goalless at the time, was suspended and will resume on Wednesday where it left off, in the 14th minute, with a different set of officials. PSG forward Kylian Mbappe tweeted "Say no to racism", while teammate Neymar posted "Black Lives Matter". Both players were prominent in the heated discussions on the touchline.

Turkey's President Recep Tayyip Erdogan, who is understood to be close to Basaksehir's owners, tweeted that he "strongly condemns the racist remarks", while France's sports minister Roxana Maracineanu, who was born in Romania, praised the players' "historic decision".

Basaksehir midfielder Giuliano told Brazilian media: "(The comment) was very clear, many people heard, including our coach. It was disgraceful. As a team and a group, we decided to protest because that is unacceptable. Racism has to end."

The row flared after Webo was shown a red card. Television microphones in the empty Parc des Princes stadium -- matches are taking place without spectators because of Covid-19 restrictions -- then picked up a furious Webo repeatedly asking why a racist term had been used to describe him.

In the exchange in question between the all-Romanian officiating team, Coltescu said: "The black one over there. This is not possible. Go and identify him. That guy, the black one."

Basaksehir's Senegalese forward Demba Ba, among the substitutes for the away side, could be heard remonstrating with the official in English, saying: "When you mention a white guy, you never say 'this white guy', you just say 'this guy', so why when you mention a black guy do you say 'this black guy?'"

The French government's spokesman Gabriel Attal condemned all racism in sport and commended the "solidarity" shown by both teams.

Rio Ferdinand, the former Manchester United and England defender and now a TV pundit, said on BT Sport: "I think we are at a disturbing tipping point. Not a week goes by without an incident involving race. The players walking off is a step in the right direction, but it can't just be left to them."

Ferdinand's brother Anton was involved in a high-profile incident in 2012, when Chelsea player John Terry was accused of racially abusing him during a match in England.

Many athletes have taken a strong stand against racism since Black Lives Matter protests flared around the world over the death of George Floyd during his arrest in Minneapolis in May.

Danny Makkelie of the Netherlands was named as the referee for the remainder of the game. The other officials will be Dutch and Polish. They replace Romanian referee Ovidiu Hategan, his two assistants and Coltescu.

The president of the Turkish champions said his side refused to restart the game as long as the fourth official was still involved.

Basaksehir responded to the incidents by tweeting "NO TO RACISM #Respect", along with a photo of UEFA's anti-racism logo.

The message was retweeted by PSG.

"All forms of racism go against the values held by Paris Saint-Germain, the club's chairman, staff and players," the French champions said.

Regardless of the result of the match, PSG have qualified for the last 16 from Group H after RB Leipzig beat Manchester United 3-2 in Germany.

However, PSG will need to win the game in order to finish top of the group above the German team.

RB Leipzig
Get the latest updates on India vs England Series, India vs England , live score and IPL 2021 Auction . Like us on Facebook or follow us on Twitter for more sports updates. You can also download the NDTV Cricket app for Android or iOS.