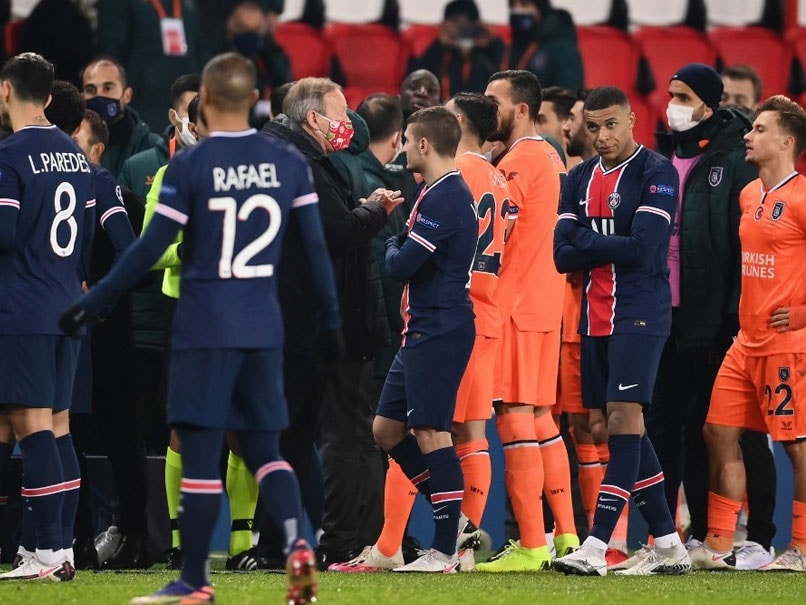 Paris Saint-Germain's Champions League game with Istanbul Basaksehir was suspended on Tuesday and will be completed a day late after both sets of players walked off in protest amid allegations of racism by one of the match officials, in an unprecedented incident in European football's elite club competition. The row erupted after Basaksehir assistant coach Pierre Webo, the former Cameroon international, was shown a red card during a fierce row on the touchline with staff from the Turkish club accusing the fourth official, Sebastian Coltescu, of using a racist term.

That led to the game at the Parc des Princes -- which started at 9:00 pm local time (2000 GMT) - stopping in the 14th minute while still goalless, with the players walking off around 10 minutes later.

In a statement late on Tuesday UEFA promised to open a "thorough investigation" into the incidents and confirmed the match would restart at 1755 GMT on Wednesday from where it stopped.

European football's governing body said it had "decided on an exceptional basis to have the remaining minutes of the match played (Wednesday) with a new team of match officials."

UEFA's regulations for the Champions Leaguestipulate that, normally, any team refusing to play must forfeit the game and also faces a fine of 250,000 euros ($303,000).

Danny Makkelie of the Netherlands was named as the referee to take over the remainder of the game, with the rest of his team of officials from the Netherlands and Poland.

Television microphones picked up a furious Webo repeatedly asking why a racist term had been used to describe him.

The referee, Ovidiu Hategan, his two assistants and fourth official Coltescu were all from Romania.

In the exchange in question, heard on television and translated by an AFP journalist, Coltescu said: "The black one over there. This is not possible. Go and identify him. That guy, the black one."

Basaksehir's Senegal international striker Demba Ba, among the substitutes for the away side, could be clearly heard on television remonstrating with the official, saying in English: "When you mention a white guy, you never say 'this white guy', you just say 'this guy', so why when you mention a black guy do you say 'this black guy?'"

The incident sparked a reaction from Turkey's President, Recep Tayyip Erdogan, who is understood to be closely linked to the owners of the club.

He tweeted to say: "I strongly condemn the racist remarks made to Pierre Webo, member of the Basaksehir technical staff, and am convinced UEFA will take the necessary measures".

Meanwhile, the president of the Turkish champions said his side refused to restart the game as long as the fourth official was still involved.

Basaksehir responded to the incidents by tweeting "NO TO RACISM #Respect", along with a photo of UEFA's anti-racism logo.

The message was retweeted by PSG, who themselves later tweeted their support on their English-language feed.

"All forms of racism go against the values held by Paris Saint-Germain, the club's Chairman, staff and players," the French champions said.

Despite the interruption of the match, being played behind closed doors because of the coronavirus pandemic, PSG qualified for the last 16from Group H after RB Leipzig beat Manchester United 3-2 in Germany.

However, PSG will need to win the game in order to finish on top of the group above Leipzig and thereby secure a potentially easier draw in the next round.

Basaksehir, who are competing in the Champions League group stage for the first time, are already eliminated and will finish bottom.