RB Leipzig's impressive debut in the knock-out stages ended Tuesday in Lisbon with a 3-0 defeat at the hands of Paris Saint-Germain. 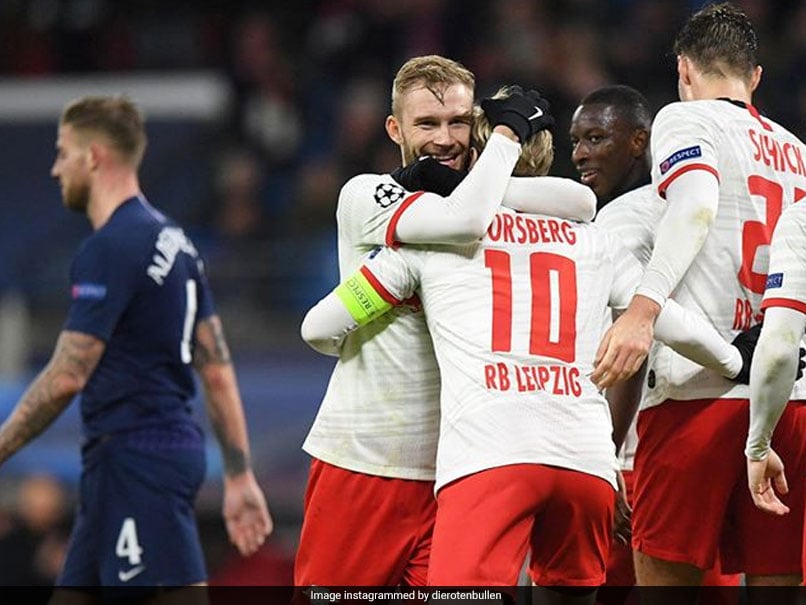 Reaching the Champions League semi-finals means RB Leipzig have achieved their ambition to become a top European club, yet pockets of resistance still remain in Germany to the Red Bull-backed club. "Those who are anti-Leipzig can breathe easy," Berlin daily Tagesspiegel insisted Wednesday. "The defeat of RB Leipzig is a victory for football's folklore." Leipzig's impressive debut in the knock-out stages ended Tuesday in Lisbon with a 3-0 defeat by Qatari-backed Paris Saint-Germain and two goals created by their Brazil star Neymar, the world's most expensive player.

Under Julian Nagelsmann, at 33 the youngest head coach to reach the Champions League's semi-finals, Leipzig have now joined the elite of European football.

Yet so incensed is German football magazine 11Freunde by the rise that they refuse to cover them because "we don't want to normalise the construction that is RB Leipzig".

However, their undeniable success means the numbers of those among Germany's established clubs who resent RB Leipzig's naked commercialism are dwindling.

Critics like Borussia Dortmund chief executive Hans-Joachim Watzke, who once insisted RB Leipzig "only plays football to sell cans" are becoming the minority.

There are no longer such angry protests, like in 2016/17 when home fans, especially in Dortmund, Cologne and Borussia Moenchengladbach, objected whenever Leipzig played away in their debut Bundesliga season.

After all, RB Leipzig's commercialism is nothing new in Bundesliga football.

Bayern Munich are backed by mighty sponsors Adidas, Audi and Allianz, while Borussia Dortmund are the only Bundesliga club floated on the stock market.

Schalke are sponsored by Russian gas supplier Gazprom, while Hoffenheim are backed by billionaire Dietmar Hopp, a hate figure among some German fan groups.

Wolfsburg and Leverkusen have long been the respective factory teams of car manufacturer Volkswagen and pharmaceutical company Bayer.

It's hypocritical to see RB Leipzig as the great enemy of football, argues Berlin paper Tagesspiegel.

"Those who think like that live in their own little world. Not in the reality of football," wrote the paper.

"Leipzig was defeated on Tuesday by PSG, whose squad is worth almost a billion euros, 400 million of which went to Neymar and (Kylian) Mbappe alone."

Red Bull's presence was also felt off the field in Lisbon with 1,400 posters of RB Leipzig players plastered around the capital, each bearing the logo of the energy drink brand.

Leipzig's bosses point to the success they have earned in less than a decade, enough to draw glances of envy from their German league rivals with longer histories.

"We aren't sad that we don't have a 100-year-old tradition. We are looking further ahead," said Leipzig chief executive Oliver Mintzlaff.

"We are proud of our values, we are a young club, we are new and it has to be allowed that sometimes there are new things."

Having finished in the top six in each of their four seasons in the Bundesliga, Leipzig success is now a fact in Germany's top flight.

The club will not release concrete figures on the investments made by Red Bull founder Dietrich Mateschitz.

Regional paper Mitteldeutsche Zeitung once estimated Red Bull has spent around 500 million euros ($596 million) on the squad, stadium, training facilities and running of the club.

Having reached the pinnacle of European football, the challenge is now to regularly repeat the feat.

"Developing at the same rate as in the last 11 years will be an enormous challenge," admitted Nagelsmann.

However, Mintzlaff is clear the desire for future success will not come at any price.

"We're going to continue to develop within the framework we had before the 'Final 8' (in Lisbon)."

Borussia Dortmund Football
Get the latest updates on India vs South Africa and check out  Schedule, Results and Live Score. Like us on Facebook or follow us on Twitter for more sports updates. You can also download the NDTV Cricket app for Android or iOS.