Tottenham Hotspur have just one point after three matches in Group B. 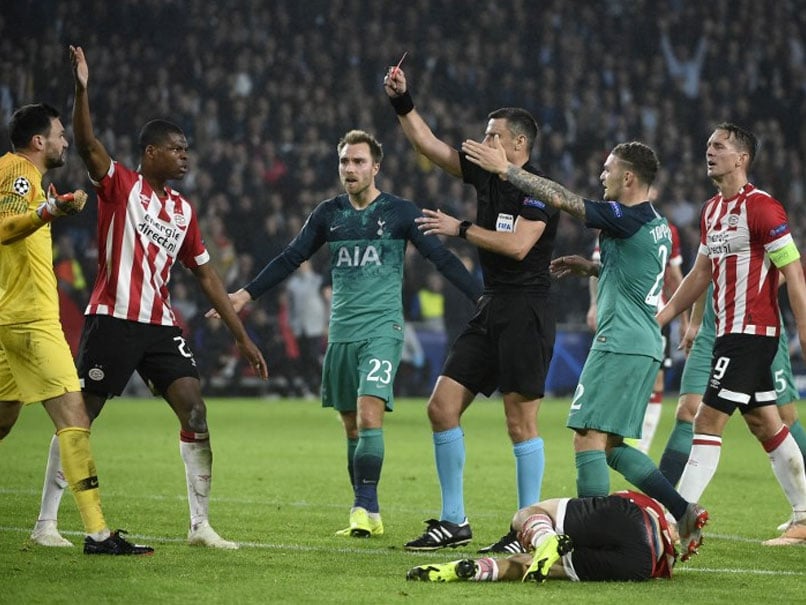 Mauricio Pochettino conceded Tottenham Hotspur will need little short of a miracle to get past the group stage after the Premier League team's Champions League hopes were dented by a 2-2 draw away to PSV Eindhoven on Wednesday. With no points from their opening two Group B fixtures, this was make-or-break for both Spurs and PSV at the Philips Stadion. A dominant Spurs looked to have the points wrapped up after England striker Harry Kane nodded past Jeroen Zoet to give the visitors a 55th-minute lead having seen Lucas Moura level Hirving Lozano's 30th-minute opener for PSV minutes before the interval.

But when Lozano threatened to catch a through ball in the 78th minute, Spurs 'keeper Hugo Lloris came rushing out of his goal and caught the Mexican winger with his knee.

Vorm's first task was to push away a superb free-kick at the base of the post, only to be caught ball-watching when De Jong poked a loose ball past him with three minutes left on the clock.

It saw Spurs locked with PSV on one point in Group B.

"In the end (it was) a draw and (it leaves us) with the minimum possibility to go to the next stage of the Champions League," Pochettino told BT Sport.

"We'll see what happens now with Barcelona and Inter Milan. One point after three games -- it will be so difficult.

"If you score more goals, at the end you're going to win the game. That's why we're so disappointed. It's a game that you must win."

A fast start saw Tottenham quickly take control and in the 18th minute Kane saw a great header come off post and crossbar following a corner from the right.

Yet the Londoners were stunned on the half hour when Toby Alderweireld panicked on a backpass from Davinson Sanchez as Lozano applied the pressure.

Despite Alderweireld running back to block, Lozano's effort deflected off the Belgian's boot to send the ball over a rooted Lloris.

Tottenham looked to be back on level terms minutes later when, from a corner, Sanchez fired a rebound from Alderweireld's header past Zoet from inside a packed area.

But somehow the goal was ruled offside. Although Kane was in an offside position, the England striker made no attempt to play the ball.

Spurs made amends almost immediately, Christian Eriksen splitting the PSV defence to set up Kieran Trippier for a crisp cross that Lucas fired first-time past Zoet via a deflection.

Tottenham were thankful moments later when Pereiro dribbled past Alderweireld to prod an effort off Lloris's bar.

But Spurs continued to be the better team.

Zoet came to the rescue to deny Eriksen after he was set up by Trippier and the Dane made amends soon after with a superb delivery that saw Kane nod past Zoet at the back post.

Despite Spurs' dominance, the depleted Londoners were made to pay in the final minutes when De Jong pounced in a packed area to poke past Vorm.

Hugo Lloris PSV Eindhoven vs Tottenham Hotspur, B Football
Get the latest updates on ICC T20 Worldcup 2022 and CWG 2022 check out the Schedule, Live Score and Medals Tally. Like us on Facebook or follow us on Twitter for more sports updates. You can also download the NDTV Cricket app for Android or iOS.