Kylian Mbappe ripped Barcelona apart on Tuesday by scoring a stunning hat-trick in a 4-1 rout to put Paris Saint-Germain on the brink of the Champions League quarter-finals. 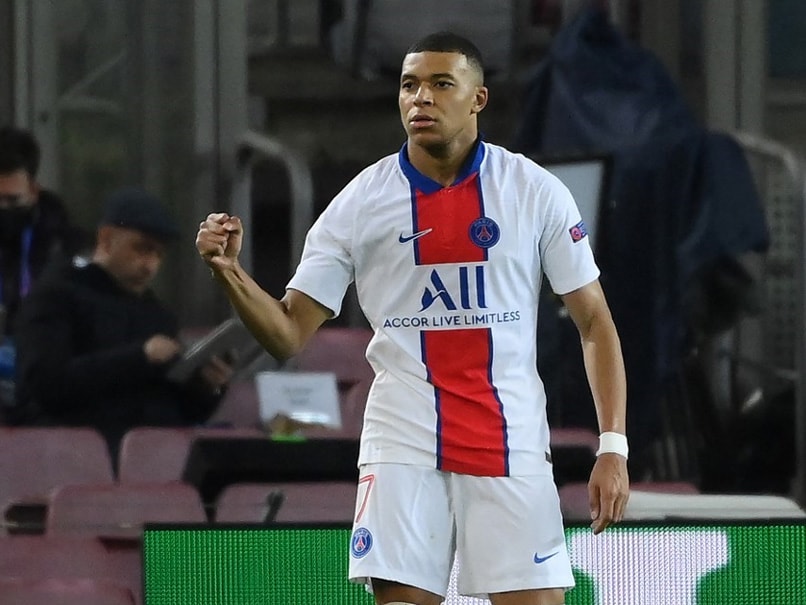 Kylian Mbapperipped Barcelona apart on Tuesday by scoring a stunning hat-trick in a 4-1 rout to put Paris Saint-Germain on the brink of the Champions League quarter-finals. Mbappe underlined his status as the rising superstar of world football with a ruthless display of finishing at Camp Nou that will go down as one this competition's most devastating individual performances. The 22-year-old eclipsed Barca's Lionel Messi, whose opening goal from the penalty spot had been reduced to nothing more than a footnote by the final whistle.

Moise Kean also headed in midway through the second half, carelessly left unmarked from a free-kick as PSG pulled away to win this first leg, and perhaps the tie.

Barcelona will no doubt draw upon the spirit of their astonishing 'Remontada' in 2017, when they won the second leg 6-1 to overturn a 4-0 deficit from the opening game in Paris.

It will certainly serve as a warning for PSG but without fans, and with Mbappe, any hopes of a repeat for Ronald Koeman's side from look faint at best.

"The great footballers write their stories in the biggest matches," said Mauricio Pochettino. "We had no doubts before the game and even less now that we are seeing a top, top player."

Koeman had gambled on the fitness of Gerard Pique, who had not played a game in almost three months due to a knee ligament injury. But to rub salt into the wounds, Pique trudged off late on just as PSG were running riot.

This was a chastening experience for Koeman's youthful side, who had shown signs of a resurgence in recent weeks in La Liga but were exposed against an opponent of an altogether different class.

Koeman was even asked if he wanted to continue as coach but was defiant.

"I accept a defeat and go to work. If I was a person who was very happy when we win and then with a result like today said I have no desire to continue, that would be crazy.

"I know where we are, we have to change, we are not at the end of this road, we are halfway through."

Even without the injured Neymar and Angel Di Maria, PSG were too strong, a breathless, entertaining first half giving way to a French obliteration in the second.

PSG's new boss Pochettino pumped a fist at the end, after a huge early boost to his credibility.

The warning signs for the hosts came early as Mbappe sped in behind their central defence after 52 seconds, only for Marc-Andre ter Stegen to clear just in time.

For half an hour, the chances just kept coming, at both ends. Antoine Griezmann scuttled through but was denied by Keylor Navas at the near post and then Pedri made up for a miscontrol by dashing back to prevent Mauro Icardi's finish from trickling in.

Messi's pass led to Barca's opener, a clipped ball over the top attracting the gaze of Layvin Kurzawa as he tracked back and inadvertently tripped Frenkie de Jong in front of him. Messi slammed the penalty into the top corner.

PSG were briefly shell-shocked and for the next five minutes, Koeman's men chased a second, with Messi freeing Ousmane Dembele in the area but he failed to connect.

Yet as they gained in confidence, they also left gaps and PSG hit back. Mbappe had already seen a flicked finish blocked by Pique and moments later he made sure, taming Marco Verratti's astute pull-back with one touch before feathering another expertly around Clement Lenglet in the six-yard box and unleashing past Ter Stegen.

Now the Parisians were on top, with Kurzawa thwarted by Ter Stegen's fingertips and Barca relieved to reach half-time.

But Mbappe was relentless, motoring past opponents every time he got the ball and never letting up. Ter Stegen had to save a deflected shot from Kean before PSG took charge with two goals in five minutes.

Pique could only hack away Alessandro Florenzi's cross to the feet of Mbappe, who clipped in his second, and then Kean headed home, left free at the back post by Lenglet.

Navas almost gifted Barcelona a lifeline when his clearance met Griezmann's left foot and the ball drifted just wide of his own post.

Instead, Mbappe landed the knock-out blow, teed up on the counter-attack and curling beautifully in the far corner.

Barcelona Football Kylian Mbappe
Get the latest updates on ICC T20 Worldcup 2022 and CWG 2022 check out the Schedule, Live Score and Medals Tally. Like us on Facebook or follow us on Twitter for more sports updates. You can also download the NDTV Cricket app for Android or iOS.