Porto hosted Juventus, the beaten 2015 finalists, looking for their first win in four meetings between the sides -- and confident in their chances after a recent six-game winning run. 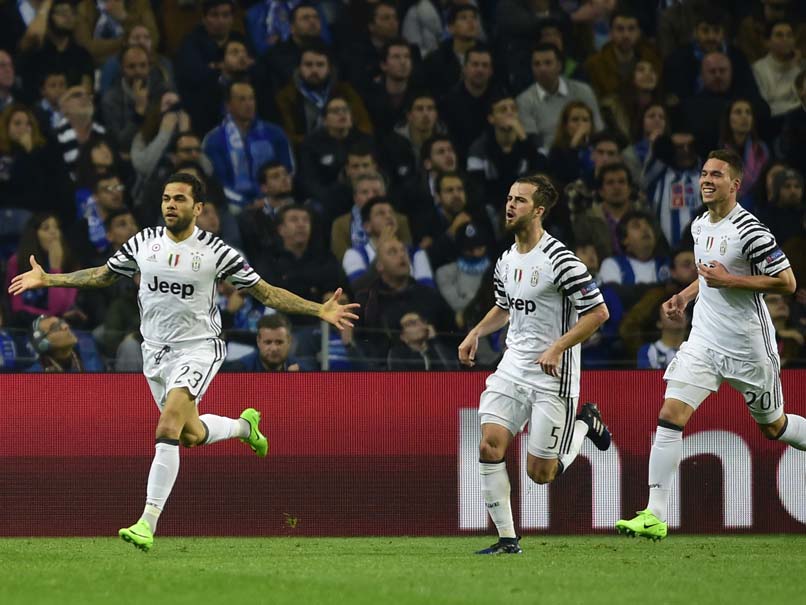 Dani Alves and Marko Pjaca came off the bench to strike for Juventus.© AFP

Porto hosted Juventus, the beaten 2015 finalists, looking for their first win in four meetings between the sides -- and confident in their chances after a recent six-game winning run.

But the hosts endured a disastrous opening half at the Estadio do Dragao, former Inter Milan midfielder Alex Telles sent off for a second bookable offence in the 27th minute.

The 21-year-old capitalised only six minutes later, starting a great move before firing past Casillas from 15 yards out.

Allegri replaced right-back Stephan Lichtsteiner with Alves immediately afterwards and the former Barcelona star scored with practically his first touch of the game to wrap up a precious win for the Turin giants.

Deploying an attack-minded 4-2-3-1 formation designed to squeeze goals out of Higuain, Juve were forced to defend deep as Porto took control in the opening stages.

Juve eventually settled and Higuain looked on his way to breaking the deadlock on 18 minutes until Marcano slid in to dispossess the Argentine yards from goal.

When Miralem Pjanic fired an enticing ball into the area for Mandzukic, Casillas was out quickly to sweep the ball away with his feet.

Telles earned his first caution on 25 minutes for a foul on Cuadrado and saw red barely two minutes later for a foul on Lichtsteiner.

Santo replaced Silva with Miguel Layun three minutes later but it took a superb reflex save from Casillas to stop Higuain's deflected effort from squeezing in at the base of the post on 39 minutes.

Casillas was beaten on the stroke of half-time but Dybala's shot from the edge of the area came off the base of the 'keeper's upright.

The players left the pitch at half-time to a chorus of whistles, although they were aimed mostly at German referee Felix Brych after a controversial opening period capped by Maxi Pereira being cautioned for a foul on Mandzukic.

A reminder that Porto had no intention of sitting back to defend came just three minutes after the restart, Hector Herrera heading Layun's great cross to the back post into Buffon's side-netting.

Khedira came close after pouncing on a poor headed clearance by Ruben Neves and then Higuain bamboozled his two markers before unleashing a right-footed drive that curled just wide of Casillas's far post.

Allegri was looking increasingly frustrated and replaced the ineffective Cuadrado with Pjaca on 67 minutes.

The Croat seized the day minutes later, winning possession from a Marcano blunder inside the area to beat Casillas with his maiden Juventus goal.

Alves capped a forgettable night for the hosts when he chested down Alex Sandro's delivery to fire off an angled shot that beat Casillas at his far post on 74 minutes.

Goals from Pablo Sarabia and Joaquin Correa had given Sevilla a deserved 2-0 lead, whilst Correa also saw a penalty saved by the inspired Kasper Schmeichel.

However, despite Sevilla's dominance, Schmeichel's heroics and Vardy's strike means the English champions are well in the tie ahead of the second leg at home on March 14.

The two sides couldn't be in more contrasting form with Sevilla just three points off the top of La Liga, whilst Leicester face a relegation battle just a year after defying all the odds to win the Premier League.

Comments
Topics mentioned in this article
Juventus Leicester City Football FC Porto Sevilla
Get the latest updates on IPL Auction 2023 and check out  IPL 2023 and Live Cricket Score. Like us on Facebook or follow us on Twitter for more sports updates. You can also download the NDTV Cricket app for Android or iOS.