Moenchengladbach ended their six-year wait to beat Borussia Dortmund when their 4-2 home win on Friday lifted them to fourth in the Bundesliga table. 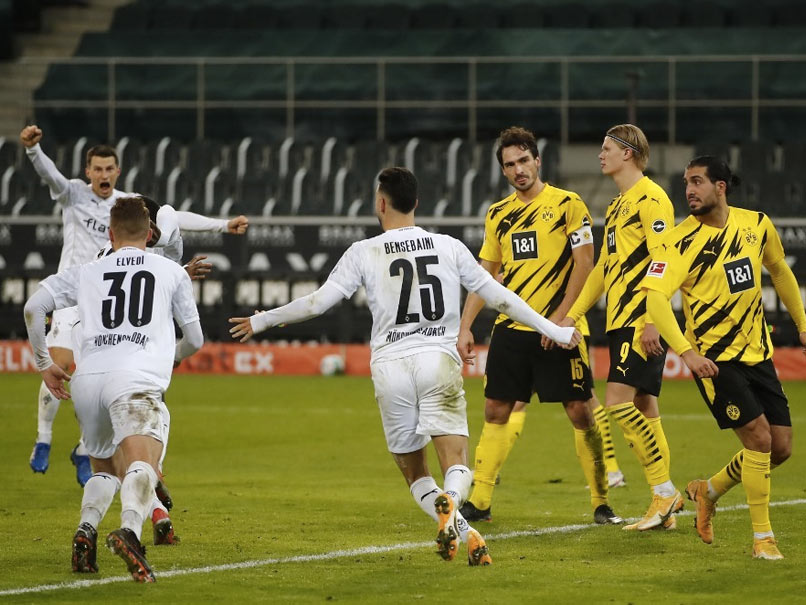 Defender Nico Elvedi netted twice as Moenchengladbach ended their six-year wait to beat Dortmund when their 4-2 home win on Friday lifted the Foals to fourth in the Bundesliga table. Two goals by Dortmund striker Erling Braut Haaland were bookended by Elvedi netting from set-pieces in the action-packed opening 32 minutes. Algeria left-back Ramy Bensebaini restored Gladbach's lead early in the second half before substitute Marcus Thuram headed the hosts' fourth. Dortmund are now fifth - out of the Champions League places - after failing to win any of their last three games since their impressive 3-1 win at RB Leipzig in early January.

"If we don't stop that, it will be difficult to win a game.

"It stinks, big time," Reus fumed having hurled his boots away in frustration after being substituted with 19 minutes to go.

In the other direction, Gladbach are fourth having taken 13 points from a possible 15 in 2021.

They are eight points behind leaders Bayern Munich, who are at bottom side Schalke on Sunday.

It was also a significant win for their coach Marco Rose, who the German media are tipping to replace caretaker boss Edin Terzic at Dortmund next season.

"We went 3-2 up at just the right moment and then defended well, so we're very happy," said Rose.

After 12 straight defeats to Dortmund, Gladbach earned their first win over the Black-and-Yellows since April 2016. "We're finally ended the run of defeats," Rose added.

Breel Embolo came on for Gladbach in the second-half despite police claims, which the Swiss striker denies, that he attended a party in Essen last Saturday that broke Germany's lockdown rules.

Dortmund made a lethargic start at Borussia Park and a Gladbach goal after 44 seconds was ruled out by the VAR.

However, the hosts took the lead with 11 minutes gone when Lars Stindl's curling free-kick was headed home by Elvedi.

Dortmund roared back with two goals inside six minutes, both created by Jadon Sancho for Haaland, who fired home his first from a tight angle on 22 minutes.

After Jude Bellingham won the ball back for Dortmund, great footwork by Sancho then again unpicked Gladbach's defence for Haaland to blast his side 2-1 ahead on 28 minutes.

However, another Stindl free-kick on 32 minutes could only be parried by Roman Buerki and Elvedi tapped home the rebound from close range to make it 2-2 at the break.

Gladbach regained the lead five minutes into the second-half when Bensebaini swung in a shot which curled outside Buerki's grasp.

Dortmund conceded their third goal of the night from a set-piece when Thuram headed home a Florian Neuhaus corner 11 minutes from the whistle.

It was the France forward's first appearance after suspension for a spitting at an opponent last month.

Mönchengladbach Football
Get the latest updates on SA vs IND 2021-22, check out the Schedule and Live Score . Like us on Facebook or follow us on Twitter for more sports updates. You can also download the NDTV Cricket app for Android or iOS.