Bundesliga: Bayer Leverkusen's thumping 4-1 win over Werder Bremen moved them to within a point of the top four. 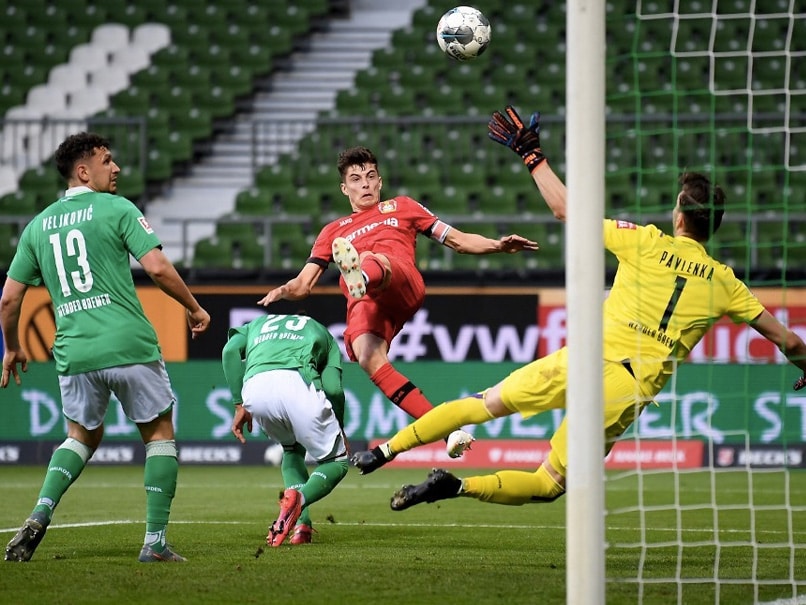 Kai Havertz has scored 12 goals in all competitions this season, having netted 20 times last term.© AFP

Kai Havertz scored twice as Bayer Leverkusen ended the first round of Bundesliga matches in over two months with a 4-1 win at Werder Bremen on Monday which moved them to within a point of the top four. The visitors went into the game only four points behind fourth-placed RB Leipzig after their fellow Champions League hopefuls' 1-1 draw with Freiburg on Saturday, when the Bundesliga became the first major league to resume during the coronavirus pandemic. Attacking midfielder Havertz, reportedly a transfer target for some of Europe's biggest clubs including Liverpool and Barcelona, was the star of the show at an empty Weserstadion.

He has scored 12 goals in all competitions this season, having netted 20 times last term.

It was Leverkusen's 10th win in 11 games, but their first since winning 3-1 at Rangers in the Europa League last-16 first leg on March 12.

After a slow start to the game in an eerie atmosphere similar to the weekend's matches, with all games being played behind closed doors, the encounter burst into life with three goals in five minutes.

The 20-year-old Havertz nodded Leverkusen into a 28th-minute lead, before Bremen right-back Theodor Gebre Selassie levelled on the half-hour mark.

Peter Bosz's side wrapped up a comfortable victory with second-half goals from Mitchell Weiser and Demirbay.

The heavy defeat leaves Bremen stuck in the drop zone, five points adrift off the relegation play-off spot and nine from safety, albeit with a game in hand.

Bremen have spent only one season, the 1980-81 campaign, outside the top flight since the formation of the Bundesliga in 1963.

Werder Bremen Football
Get the latest updates on IPL Auction 2023 and check out  IPL 2023 and Live Cricket Score. Like us on Facebook or follow us on Twitter for more sports updates. You can also download the NDTV Cricket app for Android or iOS.