Packed to capacity, the stadium where Chapecoense Real were thrilling their fans just 10 days ago held an anguished tribute to the 50 players, coaches and staff whose coffins were laid out on the pitch. 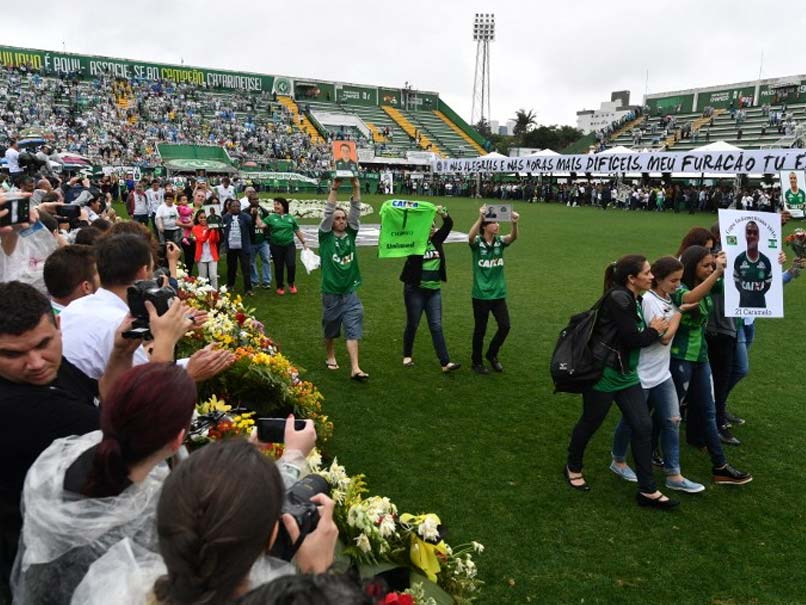 Brazilians mourn the the death of Chapecoense players in Chapeco on Saturday.© AFP

In a driving rain, the small Brazilian city of Chapeco held a massive funeral Saturday for its football team, tragically wiped out in a plane crash in Colombia.

Packed to capacity, the stadium where Chapecoense Real were thrilling their fans just 10 days ago held an anguished tribute to the 50 players, coaches and staff whose coffins were laid out on the pitch.

Draped in the club's green and white flag, the victims' coffins arrived home from Colombia on Saturday morning, then wound their way through the city in a slow funeral procession as fans braved the weather to watch.

Soldiers unloaded the coffins when they arrived at the stadium, where the city had prepared for an overflow crowd of 100,000 people -- half its population.

Two giant screens were set up outside for those who could not get inside the 19,000-capacity venue.

The southern city's bishop read out a message from Pope Francis, who said he was "shocked" by the Monday night accident that killed 71 people.

Chapeco is in mourning for its little team that could, cut down at the height of its glory.

The unsung club was having a fairytale season until the charter plane flying it to the biggest match in its history ran out of fuel and slammed into the mountains outside Medellin.

Soaking wet from the rain, his eyes red from crying, mechanic Rui Alonso Thomas watched the procession with his 10-year-old daughter, who was draped in the Chapecoense banner.

"We came to every match, rain or shine. Our dream was finally becoming reality. It was so close. There's just no explaining it," he said, choking back tears.

"Chapeco will take a long time to get over this. But I plan to keep coming to the stadium."

'My son was all passion'

Inside the stadium, a single set of goal posts remained -- the one star goalkeeper Marcos Danilo Padilha, 31, defended in the semi-final match with a heroic last-minute save that sealed Chapecoense's trip to the finals.

"It's very sad remembering not only that stop (against Argentina's San Lorenzo), but also... him running across the grass with his arms wide open. My son was all passion," said the goalkeeper's mother, Ilaide Padilha.

Earlier, fireworks lit up the sky over the stadium as two Brazilian Air Force planes transporting the team's coffins touched down at the Chapeco airport.

The arrival was delayed by an outpouring of emotion at a refueling stop along the way, when locals in the Amazon city of Manaus flocked to the airport to pay tribute to the crash victims.

Brazilian President Michel Temer met the planes on arrival and attended the memorial alongside the coach of the Brazilian national team, Tite, and FIFA chief Gianni Infantino.

"We will be with you always," Infantino said.

The club's rowdiest fans, a young group of drum-banging die-hards, then lay their instruments on the grass for a final minute of silence.

The crash has left the football world in mourning.

A minute's silence for the team will be held before every Champions League and Europa League game next week.

In Spain, Brazilian superstar Neymar arrived for Barcelona's "clasico" against Real Madrid with Chapecoense's jersey draped over his shoulder.

In Brazil, other clubs have offered Chapecoense players so it can continue competing.

Chapecoense had been on their way to Medellin for the finals of the Copa Sudamericana, South America's second-biggest club tournament.

The other crash victims -- Brazilians, Bolivians, a Paraguayan and a Venezuelan -- were flown home Thursday and Friday.

Six people miraculously survived, though some with major injuries.

From his hospital bed, where he will undergo observation for 48 hours, he told local TV channel ATB he planned to keep flying.

"This is just a small setback," he said.

Authorities are still investigating the crash.

The Bolivia-based charter company, LAMIA, has had its permit suspended.