Barcelona Through In Champions League As Liverpool Suffer Shock Loss

Liverpool were strong favourites away to Red Star in Serbia, but Jurgen Klopp's team were poor in a 2-0 defeat to the 1991 European Cup winners. 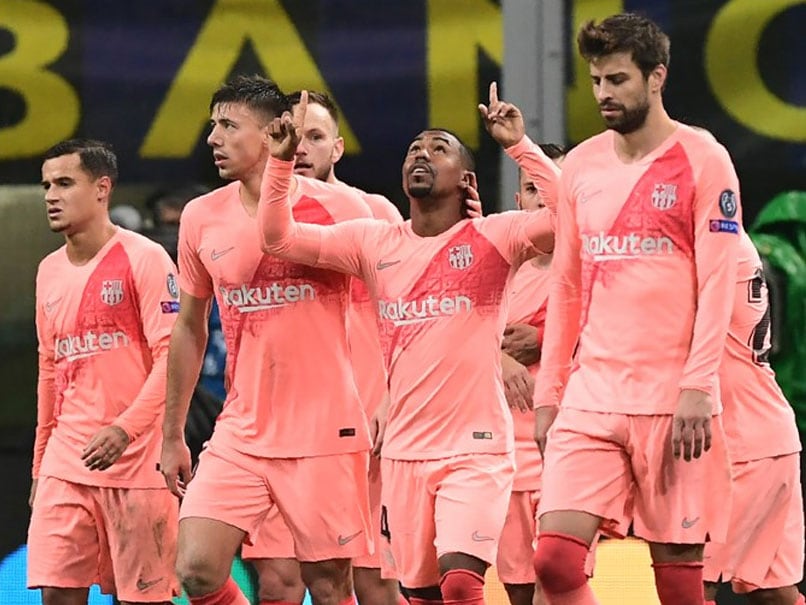 Lionel Messi was still missing for Barcelona at the San Siro.© AFP

Barcelona secured their place in the Champions League knockout stage on Tuesday with a 1-1 draw away to Inter Milan, as Harry Kane revived Tottenham Hotspur's hopes but Liverpool slumped to a shock defeat. Last year's runners-up were beaten by Red Star Belgrade, although the biggest losers on the night were Thierry Henry's Monaco, who were eliminated following a resounding loss to Club Brugge. Lionel Messi was still missing for Barcelona at the San Siro, and it was substitute Malcom who came off the bench to give the Spanish champions a late lead.

But Inter hit back to earn a point thanks to Mauro Icardi's 87th-minute leveller, keeping the three-time former winners on course to join Barcelona in qualifying for the last 16 from Group B.

Tottenham remain in the hunt, however, after Kane's late brace secured a 2-1 win over PSV Eindhoven.

The Dutch side had got off to a superb start at Wembley, taking the lead when Luuk de Jong headed home in the second minute.

Mauricio Pochettino's team were starting to get desperate when skipper Kane equalised with 12 minutes left, and he headed home in the 89th minute with the help of two deflections as Spurs got their first win of the campaign.

"We had to dig deep and find another level when it mattered. The whole season we've been grinding out results here and there," said Kane.

Liverpool were strong favourites away to Red Star in Serbia, but Jurgen Klopp's team were poor in a 2-0 defeat to the 1991 European Cup winners.

Milan Pavkov scored twice in seven first-half minutes, heading in the opener and then beating Alisson with a powerful strike from range, to the delight of a huge home support.

The defeat exposes the Anfield club to the threat of an early elimination in Group C, with Napoli coming from behind to draw 1-1 at home to Paris Saint-Germain in the night's other game.

Kylian Mbappe set up Juan Bernat to put Paris ahead just before the break, but Lorenzo Insigne beat Gianluigi Buffon from the penalty spot in the second half as these sides played out a draw for the second time in a fortnight.

"This is a difficult group but we saw with Liverpool losing that everything is possible," said PSG's Julian Draxler. "A draw in Naples is not bad and we still have our fate in our own hands."

Liverpool and Napoli are locked on six points from four games, with PSG one behind and Red Star another point adrift. Liverpool travel to the French capital in their next game.

Meanwhile, Atletico Madrid gained revenge for a 4-0 defeat away to Borussia Dortmund last month as Diego Simeone's side defeated the Germans 2-0 in Spain, Saul Niguez and Antoine Griezmann scoring the goals.

The two favourites in Group A are not guaranteed a path to the last 16 yet, however, after Club Brugge claimed a stunning 4-0 win at Monaco.

The Belgians had not won a Champions League match since 2005, but they were 3-0 up midway through the first half at the Stade Louis II. Hans Vanaken scored twice, including a penalty, and the Brazilian Wesley belted in the third before Ruud Vormer sealed the win.

Semi-finalists in 2017, Monaco are now eliminated. It was a dreadful display from a side who have not won in 15 games, including five matches under Henry.

This result also came on the day the club's Russian billionaire owner Dmitry Rybolovlev was arrested in a corruption investigation.

"We started well, but once we fell behind we stopped playing and that's a little bit worrying," said Henry of his team's performance.

Porto are on the brink of qualification from Group D after a 4-1 win at home to Lokomotiv Moscow. They lead the section by two points from Schalke, who defeated Galatasaray 2-0 in Gelsenkirchen.

Tottenham Hotspur Red Star Belgrade
Get the latest updates on IPL Auction 2023 and check out  IPL 2023 and Live Cricket Score. Like us on Facebook or follow us on Twitter for more sports updates. You can also download the NDTV Cricket app for Android or iOS.