The delay means Barcelona will not have a new regime in charge for the last week of the January transfer window, while Lionel Messi's future is set to remain unresolved for a while longer. 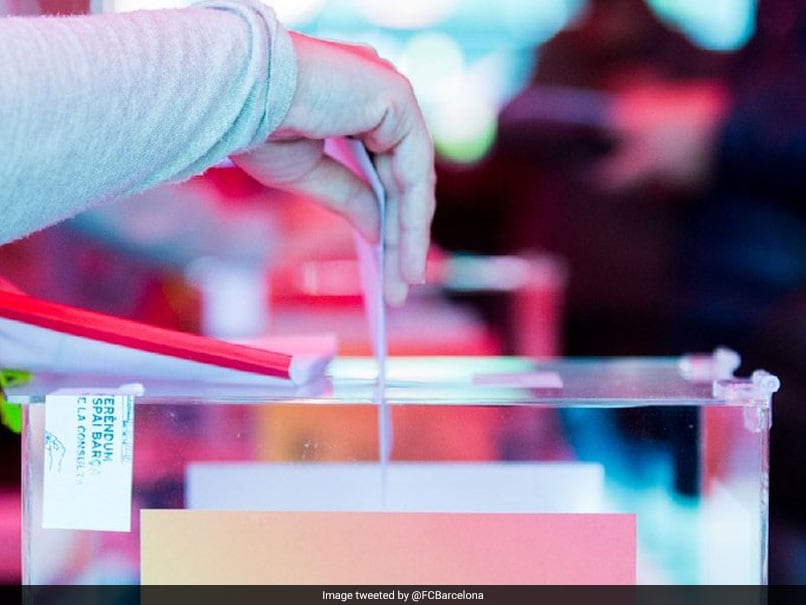 Barcelona announced that presidential elections have been postponed after a rise in coronavirus cases.© Twitter

Barcelona announced on Friday that the club's presidential elections have been postponed after a rise in coronavirus cases prompted heavy restrictions in the region. The elections were set for January 24 but the Catalonian government told the club on Friday morning that exceptions to the rules would not be made to allow people to vote. The delay means Barcelona will not have a new regime in charge for the last week of the January transfer window while Lionel Messi's future is set to remain unresolved for a while longer.

Messi's contract expires at the end of June, when he could leave the club for free, having failed in an attempt to secure an exit last summer.

A new date has not been set for the elections but the club said in a statement it would ask the Catalonian government to allow people to vote by post.

The statement read: "For its part, the club has understood the impossibility of holding elections on the scheduled date due to mobility restrictions decreed by the Catalan Government in the current context of pandemic, which is why the date of the elections must be delayed."

"In this sense, the club has asked the Catalan Government to evaluate the possibility of modifying the current sports legislation in order to enable voting by post on the new date of the elections, a request that the Government has undertaken to study."

Joan Laporta, Victor Font and Toni Freixa are the three candidates who will stand after each gained the required number of signatures from club members. Laporta and Font are considered the two favourites to win.

Laporta was Barca president between 2003 and 2010, overseeing the appointment of Pep Guardiola as coach and his hugely successful first two years in charge.

Laporta also claims to enjoy a close relationship with Messi and insists the Argentinian can be persuaded to stay.

Font, meanwhile, has framed himself as the candidate for the future, although he has also been clear Messi signing a new contract would be a priority.

Font has been keen to emphasise his close ties with Xavi Hernandez, the club's former midfielder touted as a potential replacement for Ronald Koeman as coach.

Laporta, Font and Freixa are bidding to succeed Josep Maria Bartomeu, who brought his turbulent tenure as president to an end in October, following mounting pressure from fans and his public falling out with Messi.

After a dismal year on the pitch, Barca fans will hope a new president brings a fresh start but the winning candidate will be constrained by the club's dire financial situation, caused by an enormous wage bill and worsened by the consequences of the pandemic.

Shortly before Bartomeu resigned in October, Barcelona had announced losses of 97 million euros for the previous season, with debt more than doubling to 488 million euros.

The team is third in La Liga, seven points behind Atletico Madrid, who have two games in hand.

An interim board has been led by Carles Tusquets since October. The three candidates will meet with Tusquets later on Friday when a new election schedule could be confirmed.

Xavi Football
Get the latest updates on ICC T20 Worldcup 2022, check out the Schedule and Live Score. Like us on Facebook or follow us on Twitter for more sports updates. You can also download the NDTV Cricket app for Android or iOS.