Emiliano Sala hometown in rural Argentina is remembering him as a modest local hero who shied away from the flashy wealth of many South American footballers who make it big in Europe. 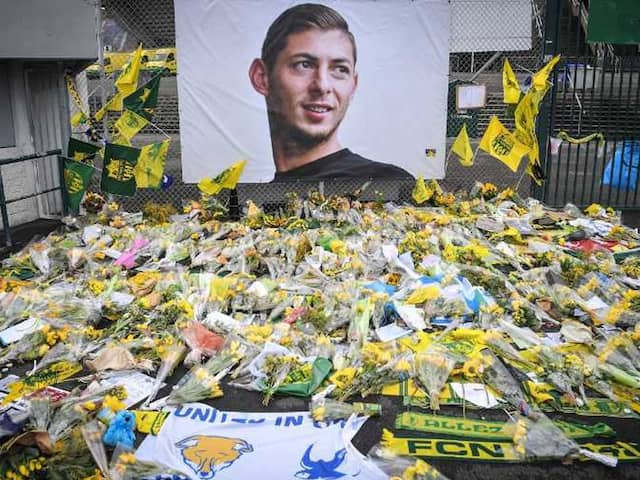 Flowers are displayed in front of the portrait of Emiliano Sala at the Beaujoire stadium in Nantes.© AFP

Emiliano Sala's hometown in rural Argentina is remembering him as a modest local hero who shied away from the flashy wealth of many South American footballers who make it big in Europe. Sala's body was identified as the one recovered Wednesday from a plane that went down January 21 in the English Channel. The light aircraft was carrying the 28-year-old star from France to his new Premier League team, Cardiff City. The pilot, David Ibbotson, also died. The player's father, Horacio Sala, is so distraught that he did not leave home on Thursday and is avoiding the news media, people in the town said.

"Since we found out, it's all anyone can talk about," said restaurant owner Oscar Heymo, a friend of the father. "He was very much loved and admired by all."

Heymo said that in Progreso, a town of 3,000 in the fertile eastern Argentine Pampas region, everybody knows everybody.

He said he could not bring himself to go see the father, who had become something of a legend in his own right around town because of the success of his son.

"You cannot imagine the pain this has caused," said Heymo.

Sala the player was a hero in town. When he came back on vacation from stints with his former team FC Nantes in France, he would play football with local kids.

Sala lived here from age three to 15. While other Argentine players who are groomed in Europe come back driving fancy cars, Sala was described by locals as having kept a humble, quiet profile.

"He was good, but honestly no one expected him to reach the elite level," said Diego Solis, who coached Sala when he was young.

"He was a great person. He never talked about himself. He just asked about everybody else," said Solis.

Mayor Julio Muller said people in town tried to follow FC Nantes games to see Sala play but it was not easy.

They were proud of him and talked about each goal he scored.

"His passion was football. That is why he got so far," the mayor said.

Sala's disappearance sparked an outpouring of grief and a flood of cash to support a private hunt for the missing plane when the official search was initially called off.

The mayor said that the day Sala was reported missing, it was like an earthquake had struck in Progreso.

"There is a before and an after," Muller said. He called Sala "our ambassador."