Antoine Griezmann was unable to add to his tally of 133 goals in 257 games across all competitions in what became a bitter end to his five successful seasons for Atletico Madrid. 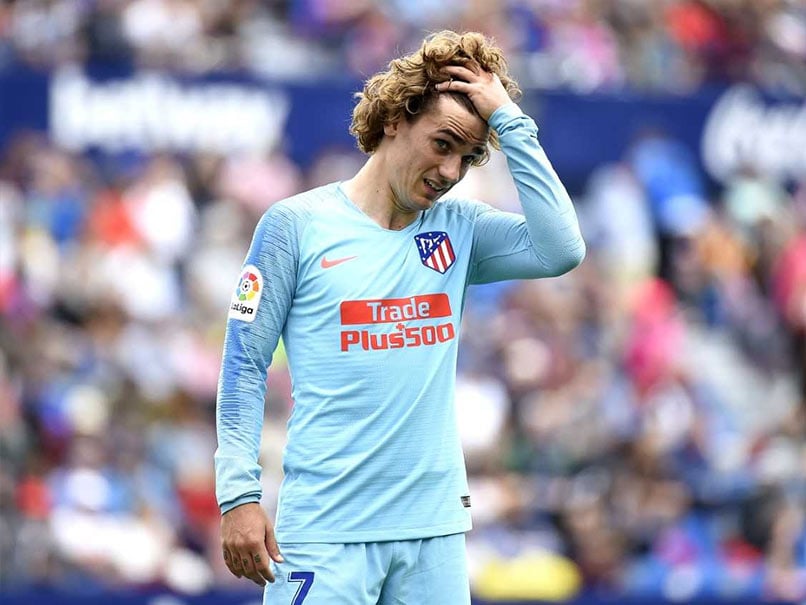 Atletico Madrid came from behind to draw 2-2 against Levante in La Liga on Saturday.© AFP

Antoine Griezmann was jeered during his last game for Atletico Madrid and Rodrigo might have scored his final goal for the club as they came from behind to draw 2-2 against Levante in La Liga on Saturday.

Griezmann received whistles at the City of Valencia Stadium from the visiting fans, who were also heard chanting "out, out, out" before goals from Sergio Camello and Rodrigo ensured Atletico at least ended the season with a draw.

"We had to highlight the work of the gladiators who are leaving," Atletico Madrid coach Diego Simeone said afterwards.

"Their greatest legacy is not the titles won, it is their commitment and respect. I love them very much."

Simeone has dismissed fears of a mass exodus, despite both Diego Godin and Griezmann already announcing their departures, with the likes of Rodrigo, Juanfran and Filipe Luis all expected to follow.

If this was to be their farewell outing for Atletico, it was an underwhelming finale as Levante, who only secured safety from relegation last weekend, claimed a deserved point.

They might have been disappointed not to take all three after leading 2-0 at half-time thanks to goals from Erick Cabaco and Roger Marti before then playing against 10 men for the best part of 40 minutes after Angel Correa was sent off.

"We could have won 3-0, but we relaxed." said Levante coach Paco Lopez.

Atletico fought back, Rodrigo firing into the top corner before 18-year-old substitute Camello scored his first goal for the club, finishing at the back post.

Simeone's side finish second again with 76 points, three fewer than last season. They come in above Real Madrid for a second consecutive year but will end up 13 points behind Barcelona, if the Catalans win away at Eibar on Sunday.

Griezmann was unable to add to his tally of 133 goals in 257 games across all competitions in what became a bitter end to his five successful seasons for the club.

Godin was given a rousing goodbye ceremony at the Wanda Metropolitano last weekend but the timing of Griezmann's announcement, perhaps deliberately, meant he avoided a last meeting with the Atleti fans.

But those that made the trip to Valencia were determined to make their displeasure known and it was noticeable that Griezmann made a swift exit after the final whistle.

Camello, born in Madrid and a product of Atletico's academy, delivered a more positive message for the future and a timely reminder of Atletico's ability to endure in recent years, despite the departures of their biggest stars.

"Football has no age limits," Simeone added. "We will never stop making use of everything we can to ensure the club keeps growing."

Levante took the lead through a brilliant opener from Cabaco, who flicked in with the back of his heel after a header back from Ruben Vezo.

Roger doubled the advantage shortly before half-time, intercepting a loose pass from Thomas Partey before skipping over Rodrigo and firing past Antonio Adan, who was standing in for the injured Jan Oblak.

Atletico's task became more difficult when Correa was sent off for a petulant kick on Chema but Rodrigo gave them hope with a stunning strike into the top corner, before Koke's shot fell kindly for Camello at the back post.

Antoine Griezmann Football
Get the latest updates on ICC T20 Worldcup 2022 and CWG 2022 check out the Schedule, Live Score and Medals Tally. Like us on Facebook or follow us on Twitter for more sports updates. You can also download the NDTV Cricket app for Android or iOS.