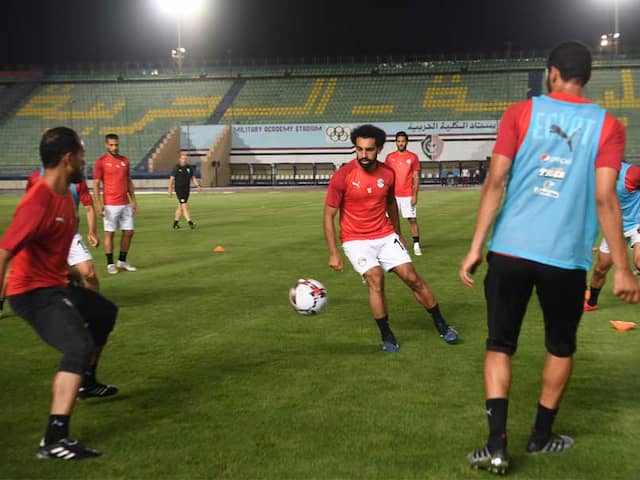 All eyes will be on Mohamed Salah on Friday© AFP

All eyes will be on Mohamed Salah on Friday as the Egypt star looks to help the Africa Cup of Nations hosts launch their bid for a record-extending eighth title in style against Zimbabwe in the opening match of a tournament expanded to 24 teams for the first time. After avenging last year's Champions League anguish with Liverpool three weeks ago, Salah is now on a mission for redemption with the Pharaohs after injury wrecked his World Cup campaign in Russia -- ruining Egypt's return to the global showpiece after a 28-year absence.

Egypt top the betting as favourites to lift the trophy in Cairo on July 19 and have won the competition as hosts three of the previous four times, with the last of those in 2006 sparking an unprecedented run of three successive triumphs.

Authorities are confident the infrastructure is in place to host the continent's largest football contest, awarded to Egypt at just six months' notice, and which kicks off against a backdrop of terror attacks and only days after the death of former Islamist president Mohamed Morsi.

Players will also have to contend with average temperatures of between 35 and 38 Celsius (95-100.4 Fahrenheit) following the decision to switch the tournament from its traditional January/February time slot to June/July to avoid European club-versus-country clashes.

Egypt coach Javier Aguirre is confident of capturing a second international title, a decade on from leading his native Mexico to CONCACAF Gold Cup glory.

"We are the favourites to win the 2019 Africa Cup," said the 60-year-old Aguirre, the first Mexican to guide the Egyptian national team.

"Egypt are playing at home, can count on passionate support and have Mohamed Salah, the best footballer in Africa."

Salah has returned home after another stellar season with Liverpool, which he completed by scoring the first goal in a 2-0 Champions League final victory over Tottenham Hotspur.

Aguirre says fears that his talisman may be jaded after a long season of Premier League and Champions League football are unfounded.

"Mohamed took a holiday after the Champions League final, did not play in our first warm-up match and only came on after half-time in the second," he countered.

Egypt beat fellow qualifiers Tanzania and Guinea and what pleased Aguirre most was not the results, but the large number of scoring chances the Pharaohs created.

"We had about 20 chances to score against the Tanzanians and almost as many against the Guineans. That is very encouraging."

Aguirre also dismissed the view that Egypt rely too heavily on Salah, saying: "We have selected 23 footballers who are totally committed to the cause of winning the Cup of Nations.

"It is impossible for one footballer to win a Cup of Nations on his own. Mohamed will receive tremendous support from his team-mates.

"All the players are mentally and physically ready and we look forward to beginning our campaign with a victory over Zimbabwe."

The countries have met only once in a Cup of Nations with Egypt winning 2-1 in Tunisia 15 years ago and both teams were eliminated after the first round.

Zimbabwe coach and former captain Sunday Chidzambwa was keeping his thoughts to himself ahead of the tournament opener.

But captain and forward Knowledge Musona, who plays in Belgium, stressed that they must not become obsessed by Salah, despite the huge threat he poses.

"We must not just stop Salah, we must stop all the Egyptians. If we concentrate only on one, others will destroy us," he warned.

"We are not here to talk -- we are here to play football. We are in Egypt to achieve success and make every Zimbabwean proud of us.

The Democratic Republic of Congo and Uganda are the other teams in Group A and they meet Saturday at the same venue as the opening match.

Group winners and runners-up qualify for the knockout second round along with the best four of the six third-place finishers.

Egypt Mohamed Salah Football
Get the latest Cricket news, check out the India cricket schedule, Cricket live score . Like us on Facebook or follow us on Twitter for more sports updates. You can also download the NDTV Cricket app for Android or iOS.