Swiss midfielder Granit Xhaka had set Arsenal on their way with his fourth goal of the season. 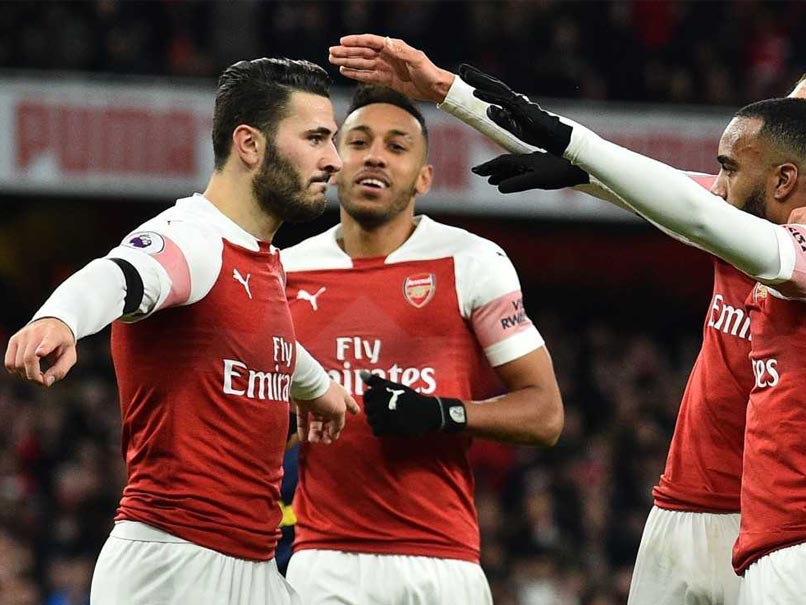 Arsenal responded to their thrashing by Liverpool in the best possible manner.© AFP

Arsenal responded to their thrashing by Liverpool in the best possible manner reeling off a routine 4-1 humbling of struggling Fulham in their Premier League clash on Tuesday. Swiss midfielder Granit Xhaka had set Arsenal on their way with his fourth goal of the season. Alexandre Lacazette added the second after 55 minutes with their momentum temporarily halted as Aboubakar Kamara pulled one back after 69 minutes. However, Welshman Aaron Ramsey came off the bench to make it 3-1 eleven minutes from time and Pierre-Emerick Aubameyang added a fourth.

Arsenal have yet to keep a clean sheet since beating Huddersfield Town on December 8, but a second win in six matches saw them move on to 41 points two points off the Champions League places.

Fulham have shown little sign of a recovery under Claudio Ranieri since he took over from the sacked Slavisa Jokanovic and are second from bottom.

The visitors did have their chances early on to break the deadlock.

First Fulham captain Tom Cairney sent Ryan Sessegnon clear of defenders with the simplest of passes only for the England under-21 star to sidefoot his shot wide of Bernd Leno's goal.

Then Andre Schurrle hit a dangerous low cross from the left and Sessegnon ran in behind Sead Kolasinac only to miskick with the goal at his mercy.

Fulham paid dearly for that miss in the 25th minute as Arsenal exposed the defensive frailties that have blighted their season.

Alex Iwobi spotted Xhaka advancing unmarked into the penalty area and flighted the ball into his path.

The midfielder had all the time he needed to control the ball and poke it past Fulham goalkeeper Sergio Rico.

A second goal arrived ten minutes into the second half.

It was Arsenal at their intricate, quick-passing best.

Iwobi, on the left, touched the ball forward to Aubameyang, who saw Kolasinac advancing inside him and rolled it into his path. The defender unselfishly squared for Lacazette to hit the ball past Rico from ten yards.

Kamara briefly gave Fulham hope when he made amends for Saturday's controversial penalty miss at home to Huddersfield -- he had insisted on taking the spot kick himself -- by arriving at the far post to convert Sessegnon's low cross.

The Gunners, though, put the game to bed 11 minutes from time.

Matteo Guendouzi and Kolasinac opened Fulham up down the left, Aubameyang smacked Kolasinac's low cross against the post and the rebound fell to Ramsey, who shot high past Rico's left hand.

Aubameyang made it 4-1 after 83 minutes when Fulham failed dismally to clear a corner and the Gabon striker's shot was deflected over Rico by Tim Ream's attempt to block.

Fulham English Premier League Arsenal vs Fulham, Game week 21 Football
Get the latest updates on T20 World Cup, check out the T20 World Cup Schedule and Live Score . Like us on Facebook or follow us on Twitter for more sports updates. You can also download the NDTV Cricket app for Android or iOS.