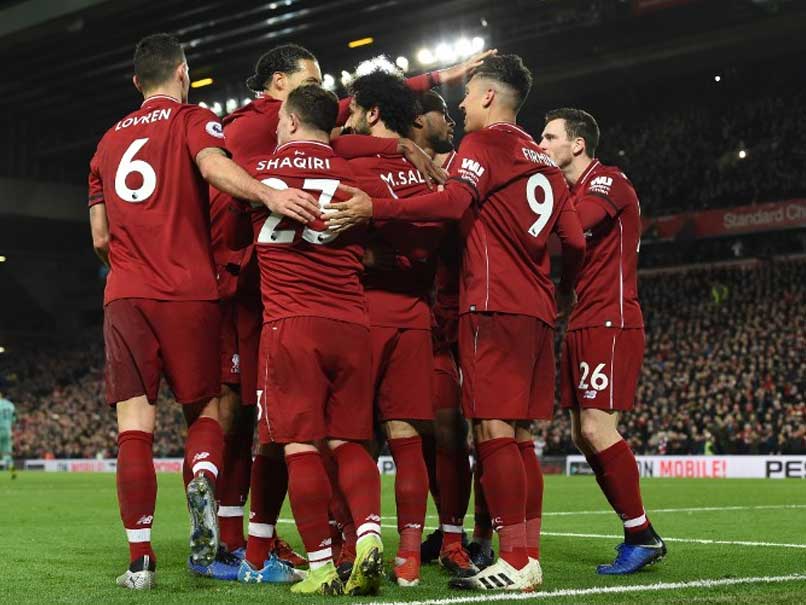 Liverpool had trailed at home in the league for the first time in a day short of a year.© AFP

Liverpool roared back from a rare Anfield deficit to move nine points clear at the top of the Premier League as Roberto Firmino's hat-trick inspired a 5-1 thrashing of Arsenal on Saturday. Mohamed Salah and Sadio Mane were also on target as Liverpool's front three all scored in the same league game for the first time this season. Liverpool had trailed at home in the league for the first time in a day short of a year when Ainsley Maitland-Niles turned home Alex Iwobi's excellent cross 11 minutes in.

However, the lead lasted just three minutes as Firmino profited from some calamitous Arsenal defending to level and then left Shkodran Mustafi and Sokratis Papastathopoulos on the floor to score his second goal in three minutes.

Mane and Salah's penalty had the game wrapped up by half-time and Firmino completed his hat-trick from the spot as Jurgen Klopp's men extended their unbeaten league start to 20 games and took another significant step towards a first league title since 1989/1990.

"The reaction was obviously absolutely brilliant," said Klopp. "We haven't conceded too many goals this season, especially the first one, so you don't know what the reaction would be."

Manchester City now trail the pacesetters by 10 points and, even if they reduce that lead to seven with victory at Southampton on Sunday, the champions need to end Liverpool's invincible season so far when the sides meet on Thursday at the Etihad to get back in the title race.

However, Klopp repeated his plea of recent weeks for his players not to get carried away.

"We never thought about that," he said of Liverpool's nine-point advantage. "It's a supporters and journalists game, but we cannot be a part of it."

Tottenham's title ambitions suffered a huge blow as Wolves scored three times in the final 18 minutes to win 3-1 at Wembley earlier on Saturday to further embolden Anfield with belief before kick-off.

"For sure Tottenham's result people out there reacted, but not inside the dressing room where they were completely concentrated on the match and not allowed to have that influence our game," added Klopp.

That confidence could have been shaken when after a bright Liverpool start, it was Arsenal who led when Iwobi's teasing cross perfectly dissected Alisson Becker and Virgil van Dijk, to leave Maitland-Niles with an open goal.

But after a slow start, Salah, Firmino and Mane are beginning to show the form they did last season in smashing a combined 91 goals.

Firmino didn't even have to look at the ball when he slotted the equaliser into an empty net after Sokratis's attempted clearance rebounded off Mustafi into his path to quickly level.

However, the Brazilian did all the hard work himself two minutes later by jinking through Arsenal's hapless central defensive pairing before drilling low past, Bernd Leno.

"It's a difficult moment for us," said Arsenal boss Unai Emery, whose side could slip five points adrift of the top four if Chelsea wins at Crystal Palace on Sunday.

"We spoke in the dressing room, it is another experience for us, but from bad experiences, you learn."

Mane made it 3-1 on 32 minutes when Salah cushioned a cross perfectly into the Senegalese's path to side-foot high into the net.

And Liverpool was given the chance to extend their lead just before half-time when Salah tumbled under pressure from Sokratis in the box.

Leno got a touch to the Egyptian's spot-kick but couldn't stop Salah moving level with Pierre-Emerick Aubameyang and Harry Kane as the Premier League's top scorer on 13.

Salah gave up the chance to move clear in the race for the golden boot when Sead Kolasinac pushed Dejan Lovren 25 minutes from time and Firmino gratefully fired home the penalty much to his manager's delight.

"Mo Salah gave the penalty to Bobby and I almost cried because we all know how much Mo wants to score goals," added Klopp.

"It was one of the nicest things I've ever seen in my life, just outstanding. So far the gesture of the season."

Manchester City English Premier League Mohamed Salah Roberto Firmino Shkodran Mustafi Football
Get the latest updates on ICC T20 Worldcup 2022 and CWG 2022 check out the Schedule, Live Score and Medals Tally. Like us on Facebook or follow us on Twitter for more sports updates. You can also download the NDTV Cricket app for Android or iOS.