Mohamed Salah's 11th goal of the season was a classy one and helped subdue a dangerous Wolves side who had made a lively start. 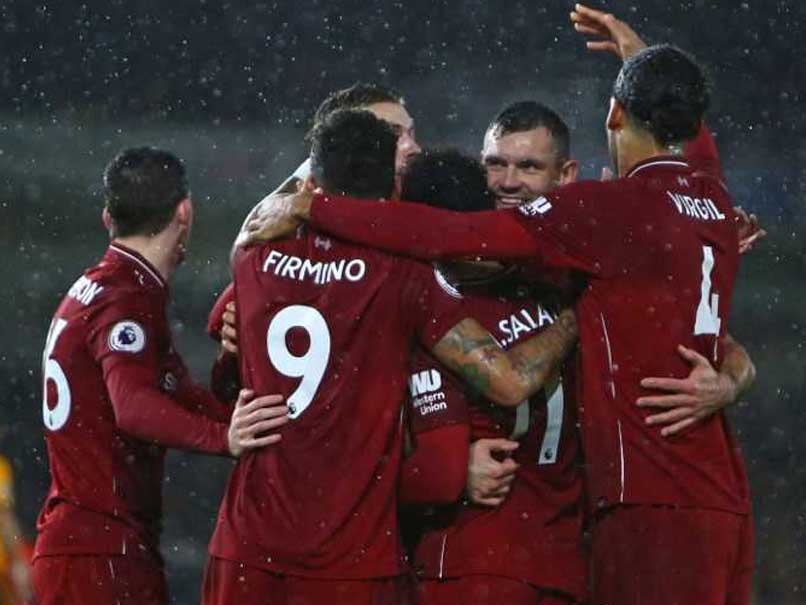 Liverpool have struggled at times to match the attacking potency of Manchester City.© AFP

Liverpool passed another stringent test of their Premier League title credentials as Mohamed Salah and Virgil van Dijk gave them a 2-0 victory at Wolverhampton on Friday that guarantees top spot at Christmas. Salah's 11th goal of the season was a classy one and helped subdue a dangerous Wolves side who had made a lively start. The home side continued to push Jurgen Klopp's side hard but their resistance was finally broken with 22 minutes remaining as Van Dijk capped a superb performance with a goal that cemented his side's position at the top of the table with 48 points.

Manager Jurgen Klopp said: "The first goal was brilliant, it was cool. And the second goal - yes, well done. I'm completely happy with the result and it is big for us.

"We will be training on Christmas morning so it is like every other day. It is an outstanding number (of points), it is absolutely cool."

While Liverpool have struggled at times to match the attacking potency of Manchester City, who they face on January 3, their added defensive steel has made them serious contenders for their first title of the Premier League era.

In the first half at a wet, windy Molineux they showed signs that some of the swagger that marked them out as the league's great entertainers last season is returning.

Salah linked up impressively with Sadio Mane and Robert Firmino in attack and Klopp's side might have added to their tally earlier than they did.

Then, when Wolves managed to blunt Liverpool's attacking threat, their defence clicked into gear to silence a dangerous frontline with Van Dijk in outstanding form at the heart of Klopp's back four.

Klopp's men endured a nervous opening when, in the fourth minute, Fabinho's lapse in concentration saw his pass intercepted by Joao Moutinho. Moutinho fed Adama Traore but he curled a shot narrowly wide.

Traore threatened again moments later when he was supplied by the solid link-up play of Raul Jimenez before again shooting just off target.

Early chances were scarce for the visitors and when one arrived, with James Milner's corner dropping kindly for Van Dijk, the Dutchman's shot was charged down by Matt Doherty.

A fine move from Wolves almost brought the opening goal when Conor Coady's superb pass and Doherty's neat touch release Romain Saiss, whose shot was well saved by Alisson after it had taken a deflection off Dejan Lovren.

Liverpool had been on the back foot but there was no denying the quality of their opening goal, scored by Salah on 18 minutes.

Fabinho was the architect with a driving run and a neat one-two with Sadio Mane before he crossed for Salah to prod home deftly with his outside of his left foot.

The Reds pushed for a second and Rui Patricio saved well from James Milner but there were chances for Wolves, too, with Alisson forced to save from Jonny Castro Otto.

Wolves' pressing was making life hard for Klopp's side, but they doubled their lead and effectively sealed their win with 22 minutes remaining.

A corner was cleared as far as Salah, who delivered a teasing cross from which Van Dijk stretched to turn the ball home.

Morgan Gibbs-White should have halved Liverpool's lead late on but the Wolves youngster fired into the side netting.

Wolverhampton English Premier League Football Wolverhampton vs Liverpool, Game week 18
Get the latest updates on India vs Australia and check out  Schedule, Results and Live Score. Like us on Facebook or follow us on Twitter for more sports updates. You can also download the NDTV Cricket app for Android or iOS.