Manchester United manager Jose Mourinho claimed ahead of the game that the league leaders have had luck. 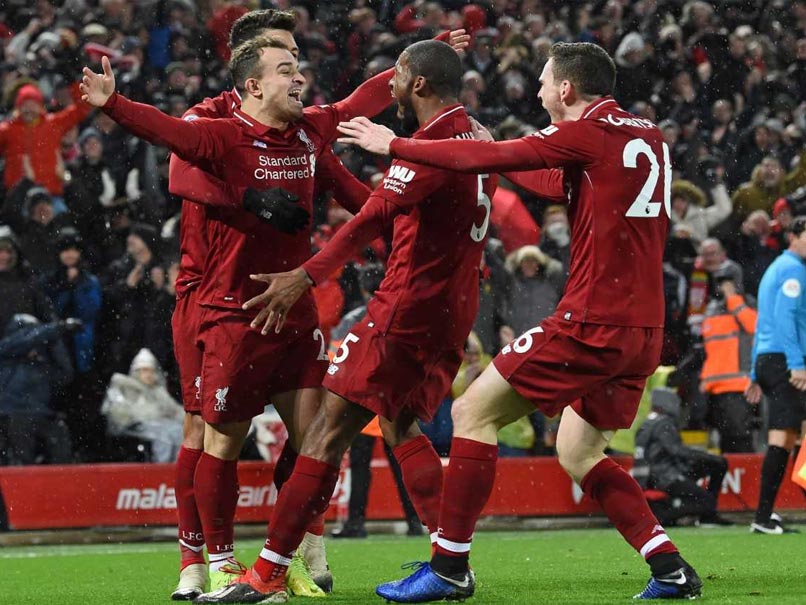 Two deflected Xherdan Shaqiri strikes handed Liverpool victory over Manchester United in the Premier League for the first time in nine attempts as Jurgen Klopp's men moved back to the top of the table with a 3-1 win at Anfield on Sunday. United manager Jose Mourinho claimed ahead of the game that the league leaders have had luck on their side this season, but while there was fortune in substitute Shaqiri's two goals in the final 17 minutes, the visitors did not deserve anything more than a fifth defeat of the season. Liverpool leapfrogged Manchester City to finish the weekend where they started, a point clear at the top, and move a mammoth 19 clear of United, who remain in sixth and are now 11 points off the top four.

The contrasting form showed by both sides this season continued as United strained to keep a rampant Liverpool at bay and were only level for so long thanks to a huge error by home goalkeeper Alisson Becker.

Sadio Mane had given Liverpool the lead before Jesse Lingard levelled when Alisson dropped a routine cross at the feet of the England international.

United had the ball in the net first on a rare foray forward but Romelu Lukaku was flagged offside despite not getting a touch to Ashley Young's free-kick.

But Liverpool then laid siege to the visitors' goal with David de Gea stretching to keep out a low drive from Roberto Firmino, Young clearing off the line and Fabinho firing wide from the edge of the box.

Only Manchester City have kept Klopp's side from scoring in the Premier League this season and a United defence that has kept just one clean sheet in the league since September never looked capable of holding out like they had in their two previous visits to Anfield.

Mourinho's men were finally breached when Mane controlled Fabinho's chipped ball into the box on his chest and volleyed past the onrushing De Gea.

However, Liverpool's momentum was punctured by an Alisson gift 12 minutes before the break.

The Brazilian was Liverpool's hero with an injury-time save to secure the Reds' place in the last 16 of the Champions League against Napoli on Tuesday.

But he spilled Lukaku's simple cross into the path of the grateful Lingard to bundle the ball into an unguarded net.

The second half followed a similar pattern with one-way traffic towards the Kop as Liverpool sought the goal to take them back to the top of the table.

Jurgen Klopp turned to Shaqiri to unlock the United defence 20 minutes from time and the Swiss international needed just three to put Liverpool back in front.

De Gea did well to prevent Ander Herrera turning Mane's cross into his own net, but the ball fell for Shaqiri and his effort cannoned off Young and in off the underside of the bar.

Seven minutes later, Shaqiri got lucky again when, this time on his favoured left foot, his shot flicked off the diving Eric Bailly to leave De Gea helpless.

Manchester United English Premier League Liverpool vs Manchester United, Game week 17 Football
Get the latest updates on ICC T20 Worldcup 2022 and CWG 2022 check out the Schedule, Live Score and Medals Tally. Like us on Facebook or follow us on Twitter for more sports updates. You can also download the NDTV Cricket app for Android or iOS.