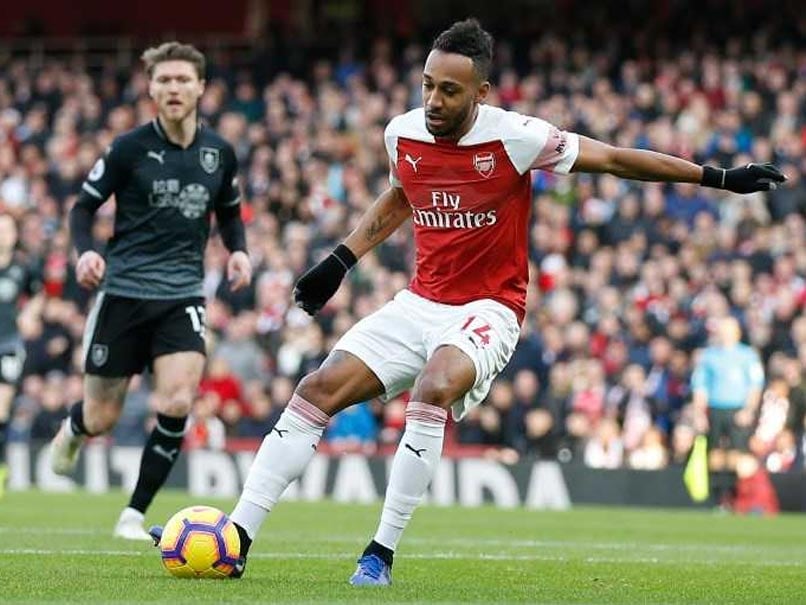 Pierre-Emerick Aubameyang scored on either halves of the break against Burnley.© AFP

Pierre-Emerick Aubameyang scored twice as Arsenal returned to winning ways with a 3-1 victory against Burnley on Saturday as Mesut Ozil was restored to the starting line-up as captain. Former Germany international Ozil has been on the fringes of Unai Emery's team in recent weeks but was quickly into the thick of the action at the Emirates, playing a key role in Aubameyang's opener. That goal helped end a statistical quirk as it meant Arsenal led at half-time of a Premier League game for the first time this season.

Aubameyang smashed a rasping shot past Burnley goalkeeper Joe Hart shortly after the restart to earn his side some breathing space.

An Ashley Barnes strike for the visitors reduced the deficit and Arsenal fans had some nervy moments before substitute Alex Iwobi made sure of all three points.

Ozil was not in the squad for Wednesday's League Cup quarter-final defeat to Tottenham and had not started in the league since November 11.

He was one of six changes from last week's defeat at Southampton as Alexandre Lacazette was recalled, Sead Kolasinac started following a thigh problem and Mohamed Elneny came in for his first Premier League action of the campaign.

The 30-year-old Ozil was a mainstay in the Gunners side under previous manager Arsene Wenger but Emery has shown he has no issue with keeping the club's highest-paid player on the sidelines.

Ozil's lack of game-time, partly due to a back problem, has led to rumours linking him with a January move away from the club.

Both sides had early chances in the early kick-off in the Premier League but the Gunners took the lead following a delightful move in the 14th minute.

Arsenal toyed with the Burnley defence, looking for an opening, until Ozil played an incisive pass that found Kolasinac. His cutback was tucked away by Aubameyang.

It was Aubameyang's 11th Premier League goal of the season, taking him level at the top of the charts with Liverpool's Mohamed Salah.

He pulled ahead of the Egyptian in the 48th minute, smashing the ball high past Hart after a speedy counter-attack.

Barnes pulled a goal back for the visitors after Arsenal failed to clear in the 63rd minute.

The home side lost their way following that goal but sealed the win in added time, when Iwobi pounced.

Arsenal, who remain fifth in the Premier League, had gone 22 matches unbeaten in all competitions before last weekend's defeat to Southampton and lost at home to Spurs in their midweek League Cup quarter-final clash.

Burnley Pierre-Emerick Aubameyang Alex Iwobi Ashley Barnes English Premier League Football Mesut Ozil
Get the latest updates on IPL Auction 2023 and check out  IPL 2023 and Live Cricket Score. Like us on Facebook or follow us on Twitter for more sports updates. You can also download the NDTV Cricket app for Android or iOS.