Arsenal overcame a resolute Huddersfield to stretch their unbeaten run to 21 games. 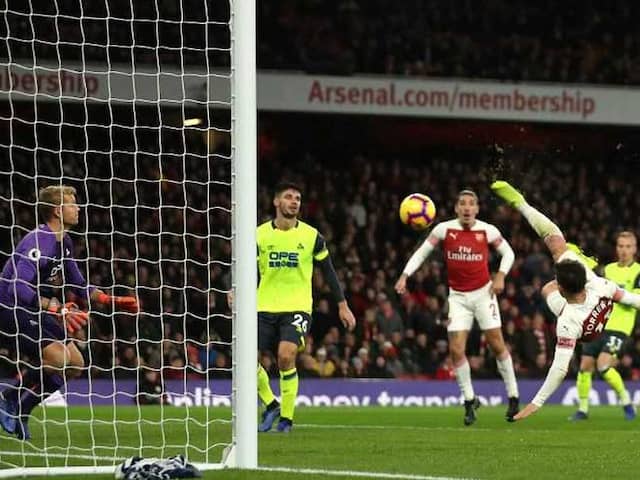 Lucas Torreira rode to Arsenal's rescue as the Uruguayan's impressive start to life as a Gunner continued with an overhead kick winner seven minutes from time to beat an obdurate Huddersfield 1-0 at the Emirates in the Premier League. Torreira hooked home a Pierre-Emerick Aubameyang cross from close-range, yet the image that will endure of a feisty contest that saw Arsenal stretch their unbeaten run to 21 games will be of three of their players collecting yellow cards for simulation. Granit Xhaka, Shkodran Mustafi and Matteo Guendouzi were all booked by referee Paul Tierney for flinging themselves to the ground.

Mustafi and Guendouzi were trying to fool the referee into awarding a desperate home side a penalty, while Xhaka was simply trying to earn his side a free-kick unjustly in the middle of the pitch.

That desperation to make the breakthrough summed up a frustrating afternoon for Unai Emery's men until Torreira's late intervention.

Emery again demonstrated a ruthless streak as after another fitful first-half display from his side, he made a double substitution at half-time.

His introduction of Henrikh Mkhitaryan and Alex Iwobi triggered an Arsenal performance that was more centred on a determination to attack rather than to become embroiled in trading tackles, as they had in the first half.

The desire of the Huddersfield players not to give their Arsenal counterparts a moment to dwell on the ball in midfield earned them the wrath of the Emirates crowd and no doubt influenced referee Tierney to caution Alex Pritchard, Danny Williams and Tommy Smith all within eight minutes of each other.

Xhaka, one of five Arsenal players to see yellow, was at least responsible for the game's opening chance after 28 minutes. His intelligent ball to the near post ought to have been converted by Aubameyang. Yet, instead of meeting the ball with his right foot, the striker tried to use his left but could only stab the ball wide.

If that was a bad miss, Aubameyang was outdone by Alexandre Lacazette 60 seconds later. The Frenchman was found all alone inside the area by Guendouzi. He dallied too long and then slipped, scooping the ball embarrassingly over the bar from 12 yards.

Two minutes before half-time, Pritchard ought to have given Huddersfield the lead, swivelling to strike a Smith cross high and wide.

Finally the match was livening up and at the other end Torreira saw his curling effort from outside the area brilliantly palmed away for a corner by Huddersfield keeper Jonas Lossl.

While the second half wasn't replete with chances, Mkhitaryan sent a low effort just wide within two minutes of his introduction, while Iwobi drove Arsenal forward constantly as they searched for the decisive goal.

Emery will have defensive problems to deal with over the festive period as Mustafi limped off just after the hour with an apparent hamstring injury, adding to the long-term absence of Rob Holding due to a cruciate knee ligament injury suffered in midweek.

However, the Spanish coach at least had another three points to console him when Torreira furthered his case as a cult hero among the Arsenal support with a spectacular finish to move the Gunners above Tottenham into third in the Premier League.

Huddersfield Town English Premier League Arsenal vs Huddersfield Town, Game week 16 Football
Get the latest Cricket news, check out the India cricket schedule, Cricket live score . Like us on Facebook or follow us on Twitter for more sports updates. You can also download the NDTV Cricket app for Android or iOS.