The fall-out from Maurizio Sarri's astonishing row with Kepa Arrizabalaga threatens to cause further damage in a crucial London derby against Tottenham. 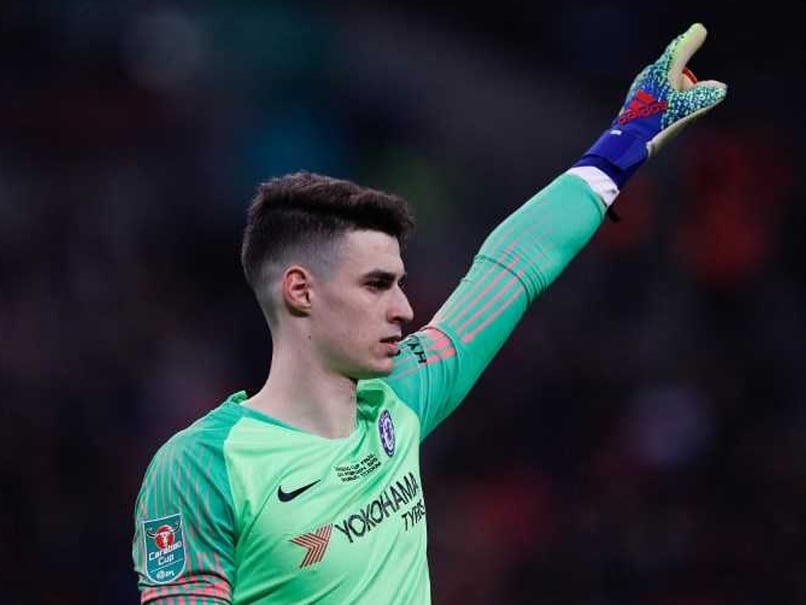 All eyes will be on the Chelsea team sheet at Stamford Bridge on Wednesday as the fall-out from Maurizio Sarri's astonishing row with Kepa Arrizabalaga threatens to cause further damage in a crucial London derby against Tottenham Hotspur. Chelsea boss Sarri was furious when Blues goalkeeper Kepa refused to be substituted after needing treatment in the closing stages of Sunday's League Cup final against Manchester City. Chelsea eventually lost 4-3 on penalties after a goalless draw, but that blow paled in comparison to the problems caused by Kepa's rebellious behaviour and Sarri's raging response on the Wembley touchline.

Sarri was already fighting to avoid the sack amid reports the Italian has lost the backing of his players due to his stubborn tactics, dull training methods and habit of publicly criticising them.

The sight of Kepa staging a mutiny in the middle of Chelsea's biggest game of the season laid bare the problems Sarri has been struggling to resolve.

He tried to regain control of the situation by claiming the incident was a "big misunderstanding" caused by a delay in getting information from the team doctor about the extent of Kepa's injury.

That hardly excused Kepa from such disrespectful behaviour and few could have been convinced by the Spaniard's insistence his actions were misinterpreted because he had no intention of disobeying Sarri.

Meanwhile, watching Sarri rip open his training top and storm down the tunnel during the Kepa row hardly inspired confidence that he has the composure required to navigate such a treacherous predicament.

He looks set to remain in charge for the Tottenham match at least.

Now the question is whether Sarri, who said he didn't plan to discipline Kepa, will allow the keeper to retain his place in the team.

"What he Sarri has to do now is to make sure Kepa knows that he was in the wrong," former Chelsea star Pat Nevin said.

"That absolutely does weaken his position and make it look as if the player had more power than him."

Letting Kepa get away with such insubordination would be a huge gamble, even though Blues defender David Luiz insists Chelsea's stars still respect Sarri.

"I'm sure if Kepa knew the coach wished to change him he would have come off because he is a great professional. He is a great boy and would respect that," Luiz said.

"The coach has the power over the group. He has our respect."

Sarri's team have lost four of their last seven games, a painful period that has seen them drop to sixth in the Premier League, crash out of the FA Cup and lose the League Cup final.

It is even more frustrating for Sarri as Chelsea's dismal run started just after they showed signs of a revival by beating Tottenham in the League Cup semi-final.

That rare success is a distant memory now and Sarri must hope the Wembley fiasco can somehow trigger a siege mentality in his team.

With Chelsea already three points adrift of fourth place, another defeat could be the end for the sorry Sarri era after less than a season.

Meanwhile, Mike Dean has been removed from fourth official duties at the Bridge to avoid further conflict with Tottenham manager Mauricio Pochettino.

Pochettino marched across the pitch following Saturday's defeat at Burnley to confront Dean in a heated exchange that earned him an improper conduct charge from the Football Association.

Pochettino was seething about key decisions that contributed to Tottenham's first defeat in five league games.

Tottenham are six points behind leaders Liverpool, but the one bright spot was Harry Kane's goal-scoring return after six weeks out with an ankle injury.

"We don't always want to be having to react from a poor result. But we'll dust it off. We've still got a lot to play for," Kane said.

"We're in the hunt for the Premier League, we're still in the Champions League so we're in a good place."

Tottenham Hotspur Kepa Arrizabalaga English Premier League Chelsea vs Tottenham Hotspur, Game week 28 Football
Get the latest updates on IPL Auction 2023 and check out  IPL 2023 and Live Cricket Score. Like us on Facebook or follow us on Twitter for more sports updates. You can also download the NDTV Cricket app for Android or iOS.