Primoz Roglic climbed to third overall behind Alaphilippe and Adam Yates as he edged home Tadej Pogacar in the fourth stage of the Tour de France. 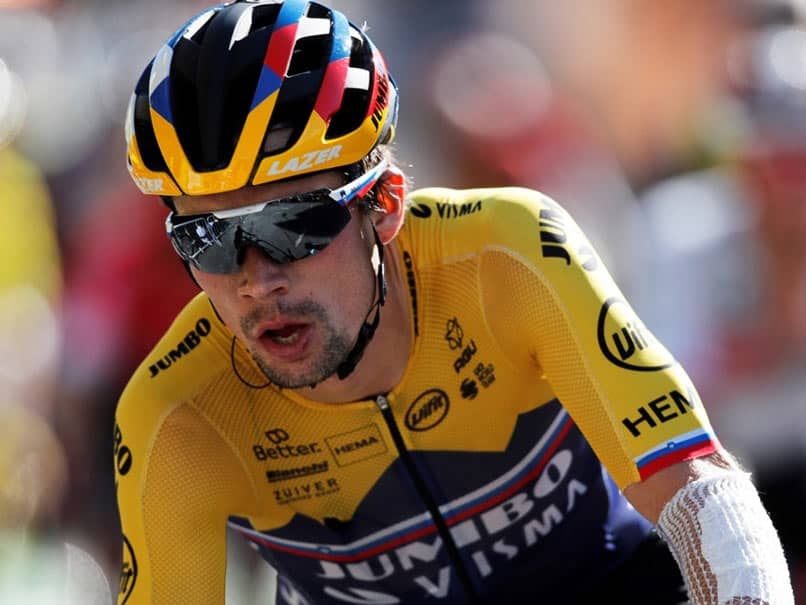 Primoz Roglic has been billed as the favourite to win the Tour de France.© AFP

Race favourite Primoz Roglic edged Tuesday's first summit finish of the Tour de France to win the fourth stage, but failed to drop any of his key rivals in the process, including overall leader Julian Alaphilippe. On a perfect day for racing, Roglic climbed to third overall behind Alaphilippe and Adam Yates as he edged home his Slovenian compatriot Tadej Pogacar on the rolling 160.5km run to the finish line situated 1,850m above sea level.

The Alpine stage had been billed as the moment the true form of the various contenders would be revealed and it was here in 1971 that great Spanish climber Luis Ocana beat Eddy Merckx by nine minutes.

Nothing of that nature emerged on Tuesday, as the desperate jostling and posturing over the final kilometre of the 7.1km climb ascent to Orcieres-Merlette -- at a 6.7 percent average incline -- culminated with 16 riders finishing on the same time, with the top three taking small time bonuses of 10, six and four seconds.

The key weapon Roglic has in his armoury is his fabulous strength which gives him an irresistible late kick, and while he used this to win, defending champion Egan Bernal and fancied Frenchman Thibaut Pinot also held on.

"It was quite a hard day actually and it was a nice win," said former ski jumper Roglic, who has kept a low profile since a horrible crash saw him pull out of last month's Criterium Dauphine before the final stage despite leading the race.

"I feel a little better every day, not quite the same as I was but I saw on stage two that I could still ride a bike," added Roglic, who had to chase Alaphilippe after the home favourite's stage-winning performance on Sunday.

"Deceuninck (Alaphilippe's team) set a high pace, so I knew we were just racing for the win today and not the overall lead.

"We know what kind of champion Julian is, we saw last year he almost finished top.

"Thibaut (Pinot) is also a threat."

Jumbo very hard to keep up with

Colombian Bernal was once again on his own in the final section of the climb but kept his powder dry until rising from his saddle once Roglic put the hammer down just 400m from the finish line, hanging comfortably with the select group of around 20 who kept up.

Alaphilippe said it had been a testing day.

"If we learned one thing, we learned that Jumbo are very difficult to keep up with," said the Deceuninck leader who will don the overall leader's yellow jersey for a third straight day on Wednesday.

Alaphilippe led the Tour for 14 days last year before wilting to fifth in a brutal finale in the Alps.

"Jumbo have been strong for a while now," he added.

"They are clearly here to win the Tour, but trust me, they have a great deal of work still to do."

After Miguel Angel Lopez's spectacular face-first crash into a signpost on stage one, it was the turn of Sunweb's Tiesj Benoot to have a close shave.

The 26-year-old Belgian was part of the escape group flying downhill when he hit a roadside barrier and skidded along it until his saddle snapped off and he flew head-over-heels into a field, escaping without a scratch. Lopez said Tuesday he still had a sore jaw and hip.

Wednesday's fifth stage runs through the Rhone valley from Gap to Privas in the wild, semi-deserted Ardeche region known for its chestnuts and boars.

The stage is expected to climax with a mass bunch sprint unless there is a crosswind.

Comments
Topics mentioned in this article
Cycling
Get the latest updates on India vs England Series, India vs England , live score and IPL 2021 Auction . Like us on Facebook or follow us on Twitter for more sports updates. You can also download the NDTV Cricket app for Android or iOS.