After being humiliated by 121 runs in the first match last week, Zimbabwe drew level with a six-wicket victory on Sunday, preventing Bangladesh from extending their unbeaten run in bilateral one-day series to three. 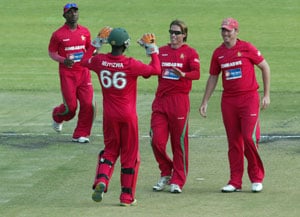 Zimbabwe and Bangladesh go into Wednesday's third and final one-day international in Bulawayo locked at one match apiece, yet it is the hosts who know they will need to improve their game if they are to claim a rare series victory.

After being humiliated by 121 runs in the first match last week, Zimbabwe drew level with a six-wicket victory on Sunday, preventing Bangladesh from extending their unbeaten run in bilateral one-day series to three.

However Zimbabwe have enjoyed the benefit of bowling first in both matches so far, with early morning starts giving their seam bowlers an advantage against Bangladesh's strong top order - none of whom have registered telling scores as a result.

Tamim Iqbal, Mohammad Ashraful, Mushfiqur Rahim and Shakib Al Hasan remain some of the most dangerous batsmen on either side, yet none have passed 34 in the series thus far.

"They are always a side that is very threatening," Zimbabwe captain Brendan Taylor said.

"Some of their big players have not fired so that's a concern for us.

"However if we can bowl well like we have been bowling up front it's always going to be tough to score. Hopefully we can execute our skills better and get over the line."

Having shared the two-Test series 1-1, both sides will see Wednesday's match as an opportunity to confirm a modicum of superiority ahead of two Twenty20 internationals at the weekend.

Comments
Topics mentioned in this article
Cricket Bangladesh Cricket Team Zimbabwe Cricket Team
Get the latest updates on ICC T20 Worldcup 2022 and CWG 2022 check out the Schedule, Live Score and Medals Tally. Like us on Facebook or follow us on Twitter for more sports updates. You can also download the NDTV Cricket app for Android or iOS.