Anticipating trouble due to Pakistani players' participation in the event, to be held in Mumbai, the BCCI had sought the ICC's help in taking a final call on whether to stick to the original venue or change it for the team from across the border in order to avoid security hassles. 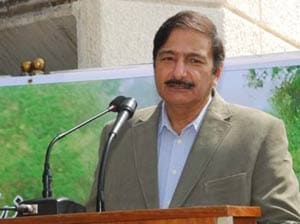 With the BCCI being skeptical about hosting the Women's World Cup in Mumbai due to simmering tension on the Indo-Pak border, Pakistan Cricket Board chief, Zaka Ashraf, on Wednesday suggested that the quadrennial extravaganza be shifted to South Africa.

Anticipating trouble due to Pakistani players' participation in the event, to be held in Mumbai, the BCCI had sought the ICC's help in taking a final call on whether to stick to the original venue or change it for the team from across the border in order to avoid security hassles.

"Women's World Cup is an ICC event and if the security is not good enough in India, then the world governing body should consider shifting it to a neutral venue like South Africa or somewhere," he said.

"I would want to leave it on ICC to decide. The entire tournament has to go to a neutral venue and a few matches cannot be shifted to another country and rest play somewhere else.

"It has to be in a peaceful manner. If it happens in India then there should be proper security arrangement, otherwise it could be shifted to a neutral venue," Ashraf told a private news channel.

The PCB chief insisted that South Africa could be a good alternative, in case India fails to provide security to the Pakistani women's team.

"ICC is still considering options and trying to look for venues where cricket can be played. South Africa could be a good option because of the weather, good infrastructure and strong cricket at the domestic level," he said.

Asked if he is keen on the tournament be shifted to South Africa, Ashraf said, "I am not saying that. The first option should be India but if the BCCI is unable to host it then I am saying the second option could be South Africa."

Ashraf, however, said that he was open to the idea of Pakistan's matches bing held in cities other than Mumbai where the state is willing to give security.

"There is no problem. As far as arrangements and security are concerned, if BCCI can provide those it is fine."

Reacting to reports that the ICC might decide to go ahead with the tournament in India without the Pakistan team, Ashraf said "it is an international event and I don't think ICC can say that".

"Definitely, Women's World Cup cannot take place without Pakistan. We haven't heard anything like that. They (ICC) cannot say that without Pakistan the event will go on. I think that looks a bit strange because Pakistan is a full member and we have a very good women's team.

"So if the tour has to go on in India, the security has to be provided by the BCCI and the Indian government," Ashraf stressed.

"Our team is getting ready and they are having camps. I am so sorry that there have been some developments in the borders but sports should go on. If we stop sports then people to people contact will be affected. I think everyone should restrain and try to do the damage control," he added.

Ashraf said he had no information regarding the two commentators, Wasim Akram and Ramiz Raja -- they are part of the commentary team for the ongoing India-England ODI series -- being asked to return home.

"I have no information. They are also not aware of any such move. But I will advice them to stay back and I think the government should provide them security," he concluded.

Comments
Topics mentioned in this article
Cricket Football Pakistan Cricket Team
Get the latest updates on ICC T20 Worldcup 2022 and CWG 2022 check out the Schedule, Live Score and Medals Tally. Like us on Facebook or follow us on Twitter for more sports updates. You can also download the NDTV Cricket app for Android or iOS.