Yuzvendra Chahal and Kuldeep Yadav engaged in some banter on Hardik Pandya's Instagram post where he announced his engagement to Natasa Stankovic.

As wishes poured in for Hardik Pandya after he announced his engagement to Serbian actress Natasa Stankovic, Yuzvendra Chahal decided to have a little fun with fellow spinner Kuldeep Yadav. Kuldeep Yadav wished Pandya on Instagram, commenting "Lakh lakh vadhaaiyaan" (many congratulations) on the all-rounder's photo. Chahal came up with a cheeky reply to Kuldeep, writing "ab teri baari" (it's your turn now) in response to his comment. While Chahal had fans laughing with his banter, Kuldeep was not one to give up. 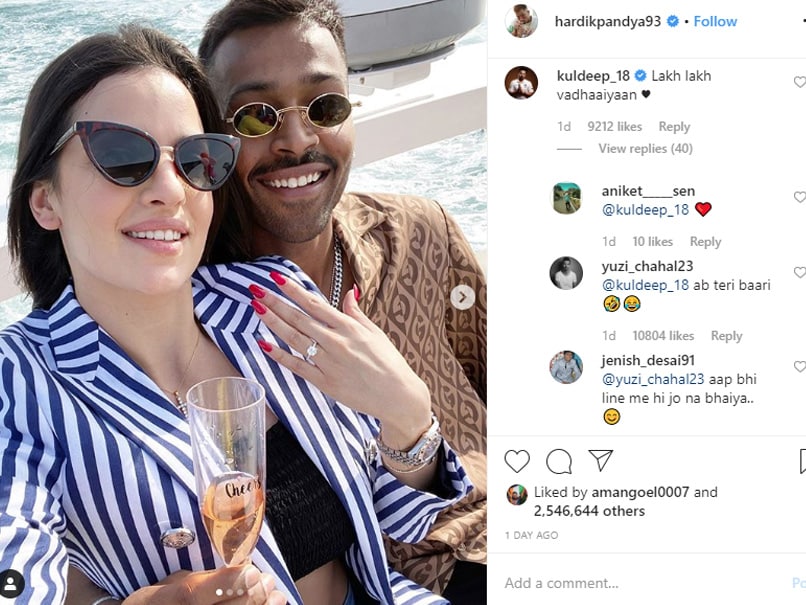 The two spinners, fondly referred to together as "KulCha", are known to share a close bond with each other.

Hardik Pandya had announced his engagement to Natasa Stankovic on Wednesday via an Instagram post with her captioned "Mai tera, Tu meri jaane, saara Hindustan. 01.01.2020 #engaged".

Several of his teammates, including his brother Krunal Pandya and India captain Virat Kohli blessed the couple with their wishes.

Hardik is recovering from a back injury and has missed out on the Twenty20 International (T20I) and One-Day International (ODI) series against Bangladesh and the West Indies.

He will also miss out on India's upcoming home series against Sri Lanka and Australia but the Board of Control for Cricket in India (BCCI) has named him in India A's squad for the New Zealand tour.

Hardik Pandya Cricket
Get the latest Indian Premier League 2020 news, check out the IPL 2020 schedule, Cricket live score . Like us on Facebook or follow us on Twitter for more IPL 2020 updates. You can also download the NDTV Cricket app for Android or iOS.
Highlights
Related Articles

We'll Talk About IPL When "Life Gets Back To Normal": Rohit Sharma To Yuzvendra Chahal

Watch: Yuzvendra Chahal Gets His Cheeks Pulled In TikTok Video