Yuzvendra Chahal had a wicked response to Shikhar Dhawan's failed Instagram attempt to convince wife Aesha to dance with him. 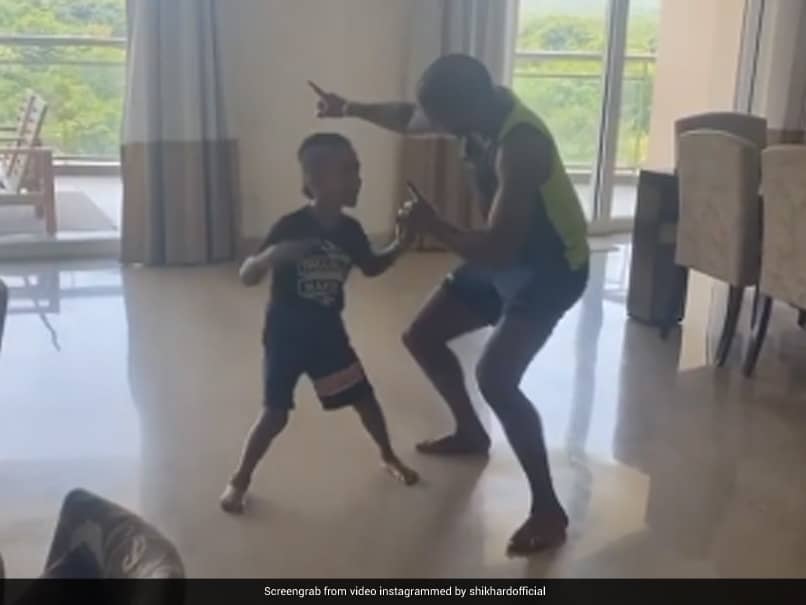 Shikhar Dhawan shared a video on Instagram where he is seen dancing with his son Zoraver.© Instagram

Shikhar Dhawan is among one of the most active Indian cricketers on social media during this extended coronavirus break and he has been entertaining his followers by posting fun videos on a regular basis. On Monday, the left-handed opener posted yet another video on Instagram in which he is seen dancing on a hit Punjabi song with his son Zoraver. In the video, Dhawan can clearly be seen trying to convince his wife Aesha to come and dance with him, with the help of his son Zoraver. Despite all the efforts by the father-son duo, Aesha remains glued to the couch, paying no heed to their request. "Biwi ko manaane ke liye bete ki support lena bhi bada zaroori hai... Aaja nachle @aesha.dhawan5 # Gabbargyaan," Dhawan captioned the video.

More than the dance moves, it was the caption that caught the attention of many people on social media, with his teammate Yuzvendra Chahal among them.

The leg-spinner was quick to react to Dhawan's failed attempt at convincing his wife and came up with tongue in cheek reply. 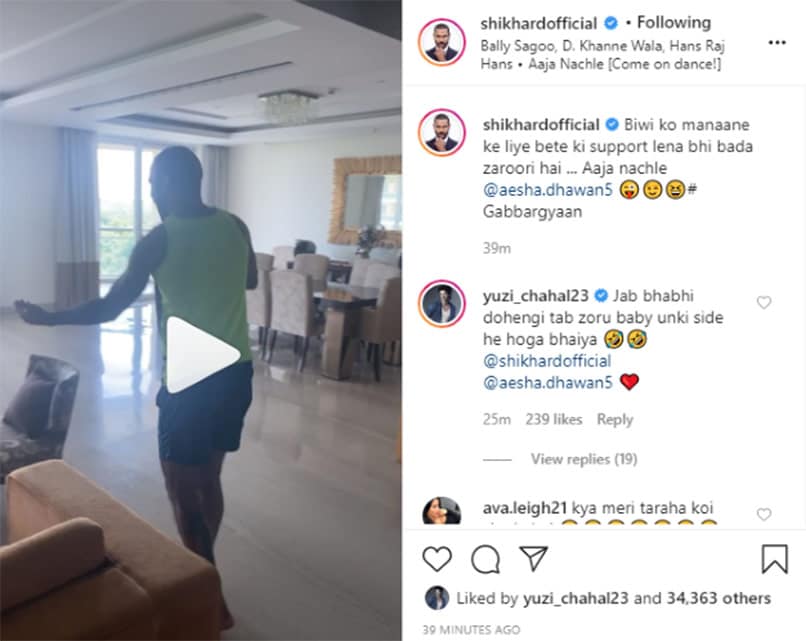 On Sunday, Dhawan had shared a loved-up picture with wife Aesha, which became an instant hit among his followers.

Dhawan used a famous quote from French writer and poet Antoine de Saint-Exupery as a caption for his post. A day later, his wife posted the same picture on her Instagram account with a beautiful message for his "soul mate".

"He has tested me the most in life hahahahaha but that's why he's my soul mate," Aesha wrote on Instagram.

She then went on to elaborate on the true soul mate and why one should always look for a life partner who goes the distance.

"Soul mates are not only about love they are the ones that truly challenge you to grow and keep refining yourself. They are often your greatest teachers too. Find a life partner who goes the distance, travels the journey and is a part of your true growth. @shikhardofficial," she added.

Dhawan, who missed India's tour of New Zealand due to an injury, was all set to return to action during the 2020 Indian Premier League (IPL). But the ongoing health crisis forced the Board of Control for Cricket in India (BCCI) to indefinitely postpone the tournament, which was originally scheduled to start on March 29.

Yuzvendra Chahal
Get the latest updates on IPL 2020, check out the IPL Schedule for 2020 and Indian Premier League (IPL) Cricket live score . Like us on Facebook or follow us on Twitter for more sports updates. You can also download the NDTV Cricket app for Android or iOS.