Who is VVS Laxman?

VVS Laxman's initials gave an opportunity to copy editors to be clever with words. His batting forced most of them to stick to Very Very Special Laxman. 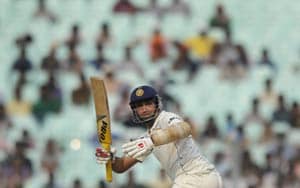 VVS Laxman's initials gave an opportunity to copy editors to be clever with words. His batting forced most of them to stick to Very Very Special Laxman.

Just how special Vangipurapu Venkata Sai Laxman has been for Indian cricket is best heard in the words of Aussie tearaway Brett Lee, who once said, "If you get Dravid, great. If you get Sachin, brilliant. If you get Laxman, it's a miracle."

The 37-year-old Laxman retired over the weekend, forcing selectors to scramble to replace him for the home series against New Zealand starting this week. To replace Laxman in Indian cricket, however, will not be an easy task. He played only 134 Test matches, but has ensured his place in the cricket gallery of greats.  Many of his 17 centuries and 56 fifties in his total 8781 (Ave 45.97) runs came in pressure situations and to win matches for India.

Laxman came to be known as an Australia specialist in a period that saw the Aussies rule World cricket. Laxman was not impressed. He tormented them and scored 2,434 of his runs in 29 Tests against that team at 49.67, which is better than his  overall average.

In a career spanning 16 years, he also played 86 One-Day internationals scoring 2338 runs at an average of 30.76. Again, the most memorable of those innings came against his favourite opposition and in their backyard - he scored back-to-back centuries against Australia in Brisbane and Sydney in 2004.

Fondly called Lachu Bhai by teammates, Laxman, when not plagued by injury, was India's go-to man is all crisis situations. The man also has two double centuries to his credit, but few will forget his knock of  73 not out in Mohali against Australia when India were reeling at 124/8.

Incidentally, his two double centuries too came against Australia - a dream innings of 281 at Kolkata's Eden in 2001 and the knock of 200 at the Ferozeshah Kotla in Delhi in 2008.

The Eden Garden double century is listed by Wisden as one of the 10 greatest knocks in Test cricket ever. The touring Australians, under Steve Waugh, were poised to win the second Test, but India's marathon man put paid to that plan. India followed on 274 runs in arrears, but a 376-run stand between VVS and good friend Rahul Dravid (180), helped the team not only save, but also win the match and end Australia's 16-Test winning streak.

Born on November 1, 1974, Laxman is the great grand nephew of India's second President Dr. Sarvepalli Radhakrishnan. Born into a Telugu Srivaishnava family in Hyderabad and to noted physicians Dr Santharam and Dr Satyabhama, Laxman too enrolled as a medical student. But he decided to follow his heart and chose cricket as a career over medicine. India was one doctor poorer, but Indian cricket found the very very special Laxman.

Laxman is married to G R Sailaja, a computer science post-graduate. They wed on February 16, 2004 and have two children - son Sarvajit and daughter Achinta. 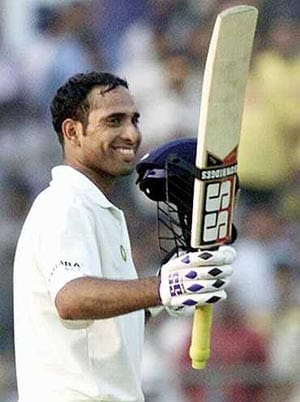 According to Laxman's wife, he follows the Bhagwad Gita to the word. So many years after marriage, she says she is still amazed by his righteousness and humility. That humility and dignified behavior was on display as he retired.

His announcement that he was retiring was so sudden that even his wife, Sailaja said she was taken aback. So were teammates like Sachin Tendulkar who tweeted about it. "When i walk out to play in hyderabad i will feel a deep void. A void that can never be fulfilled. My dear friend, VVS Laxman.... ..one of the best players indian cricket has seen and i have played with will no longer be with me."

There were also whispers that the senior cricketer was upset with the way India's cricket board was treating him. "There have been people who have criticised me but my set of well wishers have been more. I can tell you that it is not easy to please each and every person. Failure and success are part and parcel of a cricketer's life", he explained.

What especially came as a major surprise was that in choosing to retire with immediate effect, he also turned down the opportunity to play a farewell Test in front of his home crowd in Hyderabad, where the first Test against the Kiwis will be played from Wednesday, August 23. But as he announced his retirement, Laxman smiled his gentle smile.

Through his career, he defied pain, defied records, defied the convention and defied all odds to become a true legend and book a place in Indian cricket folklore.

Comments
Topics mentioned in this article
Cricket Rahul Dravid VVS Laxman Sachin Ramesh Tendulkar Sourav Ganguly India Cricket Team
Get the latest updates on ICC T20 Worldcup 2022 and CWG 2022 check out the Schedule, Live Score and Medals Tally. Like us on Facebook or follow us on Twitter for more sports updates. You can also download the NDTV Cricket app for Android or iOS.