When Sachin Tendulkar made debut on Indian soil

With two half-centuries against Pakistan in Faisalabad and Sialkot and a 88 against New Zealand in Napier and a maiden century (119) against England in Manchester, Sachin Tendulkar had already build a huge fan following before playing an international match in India. 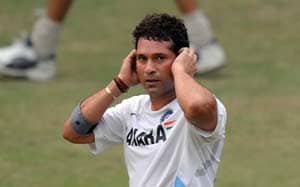 Many winters ago in November, when Sachin Tendulkar took guard on his debut international match on Indian soil here, he had already made a reputation for himself as a young prodigy.

With two half-centuries against Pakistan in Faisalabad and Sialkot and a 88 against New Zealand in Napier and a maiden century (119) against England in Manchester, Tendulkar had already build a huge fan following.

In 1990, Chandigarh was a city, which was thinly populated and few vehicles could be seen on the roads.

The match versus Sri Lanka on November 23rd was played at Sector 16 Cricket stadium here. The teenager, all of 17 then, was the junior most at that time in the company of veterans such as Kapil Dev, Manoj Prabhakar, Navjot Singh Sidhu and Ravi Shashtri among others.

Tendulkar's exploits at the international level had spread far and wide and the stadium was packed to capacity as his young fans cheered for him.

The team was staying at Government-owned Hotel Shiwalik in Sector 17, located barely at a walking distance from the cricket stadium.

Even though Tendulkar failed to impress with the bat, making just 11 runs, his fans cheered for him all the way.

"I remember that many young fans had come to watch that match and Sachin was already a hero. Chandigarh was lucky to host Sachin's first match on the Indian soil," said Vinod Kumar, who watched that match in Chandigarh.

"He was just a school boy then, whose moustaches had barely sprouted. No one knew at that stage that he will go on to become a legend player for all times to come," he added.

Comments
Topics mentioned in this article
Cricket Pradeep Sangwan Navjot Singh Bhagwantsingh Sidhu Sachin Ramesh Tendulkar Manoj Prabhakar Rahul Dravid Ramlal Nikhanj Kapil Dev
Get the latest updates on ICC T20 Worldcup 2022 and CWG 2022 check out the Schedule, Live Score and Medals Tally. Like us on Facebook or follow us on Twitter for more sports updates. You can also download the NDTV Cricket app for Android or iOS.