Prithvi Shaw, who scored a record 546 in a Harris Shield under-16 school match in Mumbai, is a Sachin Tendulkar fan. The cover drive is the favorite stroke for the class nine student. 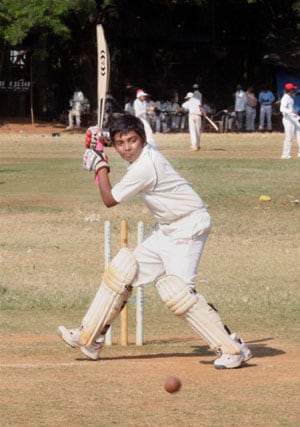 Call it superstition or the Mumbai school of batting which teaches one to put team before self, 14-year-old Prithvi Shaw had categorically told his teammates not to prompt his personal score, which is why he didn't know that he reached 490s during his knock of 546.

"I didn't know when I was in the 490s because I told my teammates not to tell me my score. I was batting well and I wanted to play my natural game. Once I reached 500, my teammates told me and cheered for me," the 14-year-old ninth standard student of Rizvi Springfield told reporters on Wednesday after his record-breaking knock against St Francis D'Assissi. (Read: 10 things to know about Prithvi Shaw)

Asked about his favourite cricketer and youngster said it was none other than Sachin Tendulkar.

"Because he is humble and I like his square cut and pull shot," said Prithvi.

What really surprised him was the presence of the media at the ground.

"I wasn't expecting so much of media people over here," Prithvi said while talking to the reporters at the Azad Maidan after the day's play got over.

Queried on how he planned his innings, Prithvi said, "I was totally blank when I went in today. There were no specific plans. Just concentrated on playing the singles and twos and waited for the loose deliveries."

Asked about the opposition bowling attack, he tried to answer like pros do but ended up being what he is -- a sweet little teenager.

"They had some good bowlers and fielders but at the same time they bowled a lot of loose balls during my batting. They dropped some catches. It wasn't easy for them out there. Some of them were diving catches. To keep my hydration going, I drank lots of water," he said.

The Mumbai U-16 captain started cricket in Virar when he was just four years old.

"When I was four, I started playing cricket. My father didn't know about cricket. Then one of my father's friend advised him to take me to a coaching camp. It was based in Virar. I earlier used to stay in Virar and I was coached by Santosh Pingulkar. Now I train under Raju Pathak and also at the MIG," Prithvi stated.

Unlike boys of his age, who are playing in D division onwards in Mumbai's famous Kanga League, Prithvi has already played in the A division and scored a century.

"I was very happy to score a hundred in the A division because it wasn't easy to play against those guys. I managed to keep my patience and hit the loose balls over there. I played few games before that and wasn't having a good time there. I was getting out after scoring 30s and 40s."

The 14-year-old admitted that playing in England helped improving his technique a lot.

"Over there I gained a lot of experience. It was not easy playing there due to the cold climate but still I managed over there. I was playing lot of matches and the coaches would tell me to play the correct cricketing shots."

He used to travel 70 kms daily from Virar to come to the city for practice and for playing matches, but now Prithvi and his father live in a one-room rented apartment in Santacruz. His father has a small garment business.

"We provide a monthly stipend that takes care of his education, cricket coaching, equipments, proper diet. He has a contract with SG which supplies him with cricket bats," said COO of PMG, Nelroy D'Souza.

Now that he has been named the captain of the Mumbai U-16 squad, he feels there will be a "lot of responsibility" on him as he has to carry on doing well.

His height -- five feet one inch -- is a problem, feel many, but the youngster isn't bothered.

"My height doesn't matter as I want to keep playing my natural game," he said.